What Is IDP In Fantasy Football? 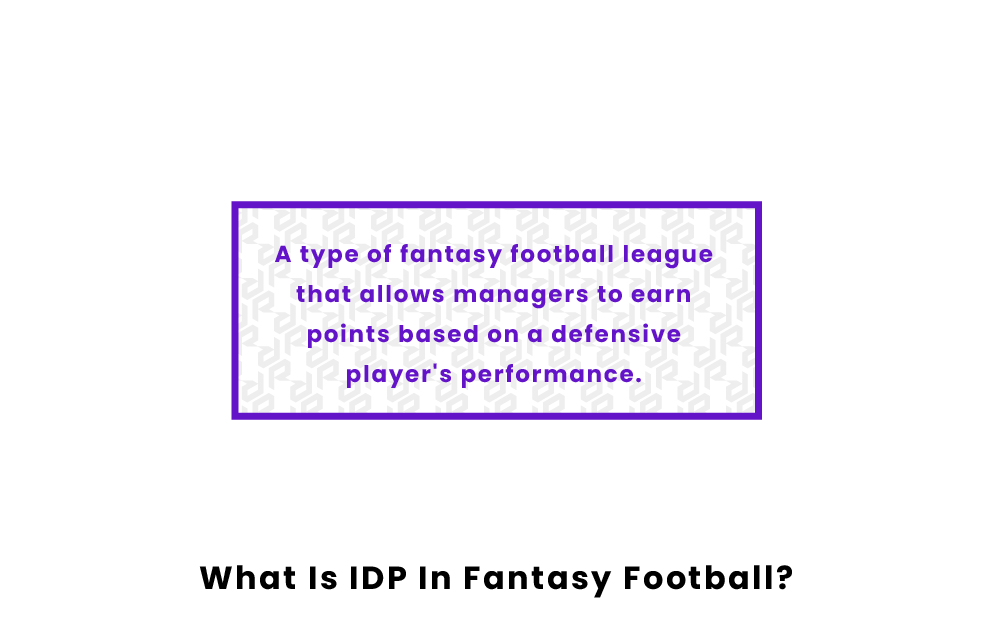 In fantasy football, there are multiple ways to earn points for your team. Depending on the type of league, the methods of scoring vary. While many leagues use a standard defense scoring system, IDP leagues score defense in a different fashion.

What is an IDP League?

IDP leagues differ from traditional fantasy football leagues. For a standard league, team owners draft team defenses that perform and earn points as a single unit. The defense earns their team points based on how many points they allow the offense to score, along with other plays the defense makes, such as interceptions and fumble recoveries. Therefore, an IDP league gives the owner more flexibility and independence but can also pose further challenges.

IDP scoring systems may vary from league to league. Some leagues award more points based on sacks, while others focus on awarding points for regular tackles. Leagues that concentrate on tackles award more points to the players that record the most tackles. These players usually include safeties, middle linebackers, and weak side linebackers in a 4-3 defensive scheme. In a 3-4 defensive scheme, outside linebackers generally don’t accumulate as many tackles and are not as favorable for a tackle-heavy scoring system.

In a scoring system that focuses on sacks, players that record a higher number of sacks earn more points for their team. Therefore, it is important to draft players that are skilled at getting to the quarterback. To be considered a sack-focused scoring league, the ratio of sacks to tackles should be 5 to 1. Therefore, a sack is worth five times the amount of points as a regular solo tackle.

A typical IDP scoring system will look something like this:

What is standard IDP scoring?

Who are some predicted sleepers for 2022 IDP leagues?

According to Fantasy Pros, three prominent IDP sleepers for the 2022 season are Kamu Grugier-Hill, a linebacker for the Houston Texas, Sam Williams, a defensive end for the Dallas Cowboys, and Divine Deablo, a safety/linebacker for the Las Vegas Raiders.

Who are the top ranked defensive rookies for 2022 IDP leagues?

Pages Related to What Is IDP In Fantasy Football?