What Is An Auction Draft In Fantasy Football? 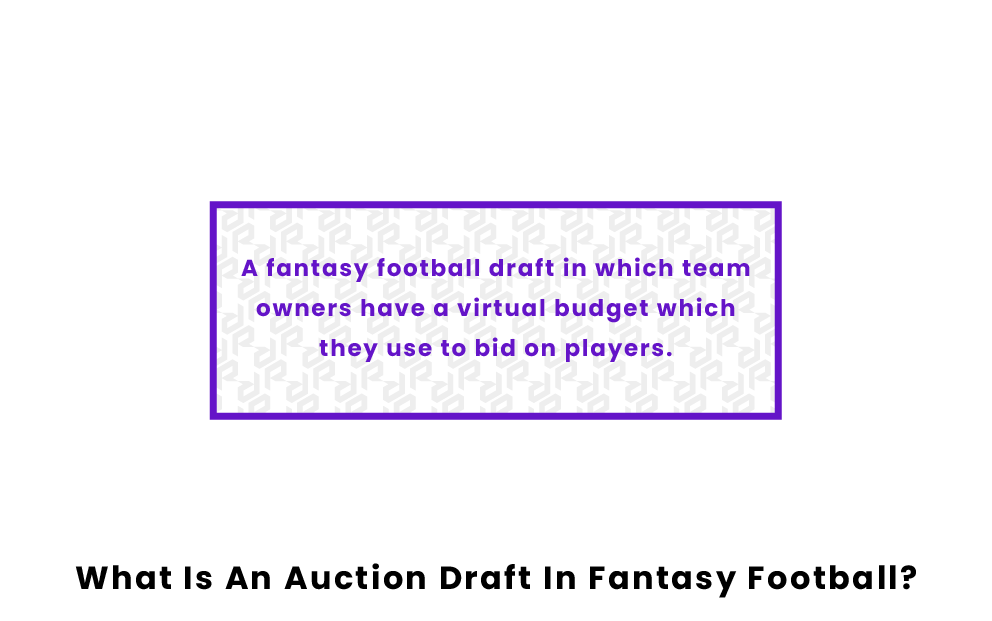 A Fantasy Football Auction Draft is a draft in which team owners have a virtual budget which they use to bid on players. The method of obtaining players is the only notable difference between auction drafts and standard snake drafts. While in snake drafts teams take turns choosing from any available player, in auction drafts, each team has the chance to take any player by bidding some of their virtual budget. Teams take turns nominating a player to be bid on, and the whole league can continue bidding on the nominated player until no one wants to increase the bid anymore, at which point the team with the highest bid gets the player on his team.

Teams take turns nominating players to be bid on during the draft. Normally, a team will have 30 seconds to nominate a player. Once they have nominated someone, bidding opens up to the whole league, including the person who nominated the player. Nomination bids automatically start at $1, although nominators can choose to open the bid higher. Standard budgets in auction drafts are $200 per league member to spend on 16 players. The auction continues until each team has drafted 16 players. Teams do not have to spend all of their $200 budget, although normally there is no incentive to have any budget left over after the draft has completed.

There is generally a maximum bid, calculated by subtracting a team's empty roster spots from the team's remaining budget. For example, at the start, no team can bid more than $184 on one player. This is because teams are unable to draft players for $0, so a remaining budget of $14 or less with 15 empty roster spots would result in a team being unable to fill their roster.

After the draft, each team will begin with a budget for free agency, normally $100. This free agency budget is not affected by the draft budget one way or another, although it is used to keep the league consistent with having a budget to manage their roster throughout the season. This budget can be used or not to acquire free agents during the year, usually through an anonymous bidding process each week, where team owners will not know if other teams are bidding on the player they want or how much they are bidding. Similar to the draft budget, this free agency budget does not have to be used in its entirety, although there is generally no incentive to finish the season with any budget remaining.

How do I do an auction draft in fantasy football?

Not every Fantasy Football platform supports auction drafts. ESPN Fantasy is the most commonly used Fantasy Football platform, including for auction drafts. Other viable platforms include NFL Fantasy, Yahoo Fantasy, and CBS Fantasy, among others. The commissioner of your league just has to set your draft to auction in the league settings, and then your league will be good to go for the draft. From there, once your draft starts, you nominate players when it's your turn, and bid on the players you want.

What is the best strategy for a fantasy football auction draft?

There are a multitude of strategies in Fantasy Football drafts, each depending on league size, league format, and personal preferences. In auction drafts, it is important not to overspend on one or two players. The top tier running backs often go for around $70 out of the standard $200 budget, leaving team owners with only $130 to fill out 15 more roster spots. While it is always nice to have one of those top tier players, you don't want to spend that much money on a few guys and be left with little budget to spend on the rest of your roster.

It is also imperative to prepare before your draft and know how much you are willing to spend on certain players and who you want to target, as well as to know your leaguemates and how they like to draft. That way, you can strategize and know which players you'll be able to drive the price up on, and which players you can get for good value.

Pages Related To What Is An Auction Draft In Fantasy Football?