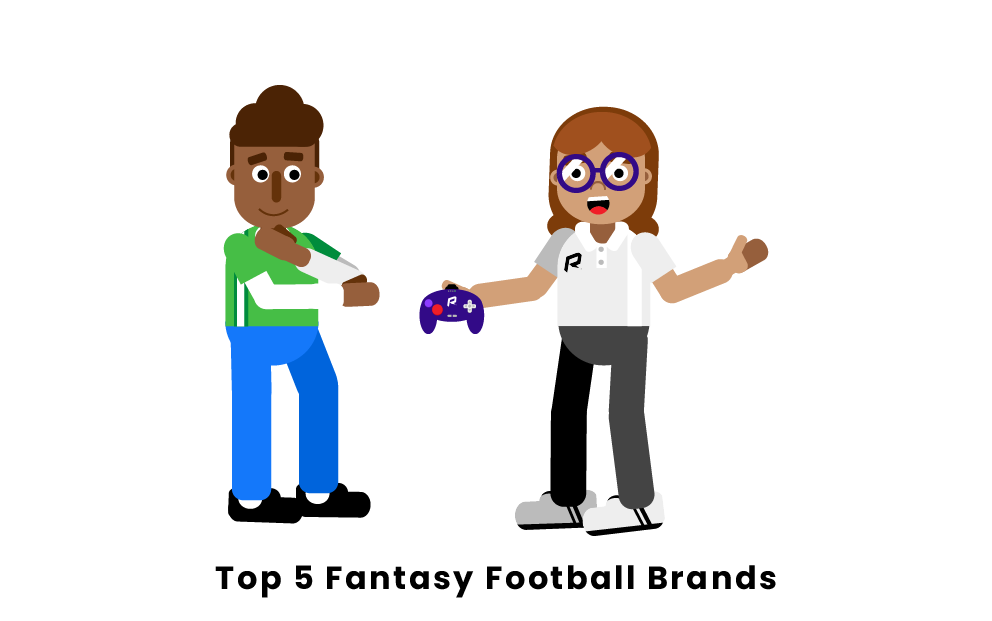 Yahoo! Fantasy is the most popular fantasy website, followed by ESPN.com and NFL.com. The aspect that sets these websites apart from the competition is their easy-to-read overlay. Yahoo! Fantasy is very popular because it is easy to jump in and play. ESPN.com and NFL.com are a little harder to read and require some more experience, but their in-depth player analysis and weekly fantasy analysis make them very popular.

Once a league is started on each website, it will archive the past year’s data, which makes people less likely to switch.

There are some fantasy football websites that are popular because of the ability to make money while playing. The websites listed above are focused on season-long fantasy leagues, but listed below are websites that prioritize daily fantasy contests.

DraftKings and FanDuel have come under scrutiny as to whether they are considered gambling or not and are therefore not always legal in every state.

What are the most popular fantasy football websites?

Yahoo! Fantasy is still the most popular fantasy website today. It's very accessible to new players, with in-depth tutorials for every section of the web page. It's very easy to get started on Yahoo! Fantasy and get connected with others who want to play just as much as you do. Yahoo! Fantasy also has a very simple overlay that is easy to read. Drafting, the trade block, and even the waiver wire are very easy to find and maneuver with the simple user interface.

ESPN is famously known as the “Worldwide Leader in Sports” and has also earned its status as one of the top websites for fantasy football. Its platform also allows users to customize their league and experience but is not as simple to operate as Yahoo’s site. However, ESPN brings another level of analytics to its fans by hosting podcasts, in-app analysis, and even a sports show centered solely on fantasy football.

ESPN allows for more engagement among its fans as well as a more lively league message board and customized weekly rankings that always include some lively trash talk.

ESPN.com Fantasy is less popular due to being less accessible to new players. It's made more for experienced players of fantasy football. As a result, the website can sometimes be hard to navigate if you don't know what you're looking for. The upside of this is that everything on ESPN.com Fantasy is very customizable. There are a multitude of different league types and custom settings that can be set, including features that you won’t find on any other website. Another plus to ESPN.com Fantasy is how in-depth their analysis shows and statistics pages are. Since the website is made for sports fans, the number of statistics on the website is endless. It's possible to go back years at a time to find stats on a player who is no longer in the NFL.

The NFL has been able to capitalize on the popularity of fantasy football and is one of the biggest websites within the industry. NFL.com is the official fantasy football site of the NFL and mandates that all stadiums display fantasy stats for spectators. NFL.com is also a free platform that allows users to customize their league. Their app and website are very user-friendly and easy to navigate as well.

The NFL will continue to promote its own platform and, because of this, will always have a dominant spot in fantasy football.

CBS Sports is another top brand within the community of fantasy football. However, CBS sports is designed for more intensive fans because it allows for extra customization and control, which comes with a price. It costs $180 to host and manage your own league on CBS’s platform for a season, including membership for up to 30 members. They also offer free leagues that are great for beginners, but keep in mind that these leagues won’t allow you to customize settings. Given that CBS broadcasts many NFL games on their networks each year, the company has the opportunity to promote their fantasy platform as much as possible.

CBS sports is a great brand for hardcore fantasy football fans who want a customizable and extensive experience.

FanDuel offers a fantasy experience unlike any other website on this list. It offers weekly fantasy leagues that do not share the same commitment as a full season. FanDuel players can choose between free and cash prize leagues, depending on their preference. The process of signing up is extremely easy.

FanDuel is for both veteran and new fantasy players as there are no long commitments. It is one of the most established sports gambling companies in the United States. FanDuel will continue to grow in popularity as the legalization of online gambling increases in the future years.

DraftKings has obtained tremendous credibility through its years of daily fantasy operations and its more recently growing sportsbook, available in a number of states throughout the US. This notoriety within the fantasy and sports betting community makes DraftKings a great option for anyone looking to get into fantasy football, so long as they’re open to the short-term format they have to offer.

My Fantasy League is a highly-customizable and in-depth fantasy football website. While not as easily navigable as some fantasy websites, it makes up for that with several distinct features like draft tools and fantasy rankings. While they have a free draft-only league option, most league options come at a price. They offer different levels of fantasy leagues, with the lowest-priced available for $79.95.

One feature that sets My Fantasy League apart from other paid websites is the fact that they offer a free trial of their site with no credit card required. League members can enjoy a no-commitment experience from the preseason up until week 4 of the NFL regular season. If you like the service, you can pay to continue playing for the rest of the season!

Sleeper is a relatively new fantasy football platform, but that certainly doesn’t diminish just how great of a platform they provide. Most notably, Sleeper prides itself on providing premier research tools and data for its users to make highly educated decisions and set the best lineups possible. Additionally, they also offer a unique messaging system within their platform that allows league members to communicate without having to turn to emails, text messages, or third-party apps.

The platform also prides itself in providing an ad-free experience and a wide range of scoring customization options. All in all, while it may not have the same notoriety as some of the aforementioned platforms, Sleeper is a great option for anyone looking to form a fantasy football league.

What is the best daily fantasy football app?

The best daily fantasy football app is FanDuel. This site allows you to compete with a closed group or players worldwide. You can compete in free-to-play games or enter paid competitions for cash prizes. FanDuel Daily Fantasy is available in 44 states in the US, making it one of the most accessible ways to play fantasy football for prize money.