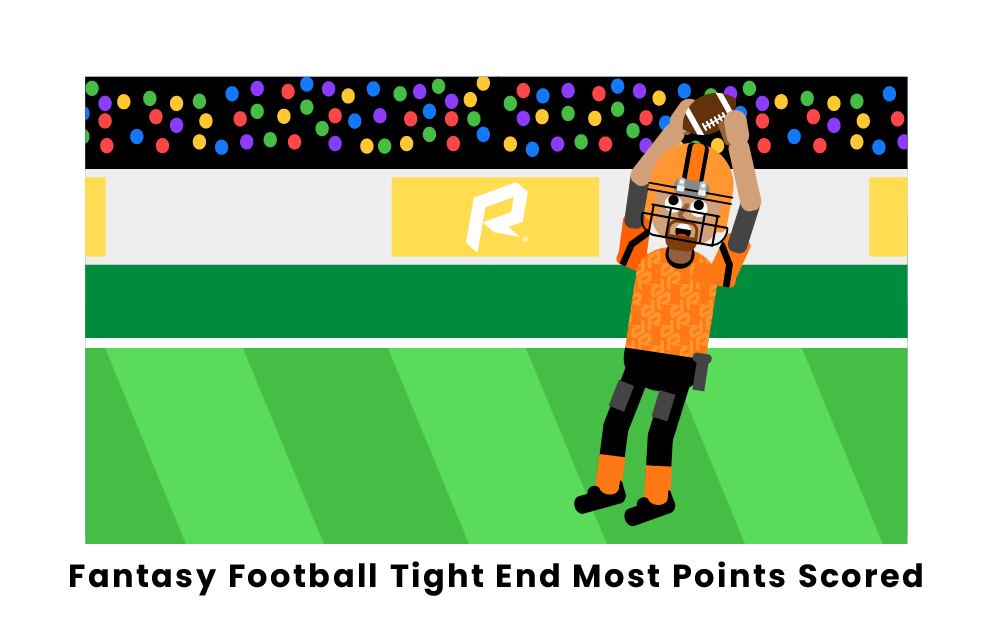 Here is a list of the top tight end fantasy football performances both in a single game and over a season. Basic PPR fantasy scoring settings are used.

The basic scoring setting for fantasy tight ends include the following:

One thing most tight ends on this list have in common is a strong quarterback– Drew Brees, Patrick Mahomes, and Tom Brady all receive multiple mentions on this list.

What Tight Ends Have Scored The Most Fantasy Points In A Single NFL Game?

Darren Waller had the best ever single-game fantasy performance by a tight end on December 6th, 2020. Waller was targeted 17 times by quarterback Derek Carr, catching 13 of the passes for 200 receiving yards and two touchdowns.

This performance goes down as the sixth-most receiving yards by a tight end in a single game. The only tight ends with more yards in a game are Shannon Sharpe (214), Jackie Smith (212), George Kittle (210), Rich Caster (204), and Pete Retzlaff (204).

Antonio Gates’s big game came against the Kansas City Chiefs all the way back in 2005. Gates managed three receiving touchdowns from 16 targets, as well as 10 receptions and 145 receiving yards. Gates was playing for the San Diego Chargers, and his quarterback was 26-year-old Drew Brees.

Of Gates’ three touchdowns, the last was certainly the biggest. This 35-yard touchdown reception stood as the game-winner in a 35-28 victory for the Chargers.

Rob “Gronk” Gronkowski earns the number-three spot on this list thanks to his 2014 performance against the Chicago Bears. He managed nearly 42 fantasy points in a 149-yard three-touchdown game.

Gronkowski was only targeted nine times in this game on October 26th, 2014. However, that was all the tight end needed: he caught all nine passes for an average of 16.6 yards per completion.

Mark Andrews’ October 11th performance in 2021 earned him this spot on this list. The Ravens were playing the Indianapolis Colts, who they defeated 31-25 in overtime. This win elevated the Ravens to 4-1 on the season, sinking the Colts to a 1-4 record.

Andrews caught 11 receptions for 147 yards and two touchdowns. Both of his touchdowns came in the fourth quarter, as the Ravens raced to catch up. Andrews scored with nine and a half minutes left and then again with just 39 seconds left. The Ravens would eventually win in overtime, thanks to Andrews’ effort to get them there.

Travis Kelce’s 41.1-point game on December 16th, 2021, earns him the final spot on this list of top tight end performances. The Chiefs’ tight end caught 10 passes for 191 yards and two touchdowns– including the overtime winner.

In overtime, the Chiefs found themselves on the Chargers’ 34-yard line. Mahomes passed the ball four yards to Kelce, who caught it at the 30 before juking out multiple Chargers defenders en route to the endzone. This touchdown is arguably the biggest in Kelce’s career, and it topped off Kelce’s biggest fantasy performance ever.

What Tight Ends Have Scored The Most Fantasy Points In A Season?

Rob Gronkowski’s 2011 season stands as the strongest ever fantasy year by a tight end. Gronkowski managed 330.9 points thanks to 90 receptions, 1,327 yards, and 18 touchdowns.

The 2011 Patriots had a fantastic year, earning a 13-3 record in the regular season. They advanced all the way to the Super Bowl, where they were defeated 21-17 by the New York Giants.

Jimmy Graham is one of just two tight ends to crack 300 points in a fantasy season. Graham’s top season was 2013 with the New Orleans Saints. Graham’s points came from 86 receptions, 1,215 yards, and 16 touchdowns.

Much like Gronkowski in his 2011 season, Graham had a fantastic quarterback to pass him the ball: Drew Brees.

Kansas City had a record-breaking offensive season in 2018, and Travis Kelce was a huge part of that. No Chiefs player had more receptions than Kelce in 2018, who hauled in 103 passes. Tyreek Hill and Travis Kelce made up for the bulk of the Chiefs’ air gains, combining for 55% of the team’s receiving yards (29% Hill, 26% Kelce). Kelce, 1336 yards, also scored 10 touchdowns.

Jimmy Graham takes up yet another spot on this list, this time for his 2011 season. Graham scored 296 fantasy points from 99 receptions for 1,310 receiving yards and 11 touchdowns.

Just like Gates’ 2005 season, and Graham’s own 2013 season, Graham was catching passes from Drew Brees in 2011. The 2011 Saints went 13-3 in the regular season before losing to the 49ers in the Divisional Round of the playoffs.

Zach Ertz set the record for receptions by a tight end in a single season in 2018, with 116 receptions. He scored 280.3 fantasy points, 116 of which came solely from his receptions: tight ends get one point for every reception in PPR fantasy football leagues. Ertz also tacked on 1,163 yards and eight touchdowns– easily the fewest touchdowns on this list.

Ertz’s 2018 Eagles would eventually be defeated by the New Orleans Saints, 20-14, in the NFC Divisional Round.

Which tight end has scored the most fantasy points in total?

Of all tight ends, Tony Gonzalez has the most ever fantasy football points. Gonzalez racked up 2189.7 fantasy points in his 270-game career, which spanned from 1997 to 2013. Gonzalez played for the Chiefs from 1997 to 2008 and the Falcons from 2009 to 2013. Surprisingly, Gonzalez only reached the 10 touchdown mark three times in his career: 1999, 2003, and 2008. He wasn’t a particularly explosive player, which is why he doesn’t make it on either of the lists above, but he was extremely consistent.

Who Is The Best Tight End To Draft In Fantasy Football?

In general, the best tight ends to draft in fantasy football get a large percentage of their team’s targets. It’s also important for a tight end to be playing with a high-powered quarterback, as we saw in our lists above. Right now, the best tight end to draft is Travis Kelce. Kelce, a veteran tight end for the Kansas City Chiefs, is a force in Kansas City’s offense. Moreover, Kansas City recently traded away their top wide receiver: Tyreek Hill. This forces quarterback Patrick Mahomes to rely even more heavily on Kelce, who has already put up impressive numbers for years.