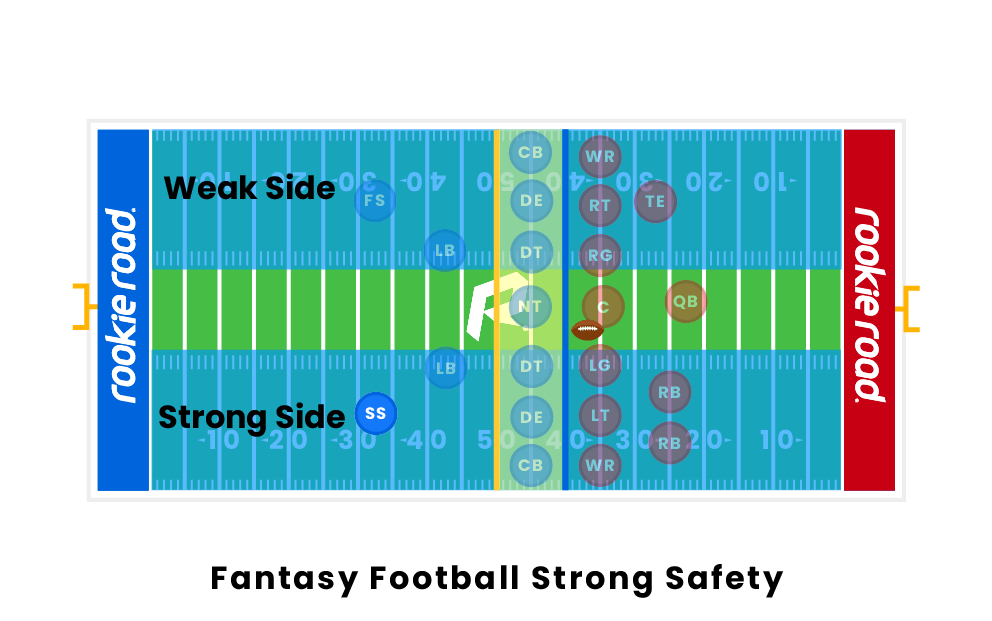 What is SS in Football?

What is SS in Fantasy Football?

Some IDP leagues only feature three or four defensive slots and do not specify which player positions must be used. Other “deep IDP” leagues specify defensive roster slots by position, with some even using more defensive players than offensive players.

A strong safety's ability to both tackle and play in the secondary makes them highly valued in IDP leagues. In comparison to other positions, the strong safety is more valuable than all positions but linebackers, and the best strong safeties are actually sometimes better than some linebackers. That is because of how much tackles are weighted: players who make a lot of tackles are worth quite a bit. We will discuss this further below.

Due to their versatility, strong safeties earn their points in fantasy in several different forms. Most often, they earn points by executing tackles, forcing sacks on the offensive quarterback, and securing turnovers such as interceptions and fumbles. Below is a chart that shows some actions and their assigned point values:

How to Draft a Strong Safety in Fantasy Football

Other than the first few picks of the first round, there is no place in the fantasy draft that would be too high to select a strong safety. Drafting a quality SS is worth it, even as a first-round draft pick in IDP leagues. Focus on making sure you have a steady player to fill your SS spot, even if it means using an early pick. There is not too steep of a drop-off in terms of fantasy production from the stars to the average strong safeties, but it is still recommended to get a good one early. Again, tackles are the most valuable because of how common they are for a good tackler. They make up the majority of the position’s total points. However, interceptions and sacks are also major ways that strong safeties help their fantasy owners out.

What is a strong safety (SS) in fantasy football?

A strong safety (SS) in fantasy football is one of the players you can slot into a DB position in deep IDP leagues. Strong safeties can be utilized in any slot in IDP leagues that do not specify defensive player positions and instead use general IDP slots. Because of their ability to block and tackle, strong safeties are some of the most valuable defensive players you can draft in IDP fantasy football, along with linebackers.

What is the SS position in football?

In football, SS refers to the position of “strong safety,” a defensive back stationed on the strong side of the field, behind the linebackers, and beside the free safety. Strong safeties are charged with guarding against deep throws and long running plays and are often the last line of defense against the offense. Strong safeties are placed on the “strong side,” which is referred to as such because the offensive tight end lines up on that side, making it so that there is an extra lineman on that side.

How do you pick the best fantasy safety?

You pick the best fantasy safety by assessing draft tier and average past or projected fantasy points. Safeties in the higher tiers (1 or 2) are the best performers. Some sites use sub-tiers such as 1A, 1B, with A being the highest sub-tier. Average fantasy points give a picture of how many points you can expect from your safety each week. It is up to you whether to use past or projected points; neither will be a perfect prediction.