Should You Have Multiple Starting Players From The Same Team In Fantasy Football? 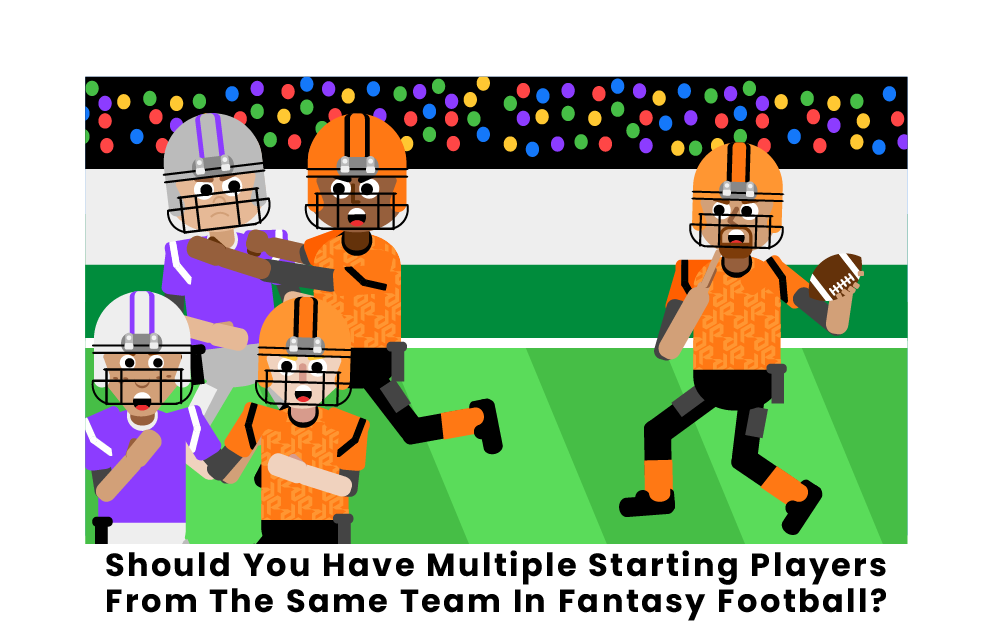 Fantasy football is all about scoring the most possible points, and some strategies can be riskier than others. One of these strategies is known as “stacking” which involves having multiple players from the same team on one’s fantasy team. This article will outline the various pros and cons of stacking.

What is “Stacking” in Fantasy Football

In fantasy football, stacking is the practice of having a quarterback and wide receiver (or sometimes a running back or tight end), who play on the same team in the NFL on your roster. Having both the quarterback and one of their receiving targets can often yield extra points for your fantasy team. For example, if your quarterback throws a touchdown to a wide receiver on your fantasy team, you receive points from two touchdowns, plus the yardage and potentially any PPR (points per reception), if you play in a PPR league.

The benefits of stacking can be many. Quarterbacks develop chemistry with their group of receivers, but that chemistry will always be better with certain receivers over others. Having both a quarterback and their favorite target often means a ton of fantasy points will come your way.

Most of the time, this stacking technique is done with wide receivers, since they often receive the highest percentage of passes thrown in their direction. Regardless, the technique can also be used with tight ends and running backs. Some quarterbacks prefer to throw to tight ends close to the end zone, which can mean extra points from touchdowns. Additionally, if used correctly, running backs can provide a unique opportunity for stacking. Teams will often have a running back that specializes in pass-catching, so pairing a player like that with a team’s quarterback can provide a lot of points, especially in PPR leagues.

However, even running backs that don’t specialize in pass-catching can excel in stacking usage. Sometimes, teams with very good quarterbacks will jump out to such a large lead in the game that they no longer want to pass the ball, and simply want to run out the clock to get the game over with. Most teams do this by giving the ball to their running back repeatedly. Stacking a quarterback and a running back can also guarantee that you’ll receive points regardless of the tempo and play style that an offense is using.

When done right, stacking is a tactic that helps people win their fantasy leagues, but it doesn’t always work like that. Sometimes, when you’re drafting a fantasy team, you might think that you know which wide receiver is going to be a quarterback’s favorite, but then it might turn out completely different over the course of the season. Since stacking requires a very specific drafting strategy, this means you could’ve completely wasted a draft pick or two.

Perhaps the biggest drawback of stacking, however, is bye-weeks. Each team in the NFL has a bye-week when they don’t play a game, which means that if you stack two players from one team, you will be left without two of your best players on that week. If that week is the difference between making your league’s playoffs or not, you might be out of luck. This becomes even more severe when you have more than two players from the same offense on your fantasy squad. And in addition to bye-weeks, sometimes offenses just have poor games. If you’re relying on multiple players from an offense to score you fantasy points, and they have a bad week, you’re simply out of luck. Stacking can be rewarding, but one must consider the risks.

Pages Related to Should You Have Multiple Starting Players From The Same Team In Fantasy Football?