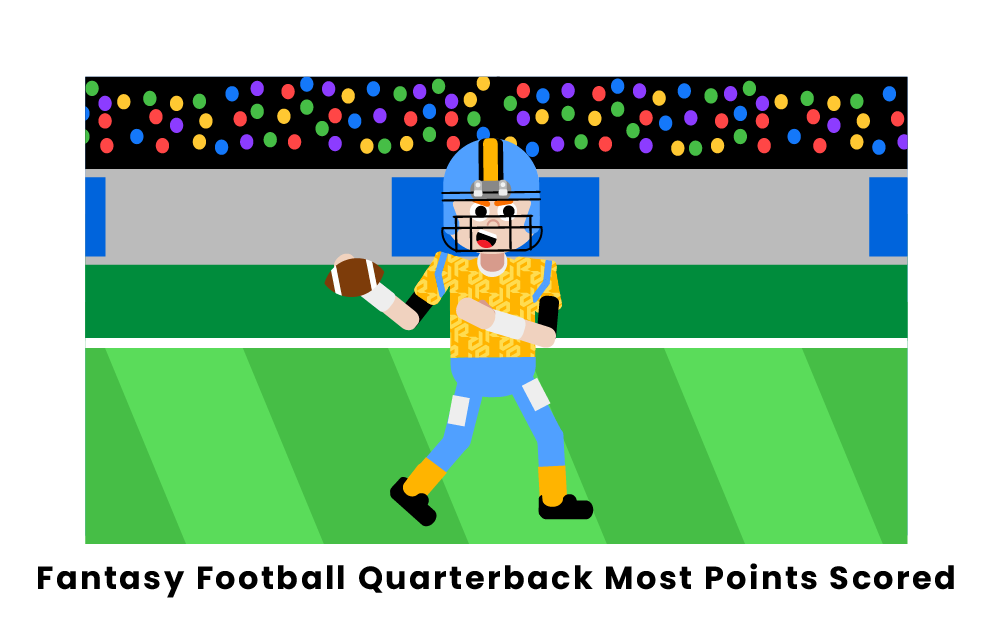 Quarterback is the highest-scoring position in fantasy football. Even the mid-tier quarterbacks average more points than most high-end players at other positions. In this piece, we will examine the top fantasy performances by quarterbacks on both a single-game and single-season level.

The standard scoring for fantasy quarterbacks, which will be used for these totals, is as follows:

What Quarterbacks Have Scored The Most Fantasy Points In A Single NFL Game?

The most fantasy points ever scored by a quarterback in one game is 49.32 by Michael Vick, on November 15th, 2010., Vick led his Eagles to a 59-28 win over the Washington Redskins in a memorable Monday Night Football game.

Vick only completed 20 passes in this historic performance, but he managed 333 yards and four passing touchdowns. He also ran for 80 yards and two touchdowns.

Since this was a Monday night game and fantasy matchups run from Thursday to Monday, Vick likely altered the outcome of many fantasy owners’ matchups at the last second.

All the way back in 1991, Mark Rypien delivered a legendary performance that stood as the number one fantasy performance for almost 20 years. Rypien completed 16 of his 31 passes for an astonishing 442 yards and six touchdowns. Rypien also added a four-yard rushing touchdown.

One funky aspect of Rypien’s performance was the combination of very few passing attempts and a huge chunk of passing yards. Despite completing just 16 passes, Rypien managed 442 yards. That comes out to 27.63 yards per completion!

On Thursday, September 5th, 2013, Peyton Manning and the Broncos faced the defending Super Bowl champion Baltimore Ravens in the opening game of the 2013 season. This was a chance for revenge, as the Ravens had upset the Broncos in Denver last postseason on the way to their championship title.

Peyton Manning broke the previous record of six passing touchdowns in one game by throwing seven. The Broncos won 49-27, and Manning threw for 462 passing yards.

No list of great NFL quarterbacks would be complete without Aaron Rodgers, and this list is no different. In October of 2011, Rodgers put up impressive numbers against the Denver Broncos. The Packers dismantled the Broncos, winning 49-23. Rodgers passed for 408 yards and four touchdowns and added 36 rushing yards and two rushing touchdowns.

Rodgers has always been a pocket quarterback, meaning he prefers to pass instead of scrambling. Thus, it is surprising that his most productive game happened largely thanks to efficient rushing by Rodgers.

Surprisingly, Nick Foles is the final quarterback on this list. He may not have had as successful a career as Rodgers or Manning, but he can always remember this legendary performance. In this 2013 game between the Eagles and Raiders, Foles completed 22 of his 28 passes for 406 yards and seven touchdowns, tying the NFL record!

Foles could have set the record for passing touchdowns in a game if he was given a chance. Instead, backup QB Matt Barkley replaced Foles in the 4th quarter of this blowout contest.

Foles joined Peyton Manning and Drew Brees as the third-ever quarterback to throw for seven touchdowns in a single game.

Which Quarterback Has Scored The Most Fantasy Points In A Game?

Michael Vick holds the record for most fantasy points scored in a single game with 49.32. In a 2010 performance, Vick scored 49.32 points thanks to 333 passing yards and six total touchdowns: four passing and two rushing. His Eagles scored 59 points in this Monday night matchup, pummeling the Washington defense.

Which Quarterback Has Scored The Most Fantasy Points In A Season?

Patrick Mahomes’ 2018 season stands as the highest scoring fantasy football season ever by a quarterback, racking up 443.96 points for an average of 27.75 per game. Mahomes will likely be outdone soon, as the NFL recently expanded the schedule from 16 to 17 games. However, thus far, nobody has been able to match Mahomes’ excellence, even with an extra game.

Who Is The Best Quarterback To Draft In Fantasy Football?