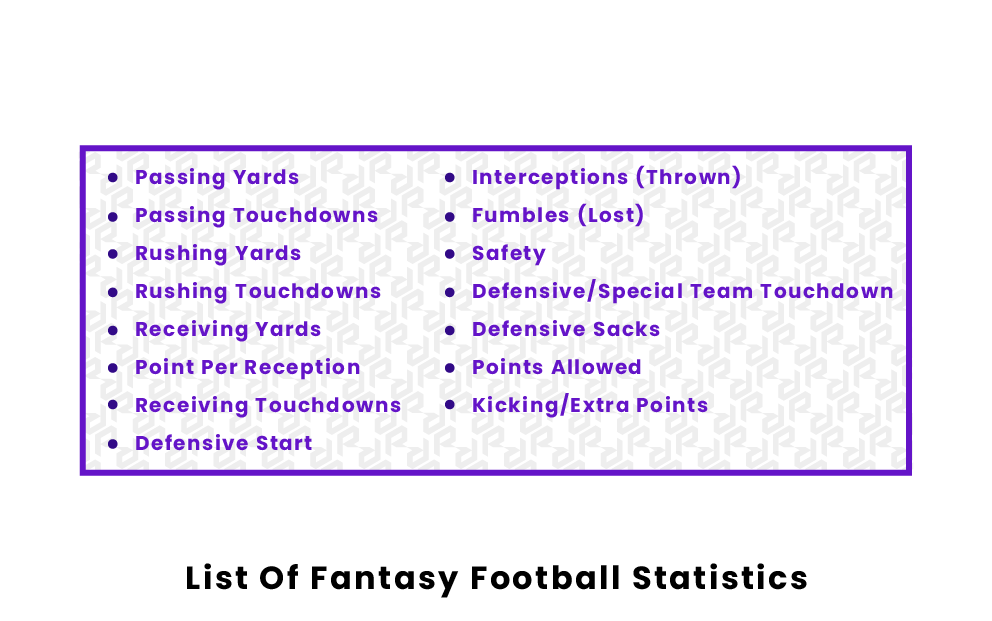 Believe it or not, Fantasy Football was created in 1962, by Bill Winkenbach, a minority stake holder for the Oakland Raiders, but was not introduced online until 1997. Since then, Fantasy Football has erupted between friends, family, and football fanatics and is a huge part of every NFL Sunday.

When a player throws a forward pass down, that constitutes as passing yards. For every 25 passing yards a player is awarded 1 fantasy point. Some leagues institute a bonus for achieving over 300, 400, and 500 yards, however that depends on the league commissioner. The most passing yards achieved in an NFL game was 554, by Norm Van Brocklin which would be awarded with 22 fantasy points.

A passing touchdown is when a player throws a forward pass to a player that results in a touchdown. A passing score is worth 4 fantasy points. The most touchdowns thrown by a player has been 7, with quarterbacks such as Peyton Manning, Drew Brees, and Nick Foles being tied for the record which resulted in 28 fantasy points.

Rushing yards occur with a handoff or backwards lateral is performed. For every 10 rushing yards, it results in 1 fantasy point. Much like passing yards, depending on the league, you can receive point bonuses for ecsliping 100 or 200 yards. The most rushing yards by a single player in one game is Adrian Peterson, who totaled 296 yards which resulted in 29 fantasy points.

A rushing touchdown is where a handoff or a backwards lateral results in a player crossing the goal line. Rushing touchdowns are great because either a quarterback, running back, or wide receiver has opportunities to get one. This play is awarded with 6 points. The most rushing touchdowns in a game was five, which is held by multiple players such as Jim Brown and Clinton Portis which resulted in 30 fantasy points.

Receiving yards are yards gained after a forward pass. Wide receivers are extremely valuable in fantasy football, given the way the league has valued passing over the last decade. For every ten receiving yards a player is awarded one point. Once again, depending on the league players can be awarded with bonuses for achieving 100, 200, and 300 yards. The most receiving yards in a game is 336, held by Flipper Anderson, which resulted in 33 fantasy points.

The PPR rule is a somewhat new phenomenon in fantasy football. In a PPR league, every reception from a player is one point. This is a huge boost for some pass catching players. The most receptions in a single game is held by Brandon Marshall with 21, which resulted in 21 fantasy points.

No matter what, any defense/special teams unit starts the game with 10 fantasy points. There are plenty of ways for a defense to earn fantasy points such as fumble recoveries, interceptions, defensive touchdowns, and sacks. The Cleveland Browns and Pittsburgh Steelers are credited with the highest amount of fantasy points scored by a defense, with a whopping 52 fantasy points.

If a player throws an interception, which is when the defense intercepts the ball from the offense, it results in -2 fantasy points. This could be a real factor in close games with your opponents. The most interceptions thrown by a player was 8, by Jim Hardy, which resulted in -16 fantasy points.

A lost fumble is where an offensive player loses control of the ball, and the defense recovers the ball. Fumbles are a nuisance in fantasy football, especially to running backs and results in -2 fantasy points. The most fumbles in an NFL game is by Brett Favre with 6, which resulted in -12 fantasy points.

A safety is when the defense tackles their opponent in their own endzone. This is a crucial two point increase for a defense, yet is one of the rarest plays. The most safeties in a game was by the Greenbay Packers with 2 safeties, resulting in 4 fantasy points.

A sack is when a defensive player tackles the quarterback on a passing play behind the line of scrimmage. A defensive sack is a huge swing of momentum in a game, and is awarded with 1 point per sack. The most sacks in one game was the Philadelphia Eagles with 14, resulting in 14 fantasy points.