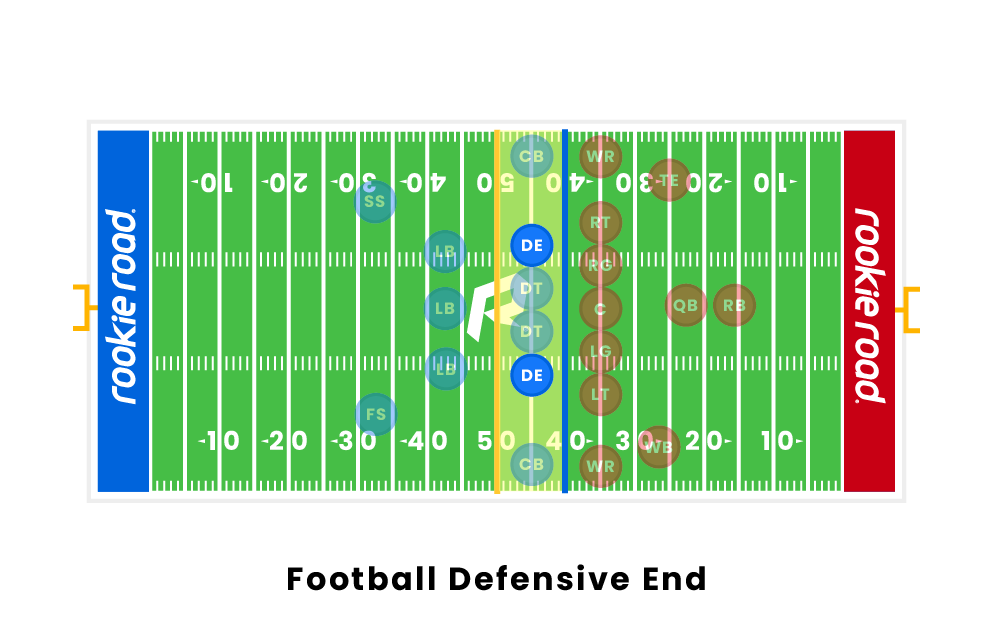 What is DE in Fantasy Football?

A defensive end is a player who plays on the line of scrimmage defensively on either end of the line. This includes the right end and left end. Their primary job is to rush the quarterback as well as contain the running back by keeping them from going outside.

Compared to other defensive positions, the defensive end is right in the middle in terms of fantasy value. It is higher up than defensive tackles and cornerbacks but behind linebackers and safeties.

Given the versatility on the field of some defensive ends, there are a variety of ways for them to potentially earn points. Sacks are the most common way for a defensive end to score, as they are usually the league leaders in that category. With those sacks, forced fumbles are also common as well as tackles for a loss.

Defenders are all scored with the same point system, but below is a chart depicting the most common ways defensive ends score points.

With defensive ends, the biggest thing to note is that four tackles are equal to a sack. The problem with this is that tackles are far more common than sacks, making them the most beneficial stat to a defender in fantasy. If you’re playing in an individual defensive player league (IDP), those with more tackles are better choices.

How to Draft a Defensive End

In most cases, using an early round pick on a defensive end is not worth it. Their sack numbers are impressive, but tackles are far too valuable in an IDP league. An early pick is better spent on a linebacker or safety. If you are set on taking one, draft the ends with the highest tackle numbers in previous years.

With defensive ends, it is best to focus on high upside guys in later rounds. Outside of the obvious top defensive ends like TJ Watt, Joey Bosa, and Danielle Hunter, you should focus on trying to take rookies or up-and-coming players.

What is a defensive end in fantasy football?

What is a DL in fantasy football?

No, defensive ends are not typically high scorers in fantasy football. This is because they get most of their points through sacks, which do not occur too often. However, some defensive ends tackle more than their typical counterparts and are particularly valuable in an individual defensive player (IDP) league.