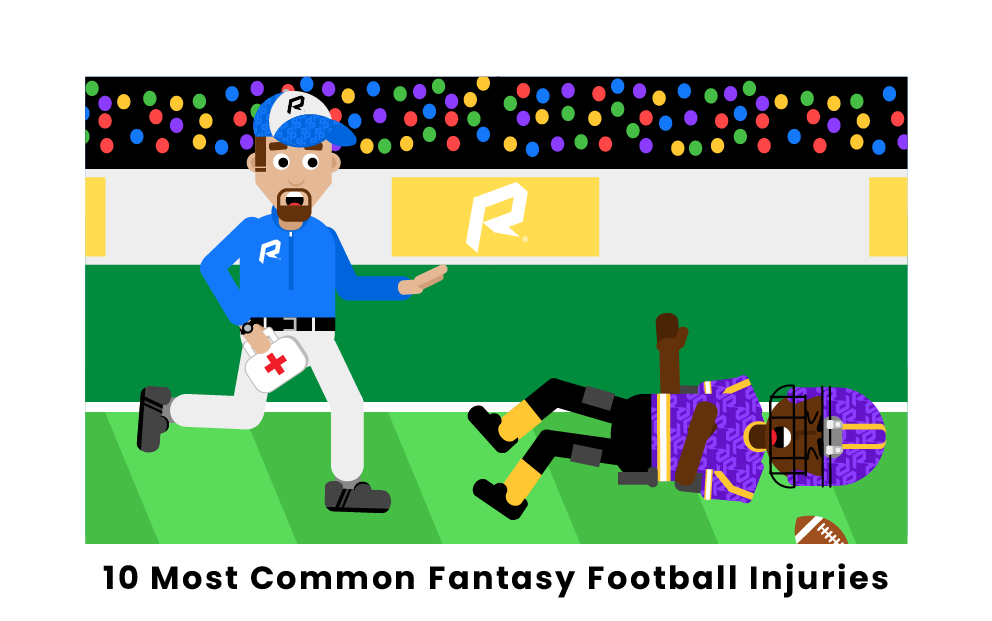 What are the most common fantasy football injuries?

In the game of football, concussions are one of the more common injuries that take place throughout a game. Concussions can happen due to blows to the head and neck area. Considering tackle football is a very physical sport played at a very fast pace, many times players will collide with their helmets, injuring both players. Most football players will take anywhere between 900-1500 blows to the head every season, and concussions to fantasy players is one of the more common injuries. The severity of the concussion determines the amount of time the player will miss, as does previous concussion history.

In football, most of the game relies on being able to make quick cuts in the turf and making sure you can change direction quickly. This puts a lot of stress on a players knees, and specific parts of the knee can be affected by different movements. A torn meniscus is very common, and is not one of the more devastating knee injuries. Although your lateral movement may be hindered by a torn meniscus, the player's knee is still intact, and this is usually not a season ending injury for most fantasy players, although depending on whether or not the player opts for surgery, it could be around 4-6 weeks for a return.

The medial collateral ligament (MCL) is located along the outside of the knee. This ligament is very commonly used by receivers and running backs for cuts and quick changes of movement, and can be torn quite frequently. Although the MCL is not the worst ligament you can tear in the knee, it will land you injured for a significant period of time. Some fantasy players are able to come back from an MCL depending on the date of the injury and significance and grade of the tear, but it can significantly hinder a player's season without a full offseason of recovery and rehabilitation. Some tears can take a few weeks to heal, while others can take a few months.

The anterior cruciate ligament, or ACL, is located at the heart of the knee and is one of the major knee ligaments. The ACL can usually be torn by a weird, unnatural twisting or bending of the knee, and the results are devastating. If a fantasy football player tears their ACL, their season is over. ACL injuries are the most serious of knee injuries, and can sometimes take over a year to heal. Many players will need reconstructive knee surgery after tearing their ACL, and tearing such a crucial knee support ligament could be catasphrophic to an athlete, let alone football players who rely so much on knee strength.

The AC Joint is in the shoulder and can cause tremendous pain to many football players. AC Joint sprains are fairly common, and sometimes players can even tough it out and miss no time, although the pain threshold will be very high. It can be caused by a heavy collision involving the shoulder, or when a player hits the ground shoulder first in an awkward position. An AC Joint sprain gives players a lack of motion and extension in their shoulder, and could be more detrimental to Quarterbacks, Running Backs, and Receivers than any other position. AC Joint injuries tend to linger, however most players are back playing with a brace within 2 to 4 weeks depending on position.

Although ankle sprain injuries are very common in general, they are especially common in football. In such a physical game with so much running and change of direction, players are constantly rolling their ankles throughout the fantasy football season. Although an ankle sprain is not a devastating injury, these kinds of injuries can linger for the whole season and are very painful. There are ways to mitigate the amount of pain an ankle sprain can cause, but this can come with other risks. Some players will miss no time due to an ankle sprain, whilst others could miss a few months. This is the type of injury that is based on severity.

In comparison to the AC Joint Sprain, a dislocated shoulder is substantially more severe. Dislocated shoulders can occur during a collision with an opponent or the ground, and are tough to recover from. For certain positions, take the Quarterback for example, a dislocated shoulder could be season-threatening. For most positions however, it can still take your fantasy player anywhere from half the season, to almost the full season to recover. Players not only need to feel as though they can extend and make football plays, but also protect themselves from future collisions with players and the ground as well. The rate of reinjury is substantially higher as well.

While a hamstring pull is not the most painful or devastating of an injury, it can be absolutely brutal for your fantasy team. Pulling your hamstring is fully based on the severity of the pull, but the biggest issue stems from the fact that this injury can linger throughout an entire season. If you injure your hamstring once in a season, the chances of pulling it again are greatly increased. A player who receives this injury is likely to be benched by their team, as the fear of reinjury is heightened. Many players can pull their hamstrings on long sprints and runs, and the speed and pressure on the legs can cause most pulls in football.

Quadricep injuries can be absolutely devastating for a player due to the fact that it is a rather large muscle group in the legs. Many players work on straightening their quads throughout the offseason, due to the fact that they create so much of the running power of a player's legs. Quads can be bruised, strained, and torn, but any blow to the quads is bound to limit any player. Teams usually want to be careful with quad injuries because they can keep a player out for many weeks if not managed properly. Tearing your quad is the worst case scenario for a player, as they would most likely be out for the season and require major surgery.

Many football players often suffer major injury to the tricep muscle which is located on the back of the upper arm. Injuring your tricep as a football player is brutal, due to the fact that a player may not be able to secure the ball without arm strength from the tricep. If a player tears their tricep, they are most likely to miss the entire season, with the recovery requiring surgery. Although this injury is more common to defensive players, offensive players are constantly having their arms hit and battered by helmets and bodies, which could lead to the risk of having the tricep damaged.