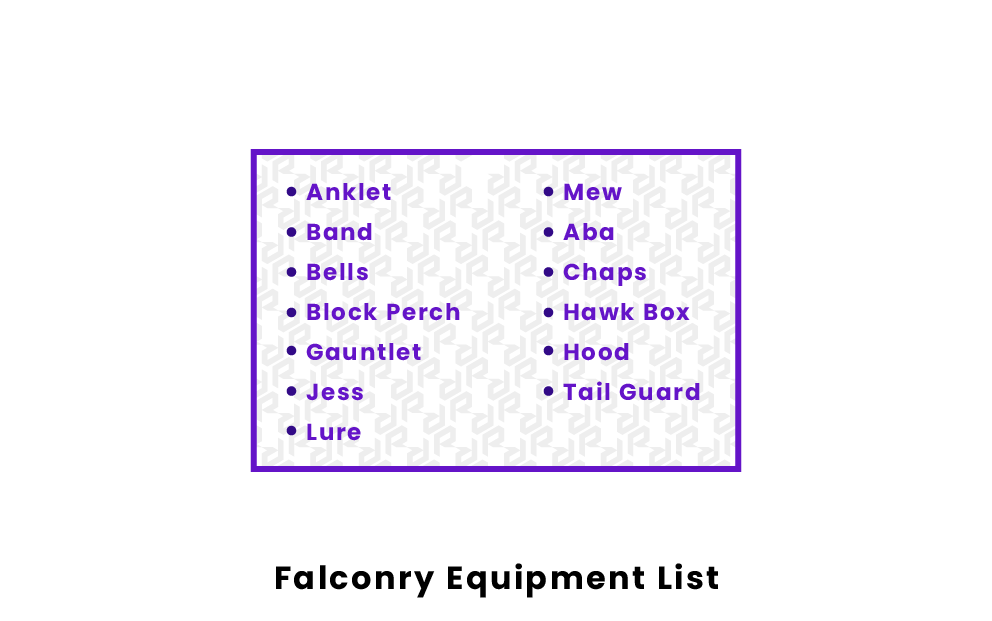 Falconry is a traditional sport that dates back centuries. Using animals to assist us in hunting became commonplace throughout the years, with humans realizing that dogs and birds had a great use to their hunting techniques. Birds are solo hunters, and with their assistance, humans can hunt and track smaller game like squirrels and rabbits more effectively. This list compiles the equipment necessary for practicing this unique sport. 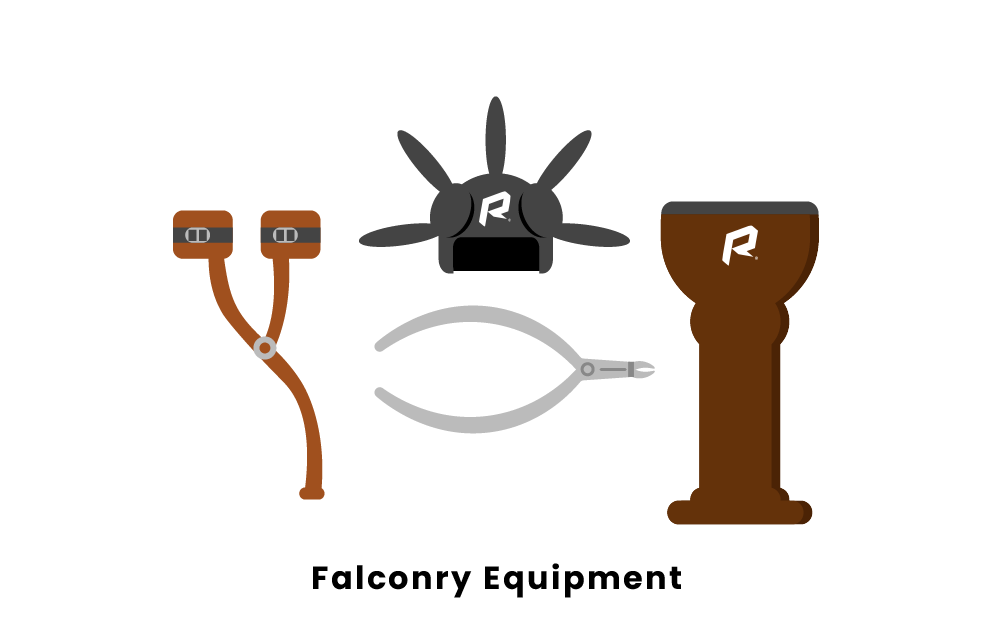 Equipment needed for falconry is highly specialized. The equipment aims to limit the birds flight and aid in the bird’s training for hunting. Specific perches are needed for different kinds of birds, as well as pieces of equipment that keep the bird safe. Some equipment will serve the same purpose, such as letting the bird perch or tethering the bird to the perch, but have different functions or uses. Knowing how to use each piece of equipment is important, and reading and understanding each one’s use is critical to your success.

Certain areas require birds to be banded for identification. Bands will go on the falcon’s ankle and are color coded depending on whether or not the bird is wild caught or bred in captivity. The area in which you live may outline banding laws, whether you have to band birds you have caught or do not have to. Banding your birds for identification is a smart idea, and can be likened to putting a collar on a dog.

Bells are just what they sound like: Small bells that are attached to your bird. As birds are typically quiet, these aid in tracking and the identification of your bird while it is on the ground or on the hunt. As the bird moves, the bells will sound, letting you know where the bird is. Birds of prey are fast enough that the bells sounding does not impede their hunt, and only aids in you being able to get a rough estimate of where your bird is as the falconer.

A block perch is a perch specific for falcons. These perches are away from the body and are carried or mounted in a field or in a location. This perch serves as a place for the bird to rest and allows the bird to be tethered without worry about being sent on the hunt. Animals tend to be able to learn when they are “working” and when they are not. This is seen with police dogs as well, with higher stress and alertness levels when they are on shift as opposed to when they are not.

A gauntlet is a specific type of glove that will allow the bird of prey to be sent out on a hunt. The gauntlet is worn by the falconer, and is the perch in which the falcon will return to once the hunt is completed. Traditionally made of leather, the gauntlet will prevent the falcon’s talons from injuring the falconer. There are other versions of a gauntlet for falconers to choose from, but the gauntlet is the simplest version.

Jesses are a type of tether that attaches to the anklet of the Falcon and to the perch that it is resting on. Jesses can serve several different purposes depending on their length. Shorter Jesses will keep the bird attached to the perch and training jesses will let the bird have little bits of distance away from the perch (oftentimes between 10 and 50 yards). Jesses, also called leashes, are helpful to training and to the use of birds of prey.

As with any hunting animals, they must be trained on what to hunt and how. Lures are false animals that the falcon is supposed to go after. Lures will help train your bird and allow them to learn in a guaranteed manner what and how they are supposed to hunt. Lures in other hunting sports can be used in different ways, whether it be to draw game to a specific area or to help acclimate the hunting animal to its prey. In falconry, lures are used to the latter: acclimation to its prey and teaching hunting techniques.

A mew is where the falcon lives. Similar to a coop for pigeons, the mew will allow the falcon space to fly and to sleep. The mew is the falcon’s base of operations and will allow them to be untethered and have a bit of freedom when they are not being used to hunt. Mews will resemble a bird exhibit at a zoo in order to allow the bird the space it needs to fly and do its own hunting.

Chaps are worn by the bird and are similar to chaps worn by people. Chaps are protective leggings that strap around the bird to prevent injury from the claws and teeth of animals such as squirrels.

The hawk box is not just for hawks, but for all birds of prey being used for hunting. The hawk box is considered a mobile hood, a sensory deprivation container so that the bird of prey does not get overstimulated and riled up before the hunt. Overstimulation is a serious issue with hunting animals, and could lead to the bird or dog injuring itself. The Hawk box will allow the transport of the bird safely.

Hoods are just that, cloth hoods that go over the birds head. The hood is able to be synched down around the bird’s head, and prevent overstimulation. Used when transporting from place to place, and in preparation for a hunt, hoods keep the bird safe and allow it to perform to the best of its ability. The bird will wear its hood before it comes out of the hawk box until it is ready for flight.

Tail feathers of raptors can be extremely brittle. To prevent unnecessary damage, a tail guard can be placed across the tail feathers when the bird is perched or in the mew. For training and for hunting the tail guard is removed to ensure an unhindered flight of the bird.