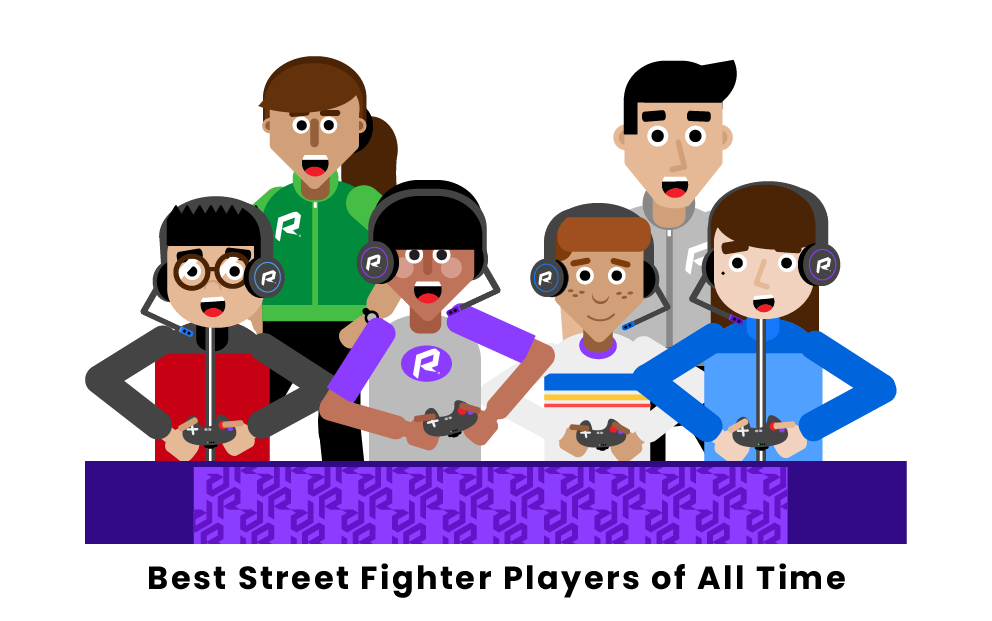 With five core editions, Street Fighter has become one of the most popular international fighting games over the years. The competitive landscape around the game first began with Street Fighter 2 and really took off after a viral video, known as Evo Moment #37, was released from a famous match between Justin Wong and Daigo Umehara at EVO 2004. From there, the Street Fighter esports realm has flourished, and some of the most talented competitors in the world have emerged. Here are the top six best street fighters players of all time.

Who are the best Street Fighter players of all time?

Daigo Umehara is considered to be the best and most decorated Street Fighter player of all time. Daigo began playing fighting games at a young age; at only 17 years old, he won Capcom’s official Street Fighter Zero 3 national tournament in Japan and advanced to defeat Alex Valle in the international Grand Championship in San Francisco. Within the next few years, he appeared in an autobiography titled VERSUS, competed in a notorious exhibition between the U.S and Japan which was filmed for the documentary Bang the Machine, and won the first Super Battle Opera in the Super Street Fighter II Turbo tournament. Daigo’s success and fame did not end here, as he continued to rack up first-place finishes in numerous competitions and tournaments, solidifying him as the best of all time.

Tokido is another one of the best Street Fighter players of all time. He took home his first EVO Championship victory at only 17 years old and never looked back. Tokido quickly became known for his expertise in playing as Akuma in both Street Fighter IV and V. During his time playing Street Fighter IV, Tokido also competed in several other fighting games, preventing him from fully reaching his potential at the game. However, once Street Fighter V was released, he focused solely on that game and dominated, placing high in the Capcom Cup, South East Asia Major (SEAM), and EVO.

Along with Daigo and Tokido, Shinya “Nuki” Onuki is considered one of Japan’s Five Gods of fighting games. He established himself as one of the best Japanese fighters through his success playing Street Fighter III: Third Strike, where he won the EVO three times in 2005, 2007, and 2008 competing as Chun-Li. Nuki also played Street Fighter V, where he did not experience the same level of success but still recorded notable finishes, such as his third-place finish at EGX 2016. While he proved himself as one of the best Street Fighters of all time, Nuki stepped away from competing in 2017 when he failed to renew his contract with CyberZ.

Yusuke “Momochi” is known for his lowkey and quiet playing style, as he rarely conveys excitement when he competes. Although he lacks enthusiasm, Momochi is a silent killer, as he strategically wears down his opponents. He has seen success in playing both Street Fighter IV and Street Fighter V, winning the EVO in 2015 and 2019. Momochi also took home the first-place finish in the 2014 Capcom Cup. He has mastered playing as Ken throughout his career and currently competes for Victrix Pro. In addition to competing, Momochi is also an owner of Shinobism Gaming.

Who is the best Street Fighter player of all time?

Daigo, also nicknamed “The Beast,” is the best Street Fighter player of all time. His earlier years were marked by notable wins including defeating Alex Valle in the 1998 International Street Fighter Alpha 3 tournament and an unforgettable win against Justin Wong while playing Street Fighter III: Third Strike at EVO 2004. From there, he went on to achieve countless first place finishes in various competitions, including several EVO championships and even broke three Guinness World Records. Daigo still competes in tournaments, currently with Red Bull’s team and Team Beast, and does so with the high level of passion that has propelled him to success throughout his career.

What Street Fighter player has won the most Capcom Cups?

Throughout the seven Capcom Cups, no player has finished in first-place more than once. The Capcom Cup first began in 2013 and continued for six more years through 2019 before the COVID-19 pandemic. In its initial year, Naoto Sako finished in first place, followed by Xian in second place, and Fuudo in third place. Xian continued to experience success, as he finished in second place in 2014 and third place in 2015. Other first place finishers include Momochi, Kazunoko, NuckleDu, MenaRD, Gachikun, and iDom.

What Street Fighter V player has won the most prize money of all time?