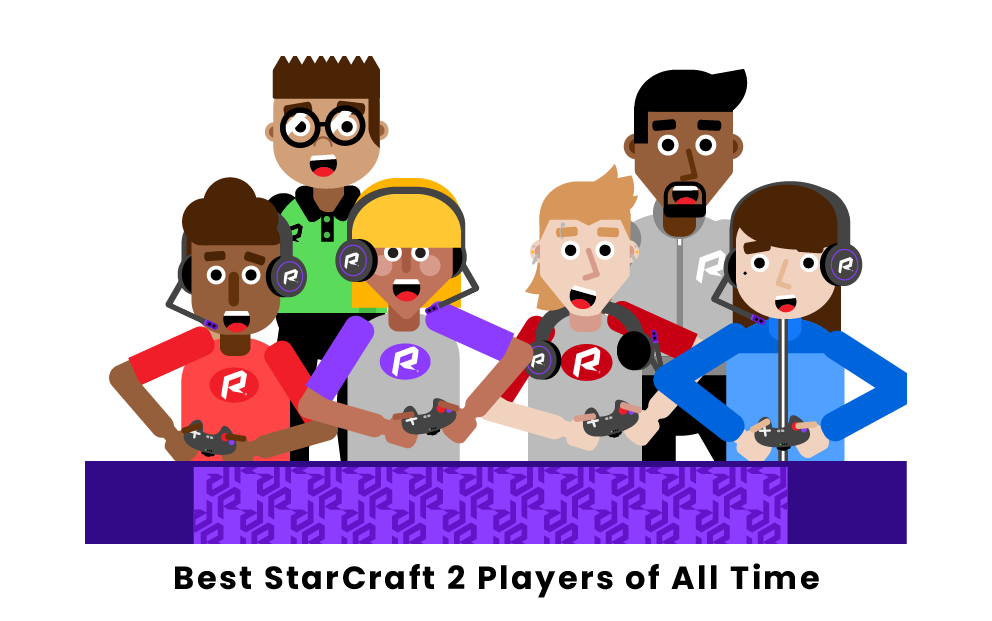 StarCraft II is a real-time strategy game developed by Blizzard Entertainment, released in 2010. It has found immense success over the years in the competitive eSports scene. Numerous pro players have carved their legacy into this game; this list will highlight the top six.

Who are the best StarCraft 2 players of all time?

Life is a South Korean Zerg StartCraft II player who was known as one of the greatest players ever at the peak of his career. Although his career ended marred with controversy due to a match-fixing scandal incident, his talent is undeniable. Life has the second-most career winnings, over $450,000, and the second-most Premier tournament wins of any StartCraft II player in history. Some of the most iconic wins in Life's career include a WCS Global Finals win in 2014, the 2012 GSL Blizzard Cup, and placing second globally in the WCS in 2015.

Mvp is a retired Korean Terran StarCraft II player who earned more than $300,000 in prize money in the StarCraft II Wings of Liberty era. He is one of the five co-founders of the Incredible Miracle team at the start of StartCraft II. Mvp is known as one of the greatest players of all time. His impressive career resume backs this up, including winning the 2011 WCG, placing first in the BlizzCon 2011 StarCraft II Invitational, and first place at the August 2011 GSL. After so much success in the game and the competitive scene, Mvp's inclusion on this list is more than justified.

Maru is a Korean Terran player who has been a prime example of dominance and skill since his entrance into the professional StarCraft II scene. Maru has been breaking records since 2010 when he started playing the game at the age of 14. Maru has been the only Terran player to win two GSLs successively, the first player to win three and four GSLs in a row, and the first player ever to break the 3000 point mark on Aligulac. As if these impressive achievements aren't enough, Maru also has earned over $997,000 from 145 tournaments during his time as a pro.

MC is a Korean Protoss Player and a member of ROOT Gaming, known for his skill in the game and a flair for dramatics; MC is one of the greatest players StarCraft II has ever seen. MC quickly found success after being the first South Korean Brood War pro to announce the StarCraft II switch publicly. MC went on to win numerous accolades, such as being the second player to achieve the Triple Crown, becoming the first Protoss to have reached three GSL Code S Finals, and the first player to win two GSL Tournaments.

Zest is a Korean Protoss player and is a professional member of the Dragon Phoenix Gaming team. Zest found success early and often became a "Royal Roader" by winning his first GSL during his first appearance in 2014, and by 2015 was ranked the 8th best player in the world. This rise in recognition and success is justified by his numerous notable achievements, including being the sole player to make it to the IEM Katowice Finals three times, winning the IEM Season IX World Championship, and having the most wins in the 2015 SK Telecom Proleague.

soO is a Korean StarCraft II pro who, while primarily playing as the Zerg, became one of the most well-known players in competitive play. He was an aggressive player, and at first, soO originally started playing StarCraft Brood, but it wasn't until StarCraft II that he hit his stride. While known for being the "runner-up" in many major competitions, soO still did well for himself, notably winning Global StarCraft II League Season 3 and placing second in the 2017 WCS Global Finals. Over his time as a professional, soO was able to earn around $587,453 in prize money. Undeniably successful and skilled, his eight-year career spanning 2012-2020 is one of the best.

Who is the best StarCraft 2 player of all time?

The best StartCraft II player of all time is Lee Seung-Hyun, known as Life. The South Korean Zerg player was one of the biggest stars and notable names in the StartCraft II competitive scene. From the start, he became the youngest champion of a major South Korean StarCraft II league and the third-youngest player to have ever appeared in a televised StarCraft II match. As the second all-time leader in career earnings and premier tournament wins, his success speaks volumes about his skill level.

What StarCraft 2 player has the most Starcraft II World Championship Series wins?

There has only been one player ever to win two Starcraft II World Championship Series, the Korean Protoss player sOs. As the only officially recognized two-time winner, sOs won his first WCS Global final in 2013, then became the only WCS Global repeat winner in 2015 when he beat major professional StarCraft II player Life in a thrilling 4-3 victory.

What StarCraft 2 player has won the most prize money of all time?

The StarCraft II competitive E-Sport scene has always been very lucrative, and the top players are compensated handsomely. The Finnish Zerg player, Serral, has the most career earnings of any StarCraft II player. Serral has accumulated an astounding $1,143,488.55 from over 140 tournaments in his short career and has done so at only 23 years old. Pro players Rouge ($1,033,981) and Maru ($1,004,622) place second and third on all-time global career earnings.