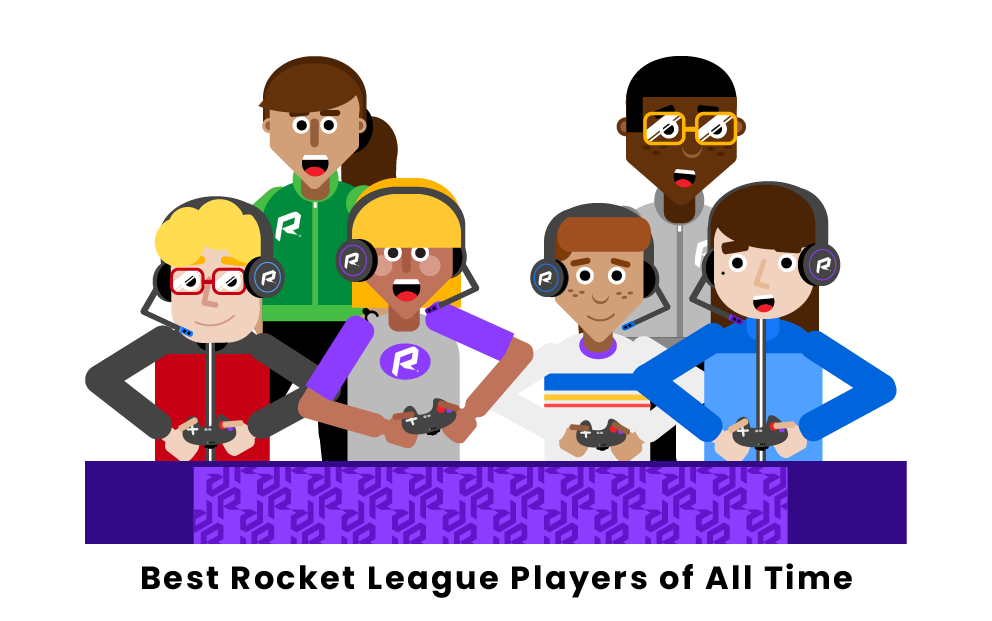 Rocket League is a highly competitive eSport and pastime enjoyed by millions worldwide. The competitive scene has been growing, especially with the game's highly intricate strategies and physics. The competitive nature of the Rocket League has allowed its eSports players to grow and get better, and this list covers some of the best ever to play the game.

Who are the best Rocket League players of all time?

Kaydop is a French Rocket League player who started his career in 2016. Since then, he has established himself as one of the premier Rocket League players globally; he has reached the highest rank of Supersonic Legend, placing himself apart as one of the actual best in the game in terms of skill. He has accomplished feats like winning MVP during the 2020 Intel World Open and placing second in the RLCS Season 8 World Championship as part of the Renault Vitality team. His five-time streak of dominance at winning the RLCS Regional Championship only furthers his case for his inclusion on this list.

Pierre Silfver, better known as Turbopolosa, is one the best players ever to play Rocket League professionally. Turbopolsa has won four total RLCS titles, the most of any player and nearly half of all RLCS ever held. Turbopolsa has had an astonishing 80% Grand Championship win rate and has 58 Tournament wins under his belt. These titles include notable wins such as his triumph during the Season 8 RLCS, where he won his title in overtime after not making the RLCS in the previous season for the first time in his career, and his Season 5 RLCS win where he became the first and only three-peat champion in Rocket League Esports history.

Widely acknowledged as the greatest North American Rocket League player and nicknamed "The Statesman," GarrettG is unquestionably one of the best players of all time. A professional esport Athlete for NRG Esports, GarrettG was the first to score 1500 goals for a single team. He found success during his career, becoming the only player to make it to all RLCS LANs, being ranked the fifth-best player worldwide in 2021, and being the first player ever to reach 100 RLCS series appearances. His career's highlight was his triumph during the Season 8 RLCS Finals, where he finally claimed the title after eight years of coming close but never winning it all.

ViolentPanda is a Dutch Esports Rocket League player who is also one of the greats in the sport's history. Starting his career back during the game's initial release in 2016, it wasn't until later that he would begin to find success competitively, when he won the 2017 NVidia Best Buddies Tournament. ViolentPanda would then go on to team up with GaleForce Sports alongside legends Kaydop and Turbopolsa and win his first RLCS during season 4. After winning Seasons 4 and 5 RLCS as well as placing second during season 6 ViolentPanda established himself as a force to be reckoned with, showing that he belonged with the best.

French Rocket League player Fairy Peak! is a member of the Pro eSports team Vitality, and has been playing since 2016. He has also achieved a Supersonic Legend ranking and is one of the greatest ever to play RL professionally. Fairy Peak! claimed his first professional tournament win in 2017 when he won the RLCS Season 3 European division and placed second globally in the finals that year. He has since then won the global RLCS during the Season 7 series and is still poised for more success in the future with his Season X European Championship victory and winning the Golden Striker award following Season 9.

Jstn is an American pro eSports player for The General NRG Rocket League team, where he has been a member since 2018. With NRG, he even won the RLCS Season 8 World Championship. Thanks to three North American RLCS titles and a second place finish for his team during the RLCS 2021-22 - Fall Split Major, he was also ranked the number-two player globally in 2021. While less seasoned than some on this list, Jstn’s 39 tournament wins and $450,000+ career earnings show that he is undeniably skilled and has found immense success in the world of professional gaming.

Massimo Franchesci, better known by his gamertag “Atomic,” is an American professional Rocket League Player that is one of the most exciting young players in the game. He has played for Ghost Gaming, Vanguard, and Team Envy before landing at his current team, G2 Esports. He has won two RLCS MVP awards, one coming from the 2021-2022 Winter Major and the other from the 2021-2022 World Championship. While he has not yet won the RLCS World Championship, he came in second in the 2021-2022 edition.

Jacob “JKnaps” Knapman has been a competitive player of Rocket League since the game was first launched. Despite starting out as a member of NOVA, JKnaps has played under the G2 Esports banner since 2017. With them, he has not yet won any world championships but has been awarded nine MVP titles. A stellar teammate, he is renowned as one of Rocket League’s oldest and best players of all time.

Evan Rogez, known online as “M0nkey M00n,” is a French player who has recently risen to the highest tiers of Rocket League competition. Though he started out as part of team ZeNoMoon, team Scooby Snacks, and even team ARG, M0nkey M00n hit his professional stride when he began playing in 2020 for Team BDS. With them, he has won 4 A-tier tournaments, won two MVP titles, and was the 2021-22 winner of the RLCS World Championship. With two phenomenal years in Rocket League behind him, M0nkey M00n surely has many more to come.

Who is the best Rocket League player of all time?

Of the many greats in Rocket League history, the best of all time has to go to Kaydop. The facts speak for themselves in terms of his resume: Kaydop is the only player ever to win the RLCS Regional Championship five times in a row and has been in every RLCS Grand Finale since Season 3. Not to mention he has earned over $500,000 during his career from a stunning 170+ tournaments, establishing his dominance and undoubtedly adding to his already solid case for the best Rocket League player of all time.

The Rocket League Championship Series (RLCS) is the highest form of competition in the world of Rocket League; it is where the best of the best rise to the top and legends are born. Turbopolsa holds the coveted title of most wins in RLCS history; he has four himself, which is almost half of all RCLS ever held, both a staggering figure and a fitting way to show Turbopolsa’s love and mastery of the game.

What is the highest rank in Rocket League?

For many years, the highest division one could reach was Grand Champion I; this ranking was challenging to gain due to the sheer wins and skill needed, having only .03% of the top players included in this rank. Yet as the game evolved, it now includes the rank of Super Sonic Legend, which is only made up of the top .01% of active players. It is also the only rank not to have tiers, making it the mark of a true master of the game.