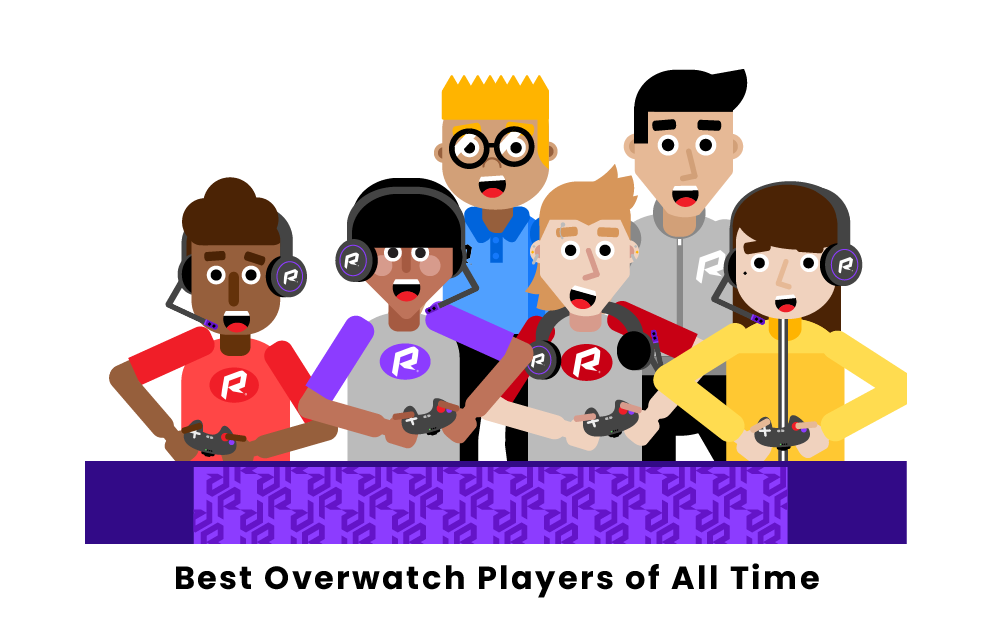 While the Overwatch League (OWL) is a relatively new league, with its inaugural season taking place in 2018, it has quickly become one of the most popular esports arenas. Throughout its short life span, many players have competed in the OWL, and a few have earned reputations as the best for their unique playing styles. Here are the top six best Overwatch players of all time.

Who are the best Overwatch players of all time?

Jehong “ryujehong” Ryu is often considered the best Overwatch player of all time. Ryujehong began his professional Overwatch career competing for Lunatic Hai, where he won two APEX Championships. He quickly established himself as one of the best support players in the game through his skillful play along with impressive accuracy. While Ryujehong was talented at playing as many heroes in the game, he began to dominate while playing as Ana. Throughout his career, he was able to bring first place victories back to his home country of South Korea in both the 2016 and 2017 Overwatch World Cup. Ryujehong most recently competed for the Vancouver Titans and is now a content creator for Gen.G esports.

Joon-yeong “Profit” Park is another one of the most talented Overwatch players of all time. He has made a name for himself in the professional realm as one of the best tracer players who can compete as almost any DPS (Damage Per Second) hero. One of the highlights of Profit’s career was the run he made with GC Busan in Season 4, where he helped his team finish in first place. Shortly after, he left to play for the London Spitfires where he also saw success, including first-place finishes in the OWL- Inaugural Season Stage 1 Title Matches and the Overwatch League- Inaugural Season Playoffs.

Jae-hee “Gesture” Hong is one of the best tank players in Overwatch history. Gesture began his career competing alongside Profit with GC Busan, where they led the team to beat well-established teams such as Cloud9 KongDoo and Lunatic Hai to finish first in APEX Season 4. After GC Busan was acquired by London Spitfire, Gesture quickly gained attention through his talented hero play as Winston. He competed for London Spitfire before joining Seoul Dynasty in 2020, where he came in second place in the Overwatch League 2020 Playoffs- Grand Finals. Gesture has moved into the coaching realm in recent years, sharing his knowledge and expertise with his players on New York Excelsior.

Jong-ryeol “Saebyeolbe or SBB” Park is known as one of the most clutch trace players in Overwatch history. He competed in three seasons with OGN, with one of his most memorable performances being when he destroyed KongDoo Panthera all by himself while playing as Roadhog. After his time with OGN, SBB teamed up with New York Excelsior in the Overwatch League, where he frequently executed critical plays to lead the team to victories, including first-place finishes in the OWL- Inaugural Season Stage 2 and 3 Title Matches. He most recently played for the Seoul Dynasty before retiring in 2021.

Sung-hyeon “JJoNak” Bang is one of the top current Overwatch support players. While he maintained a low profile earlier in his career, JJoNak became a notorious player after joining New York Excelsior, where he established himself as one of the best to play as Zenyatta. While unconventional, he is known for his aggressive playstyle as a support player. JJoNak regularly inflicts high levels of damage to other players in his games. Through his time with New York Excelsior, he helped the team to several first-place victories, and in 2018, he also won the Overwatch World Cup with Team South Korea. He most recently competed with the Seoul Dynasty.

Dong-gyu “Mano” Kim is one of the most talented Overwatch tank players, who often plays alongside fellow player Miro. He first made an international splash when he was selected to compete in the 2017 Overwatch World Cup with Team South Korea, where he helped the team finish in first place. In the first season of the Overwatch League, Mano joined New York Excelsior, where his extraordinary front-line play supported the team in numerous victory performances. After several successful years with New York Excelsior, he transitioned to compete for the Philadelphia Fusion before recently stepping away to carry out his mandatory military service in South Korea.

Hyeon “EFFECT” Hwang hails from South Korea, and is known for having an interesting history as an Overwatch player. He initially started out as a player for APEX Challenges Season 2, playing for Team Meta Bellum, but eventually transitioned to Team EnVyUs, whom he helped to place fourth in the Overwatch APEX Season 3, and eventually in first place in the Overwatch Contenders 2017 Season 1: North America. In late 2017, EFFECT joined the Dallas Fuel, but his performance there was hampered by conflicts with his teammates. After spending two years with the Dallas Fuel, EFFECT announced that he would be retiring from gaming in 2019, citing mental health issues as a contributing factor. Nonetheless, he remained with the Dallas Fuel as a streamer despite not playing competitively. EFFECT is known for his powerful DPS Engine, and for his use of the character “Tracer,” with whom he was extremely effective.

Hae-seong “Libero” Kim is another South Korean Overwatch player known for his versatility and skill at playing as multiple game heroes. Libero joined the New York Excelsior in 2018, and aside from representing his home country in the Overwatch World Cup that year, he has remained devoted and loyal to his team. Libero and the New York Excelsior have three first-place finishes together, in the second and third-stage Title Matches of the OWL Inaugural Season and the 2018 OWL Inaugural Regular Season. Though he started out mostly playing as the character Hanzo, Libero has made his mark on many characters in Overwatch, including Mei, Genji, Junkrat, and Pharah.

Miro is a dominant tank and coach from Korea. He got his start playing for the Lunatic Hai team in the Overwatch Power League. With Miro’s help, the team achieved back-to-back victories in the second and third seasons of Overwatch Apex. Miro achieved international success when he won the inaugural 2016 Overmatch World Cup. He was also voted MVP of the tournament. Miro perfected a style of jumping around the map that became the standard for tank strategy. In 2017 he moved to team Seoul Dynasty, where he saw a slump in performance. Miro retired from competition at the end of the season. He later returned as a streamer for team Gen.G. In 2021, he moved to a coaching position for Team Diamond.

Who is the best Overwatch player of all time?

Ryujehong is considered the best Overwatch player of all time. He was one of the original competitive players who made a name for himself by leading Team South Korea to victory in the first and second Overwatch World Cups. Throughout his career, Ryujehong set a precedent for support players, proving to be one of the most talented players to ever compete as Ana. He played for several teams, including Lunatic Hai, Seoul Dynasty, and the Vancouver Titans, where he accumulated multiple first-place victories before taking a break to focus on content creation.

What player has the most Overwatch World Cup wins?

What Overwatch player has won the most prize money of all time?

Pages Related to Top 6 Best Overwatch Players of All Time