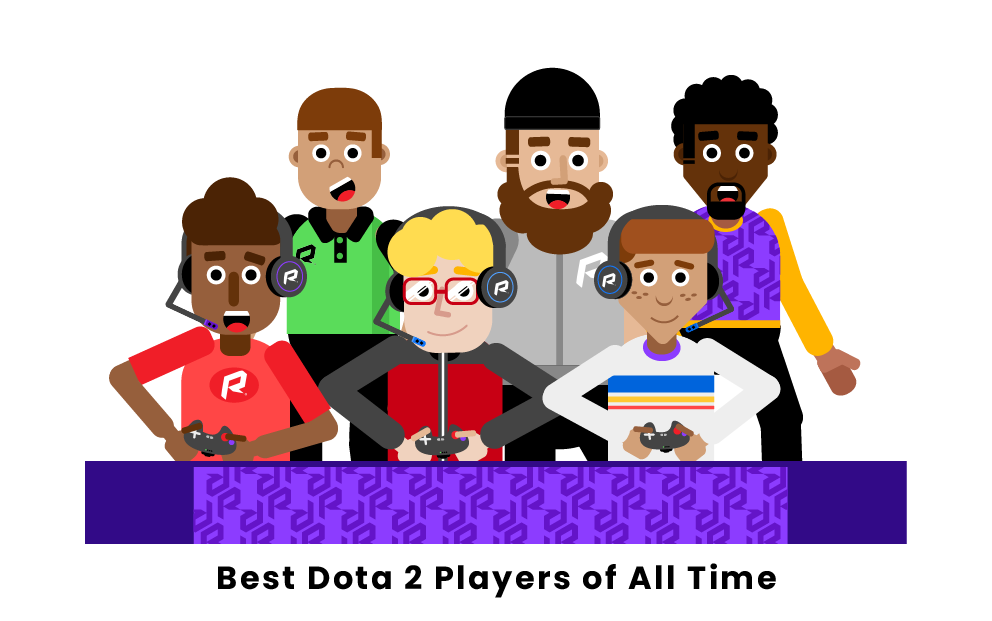 Dota 2 is one of the most popular esports games in the world, with millions of players competing in this multiplayer real-time strategy video game. Dota 2’s popularity and the world of esports as a whole continue to grow thanks to these stars. Here are the top six best Dota 2 players of all time.

Who are the best Dota 2 players of all time?

Johan “N0tail” Sundstein is a Danish esports legend that has starred in Dota competitions since 2012. He transitioned to Dota after a successful run in Heroes of Newerth, bringing several of his old teammates along for the ride. They won their first Dota event in 2012 at the Thor Open and the following year were invited to The International for the first time, finishing in the top eight. In 2015, N0tail decided to start his own team after some players left his previous squad. aHe founded the OG team, which has become one of the greatest teams in the world of Dota 2. N0tail and his team won the 2018 and 2019 The International tournaments, becoming the first team to win back-to-back titles.

Amer "Miracle-" Al-Barkawi has been one of the world’s elite Dota players since 2015. After a rocky start to his career in which he struggled to stick with a professional team for long, he went solo and became the #1 player by MMR in the European division and the world. His incredible success earned him a spot on N0tail’s upstart OG team, which quickly became one of the best in the world. After winning several tournaments as a member of OG, including the Frankfurt Major, DreamLeague Season 5, and ESL Frankfurt 2016, Miracle- eventually left the team, opting for Team Liquid, where he won The International 2017.

Topias Miikka "Topson" Taavitsainen is a professional Dota player from Finland. A lifelong fan of Dota, Topson has been playing since he turned seven years old. He turned his back on the dream of becoming a chef to compete in Dota, and the move has paid off. Topson joined OG in 2018 and was an instant success, winning the theScore esports Awards 2018: Rookie of the Year. That year was the first of back-to-back The International tournament victories for Topson and OG. During the second championship run, Topson led all players with an impressive kills per game rate of 9.43.

Xu "fy" Linsen is a Chinese Dota star and professional player. After getting started in 2013, fy quickly became recognized as one of the best support players in the world and an elite 1v1 player. He won the ECL 2013 Dota 2 Season and The Summit 1 in 2014 as a 1v1 player and then started to break out in team play as well. In 2014, he helped Vici finish second in The International, marking the first of four times he would lead a team to a top-five finish in the tournament. Overall, fy is the all-time leader in premium/professional matches played.

Danil "Dendi" Ishutin is one of the oldest members of this elite list of Dota 2 players, as the Ukrainian star became a professional in 2006. Honing his craft through hours of hard work in internet cafes, Dendi eventually joined forces with the Natus Vincere team. There, Dendi excelled, earning three straight top-two finishes in The International from 2011 to 2013. His team won in 2011 but was unable to secure another title afterward. However, Dendi did become the only person to compete in The International tournament six times for one organization. His longevity and skill also allowed him to break the record for most games played with one team, with 1039 games.

Kuro "KuroKy" Salehi Takhasomi is a professional Dota 2 player from Germany. He credits his disability for getting him started in video games, which allowed him more time to master his craft when he was growing up. Starting his professional Dota 2 career in 2011, KuroKy has since tied the record for most appearances in The International with nine, including a victory in 2017 and a runner-up finish in 2019, both with Team Liquid. His longevity and skill have helped him break the record for most career wins and most unique heroes played in pro matches.

Who is the best Dota 2 player of all time?

The best Dota 2 player of all time is Johan “N0tail” Sundstein. He created the OG team, which has been one of the most dominant teams in Dota 2 competition, and he is the only player ever to win back-to-back tournaments at The International in 2018 and 2019. His long-term dominance as a Dota 2 player has made him one of the most financially successful esports players ever. N0tail has now transitioned into a coaching role for team OG, as he develops the next wave of great Dota 2 players.

What Dota 2 player has the most tournament wins in The International?

What Dota 2 player has won the most prize money of all time?