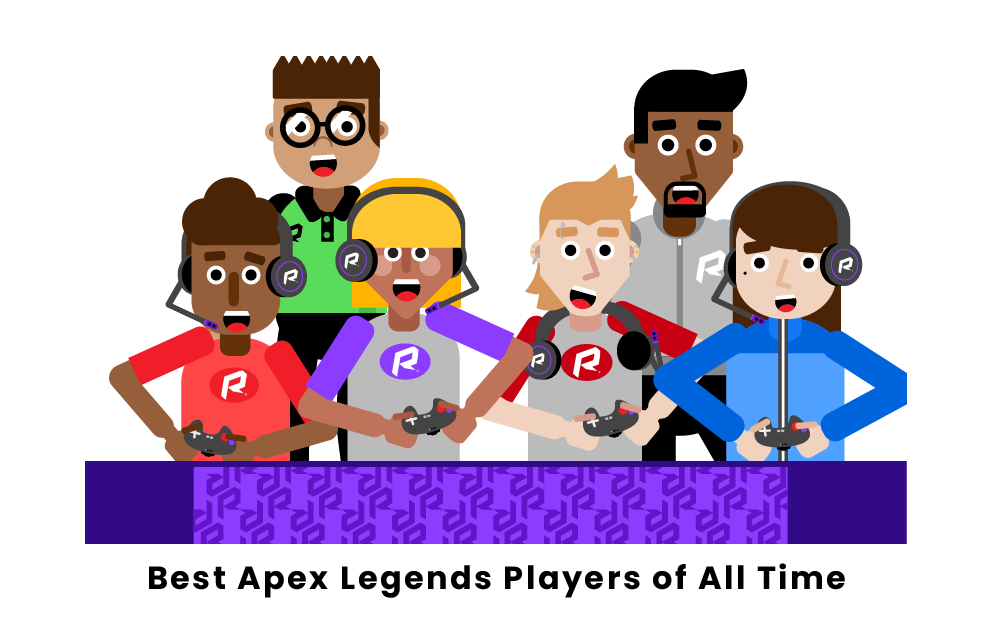 Since its release in February of 2019, Apex Legends has become one of the most popular and exciting new battle royale role-playing games in the gaming community. Many people are drawn to Apex Legends by its unique, immersive story and characters, while others enjoy its fast-paced playing style and a wide variety of distinctive characters and playing abilities. Since the release of the game, many professional streamers and tournament competitors have become renowned for playing Apex Legends, and here, we look at the top six best Apex Legends players of all time.

Who are the best Apex Legends players of all time?

Phillip “ImperialHal” Dosen was born in 1999, and prior to playing Apex Legends, he made a name for himself playing various other games. ImperialHal first started in eSports by joining Cloud9’s H1Z1 team in 2017, but the team quickly separated after placing fourth in the H1Z1 Elite Series - Atlanta. ImperialHal then moved on to Fortnite in 2018, playing with Team SoloMid (TSM) for one year and earning $5,000 in the 2018 Fall Skirmish Series.

Mac “Albralelie” Beckwith rose to fame on the Apex Legends circuit by joining TSM in 2019, playing alongside ImperialHal, Reps, and ProdigyAces. While a member of TSM, Albralelie won a total of 10 tournaments in 2019, placed second in two, and placed third in one, earning a total of $72,926.99 over 15 tournaments. Albralelie remained with TSM through most of 2020, winning nine more tournaments with them, placing second in another three, and placing third in five. However, late in 2020, Albralelie left TSM for Team Liquid, winning two more tournaments, one in 2020 and another in 2021. He also played briefly for Cloud9, winning one tournament with them, in addition to playing as a free agent in 2021, moving in and out of team competition. In 2021, Albralelie won an additional four tournaments as an independent player. Overall, he has accumulated total winnings of over $120,000 across 54 tournaments, which ranks him #1605 in highest overall earnings and #303 in highest earnings for players in the U.S.

Jordan “Reps” Wolfe plays both Apex Legends and Realm Royale, the latter of which began his gaming career in 2018 when he was 23 years old. In 2019, Reps played a few Apex Legends tournaments as a free agent at the beginning of the year, winning the Strong Esports: 1k Premier Series #1 and the WES Global tournament, in addition to placing second at the Liquid Apex Proving Ground 3 and 5. After these victories, Reps joined TSM in June of 2019, joining them for many of their tournament victories.

In 2019, Reps and TSM won five tournaments together, giving Reps total earnings of $68,193.66 across 14 tournaments. Since then, Reps has remained a core member of TSM, playing alongside ImperialHal and many other players. In 2020, Reps and TSM won 11 tournaments together, placed second in seven, and placed third in another seven. This led Reps to a combined earnings of $28,386.68 in 2020 across a total of 30 tournaments. Continuing with TSM in 2021, Reps won another tournament, the GLL Masters Spring - North America, and placed second in five more tournaments, with third-place finishes in another three. Overall, in 2021, Reps earned a total of $43,142.65 across seven tournaments. In total, he has amassed over $140,000 across 62 career tournaments, ranking him #1384 in highest overall earnings and #247 in highest earnings for players from the U.S.

One of the youngest players on our list, Coby “dizzy” Meadows was born in 2000 and began his gaming career as a simple streamer. At first, dizzy gained first-person shooter skills by playing over 1,300 hours of Counter-Strike: Source and Counter-Strike: Global Offensive, acting as a semi-professional player for Mythic and Selfless Gaming. When Apex Legends first dropped in 2019, dizzy immediately began to play, and after eight days, NRG Esports signed him as a player for its first Apex Legends team. On the same day, dizzy played in Apex Legends' first-ever esports event, the Twitch Rivals Apex Legends Challenge, alongside KingRichard and Ninja. This opportunity allowed thousands of fans to see him play for the first time. Dizzy’s time with NRG Esports has been successful thus far, leading him to win one major tournament, the Twitch Rivals Challenge - Road to TwitchCon San Diego #1 North America tournament. In addition to this win, dizzy and his team placed second in four tournaments in 2019 and third in three. Outside of playing with NRG Esports, dizzy has played in several tournaments as a free agent and has won seven Apex Legends tournaments as an independent player between 2019 and 2021.

In addition to Apex Legends, dizzy plays Rainbow Six Siege, Splitgate: Arena Warfare, Call of Duty: Warzone, and VALORANT. He has accumulated an overall total of over $85,000 in earnings across 29 tournaments, ranking him #2239 in highest overall earnings and #420 in highest earnings for players from the United States.

Jordan “HusKers” Thomas has been a professional gamer since 2017 and began his career by playing H1Z1 for Luminosity Gaming, as well as Call of Duty: Blackout. HusKers has won a number of tournaments in various games as a free agent, including one Apex Legends tournament, the 368: Apex Season 2 Tournament, in July of 2019. In 2019, HusKers played Apex Legends professionally for two teams: TSM and Team Rogue. As a member of TSM, HusKers won the FACEIT Pro Series Week 3 Tournament in June of 2019 and placed second in the Twitch Rivals: ALC North America 1 Tournament and the Code Red #3 Tournament. As a member of Team Rogue, HusKers won two Apex Legends tournaments, the TwitchCon Europe Showdown 2019 Qualifier 1 and the TwitchCon Europe Showdown 2019 Finals. HusKers and Team Rogue also placed second in the Twitch Rivals: Apex Elite Queue Challenge in June of 2019.

Across 20 Apex Legends tournaments, HusKers has accumulated a total of over $66,000 in prize money. HusKers is also an extremely active player in Call of Duty: Warzone, from which he has earned over $300,000 across 79 tournaments. In his overall career, HusKers has been extremely successful, winning a combined total of over $370,000 across 106 professional tournaments. This ranks him #434 in highest overall earnings and #79 in highest earnings for players from the U.S.

Who is the best Apex Legends player of all time?

Who has the most Apex Legends Global Series wins of all time?

What Apex Legends player has won the most prize money of all time?