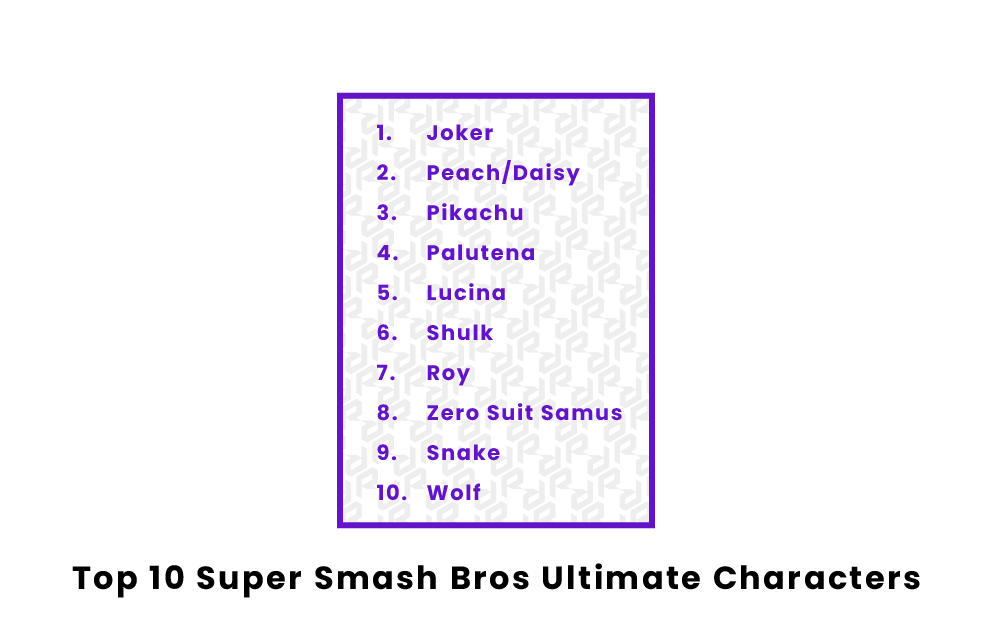 Super Smash Bros is a game that demands a lot from the players, including being familiar with the character they are using. Every character is unique in strengths and weaknesses, with some being better than others. These characters range from swift and tricky to brawny and overpowering. Keep reading to find out who the top teen Super Smash Bros Ultimate characters are.

What are the best Super Smash Ultimate characters?

Upon Joker’s addition to the usable characters in Super Smash Bros Ultimate, it was clear he would be a force to be reckoned with. When fully charged, Joker pairs up with Arsene, a menacing ghost who boosts Joker’s already impressive skill set. When Arsene is by his side, Joker has increased damage, attack range, and a much easier time taking out opponents. Although stacked with combo moves, using Joker is incredibly difficult and takes a great deal of practice to utilize effectively. With time and effort, Joker is the premier Super Smash character and the key to dominating your competition.

Peach and Daisy have identical attributes and combos, with their only differences coming in their appearance. The two characters were immediately adored for their nearly unbeatable aerial attacks, one of the hardest fighting tactics to counter. On top of that is their versatility, as the ground game is effective enough to make facing them an all-around nightmare. Add on their ability to throw projectiles, and it’s clear that these characters are the most well-rounded in the game. Like any character, they have their weaknesses, such as their underwhelming power and inability to be mastered quickly. But with proper care, these two princesses can be the deadliest characters in the entire game.

Pikachu is often regarded as the safest pick when it comes to choosing your character, as there is seemingly no bad matchup for them. What Pikachu brings to the table is elusivity, as most choose Pikachu for his ability to maneuver whatever map they’re on. Pikachu is also heavier than the typical speedy character, making them less of a risk to use. Pairing that with the ability to be a productive fighter anywhere on the map and it’s clear that Pikachu is always a smart pick. The downside of using Pikachu is that the character isn’t outstanding in any singular category, as they are more of a jack of all trades. Pikachu is the perfect safe choice and has a little bit of everything if you’re looking to compete no matter who you’re facing.

Palutena is a character used at every level of competition, and many use her for her silky smooth mobility. It can be incredibly difficult to land effective blows on Palutena, and in return, her ability to close large gaps makes her lateral movement her greatest asset. Not only does she have stellar movement, but Palutena’s aerial attacks and projectiles elevate her to being one of the best characters in the game. Despite all of these strengths, her greatest is her ability to juggle any opponent and control the pace of the game. While Palutena may be strong, she can be outmatched by other agile characters and isn’t always the best character when facing someone similar.

Lucina is a unique case, as at first glance she would seem like an undesirable character. While her moves may not be complex, Lucina is a premier choice for people who want a straightforward character that they can pick up immediately. She has the power, the defending, the spacing, and is capable in just about every facet of the game, making her an all-around great player. The reason for her popularity is just how easy it is to use Lucina, as many beginners find immediate success with her. At higher levels, players tend to label Lucina as a worse version of Marth and not worth using. However, when it comes to casual play, Lucina is still a smart option and will always give the user a chance to win.

Using Shulk is a tall task but an extremely rewarding character when done properly. His attacks are heavy hitting and difficult to stop, meaning that to defeat him, you have to outstrike him. He is a fan-favorite sword character who is known to be one of the most fun characters to play with. But with high striking capabilities comes an intricate set of skills that most users have trouble getting the hang of. Shulk is often used at higher levels but can be a challenging character for average players. If you’re willing to put in the hours, Shulk is as powerful as it gets.

Roy is a popular character for his special attacks, as proper offense with him can end the game quickly. The beauty of Roy is his sword attack and the uniqueness of the damage distribution. The closer Roy is to his opponent, the more damage he’s able to do. Combine that with his exceedingly fast movement and what he becomes is one of the hardest characters to stop. Despite the power Roy may have, playing against shield-bearing characters can give Roy a lot of trouble, as it forces him to work primarily in the air, which favors his opponent. If given a favorable matchup, Roy is the perfect character to deal loads of damage with.

Zero Suit Samus is an incredibly productive character and one that can be used at even the highest levels of competition. Zero Suit’s movement is second to none, primarily her recovery abilities and range of movements. Her next move is often unknown as a result of this, and even seasoned Super Smash players can find themselves slipping up against her. This may be the case in solo battles, but in group battles, Zero Suit is a lot less intimidating. Zero Suit Samus is another character that takes time to pick up, but the reward for the effort is worth it, allowing the player to strike whenever they please.

Snake is an interesting case as to some players, he is their favorite, and to others, he is nothing more than an afterthought. Snake’s power is evident as he incorporates weapons such as bombs and missiles that keep his enemies at a distance. People who have been playing Super Smash since its release appreciate Snake for his artillery and heavy-hitting style of play, while new players struggle to get used to his old-fashioned fighting tactics. The players who complain about Snake claim that he is ineffective in close-range fighting and can get juggled easily, but when played effectively, Snake is one of the scariest opponents you can face.

Wolf is one of the safest picks when it comes to choosing a character, yet the payoff is as sweet as any. Wolf is a lightweight character that still packs a heavy punch, immediately making him a fan favorite. Similar to Pikachu, there is no bad matchup for him as his skill set can defend him from any type of enemy. Despite his all-around skillset, Wolf lacks prowess when it comes to his recovery game. Wolf can be bullied when it comes to someone with higher attributes, but no player can truly dominate him. Wolf is the perfect pick to keep a game close, but you’ll need to play him the right way to maximize his potential.