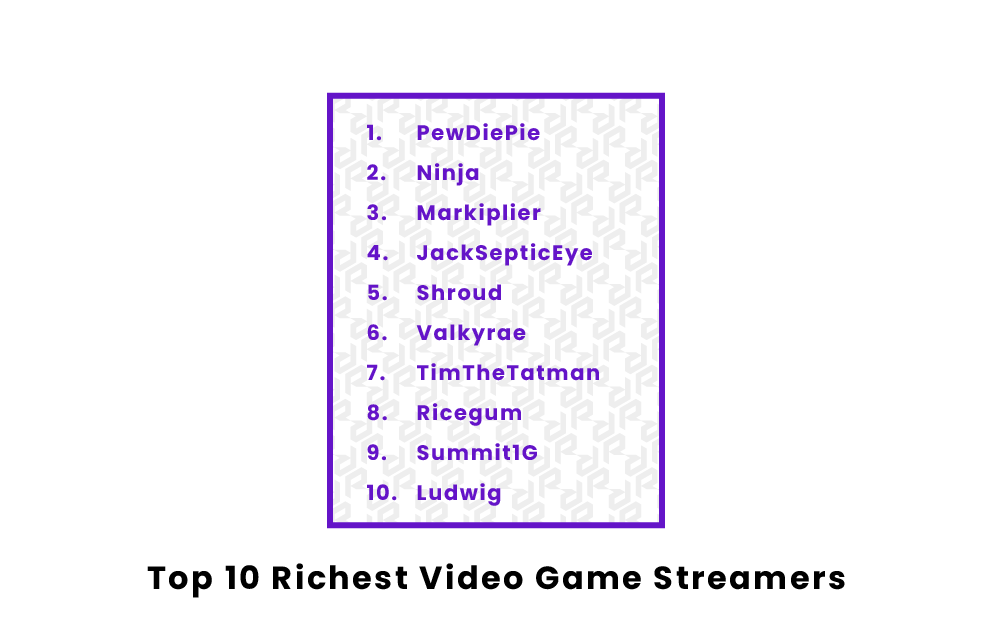 Video games have always been a favorite pastime for many, yet in recent years platforms such as Twitch and YouTube have allowed content creators to share and profit off of their talents, turning them into viable careers. Read on to learn about some of the wealthiest video game streamers of all time.

Who are the richest video game streamers in the world?

PewDiePie is one of the most famous personalities on YouTube and one of the most successful streamers the platform has ever seen, with a net worth of around $40-50 million. Felix Kjellberg is the wealthiest male streamer, the most successful streamer of all time, and has an absurd 111 million subscribers on YouTube and 1.3 million Twitch followers. PewDiePie rose in prominence mainly due to his notably entertaining youtube videos featuring him streaming while playing famous and lesser-known games. He set a record in August 2013 when he became the most subscribed YouTube channel of all time and also became the first channel to surpass 15 million subscribers.

Tyler "Ninja" Blevins has been one of the most recognizable faces in the streaming medium for years and has gained a net worth of $40 million. Despite getting his start in 2017 with famous battle royal games such as H1Z1 and PUBG, it wasn't until he moved to Fortnite that he started to blow up in success and popularity. Ninja also plays games such as Apex Legends, Valorant, League of Legends, Final Fantasy XI Online, Halo, and Call of Duty: Black Ops 4. In 2018 he was given Content Creator of the Year during The Game Awards, which undoubtedly helped fuel his $40 million estimated net worth.

American streaming star Markiplier, or Mark Fischbach, is undoubtedly one of the most successful streamers of his generation; his massive following of 32.5 million YouTube subscribers and 2.3 million Twitch followers certainly helped him reach his $30 million estimated net worth. Markiplier got his start by doing Let's Plays on Youtube, where he played popular niche horror games such as Five Nights at Freddy's and Amnesia and eventually moved into other games such as; Yandere Game Simulator, Elden Ring, Half Dead 3, Haunt Chaser, Resident Evil, and Among Us. Markiplier is also sponsored by such brands as Polaris, Endeavor, and Robot Entertainment.

Irish streamer and content creator Sean McLoughlin, or as he is known in the streaming world, JackSepticEye, is undoubtedly successful, amassing a $25 million net worth alongside 28.1 million YouTube subscribers and 2.8 million Twitch followers. JackSepticEye started his YouTube channel in 2007, and it was not until 2012 that he started moving into the streaming content side of things. This eventually led to him becoming the most subscribed Irish YouTube channel and was recognized by JCI Ireland for his cultural achievements in 2021. JackSepticEye is known for horror games but also plays games such as Bloodborne, Subnautica, and Minecraft.

Canadian YouTuber and Twitch streamer Shroud, or Michael Grzesiek, has accumulated a net worth of $20 million. Shroud, since his career started in 2017 when he began to focus on streaming, has been able to get 6.8 million YouTube subscribers and 10 million Twitch followers, along with an equally impressive $20 million net worth. Shroud's rise to prominence started with his escapades as a professional Counter-Strike: Global Offensive Esports player before he used that platform to launch his streaming career, which expanded into games such as Apex Legends, Escape from Tarkov, and Valorant, among other FPS-style games.

Rachel Hofstetter, or as her fans recognize her, Valkyrae, is one of the most successful female streamers of all time, with a net worth of $15 million. With 3.6 million YouTube subscribers and 1.1 million Twitch followers, the streamer has generated an impressive career. In 2018, Valkyrae became the first female gamer and content creator to sign with 100 Thieves; later, in April 2021, she became a co-owner of the organization. Valkyrae won the Content Creator of the Year Award in the 2020 Game Awards and is known for playing games such as Among Us, Fortnite, The Walking Dead, BloodBorne, and Valorant.

Timothy Betar, or TimTheTatman, is an American streamer with 4.4 million YouTube subscribers, 7 million Twitch followers, and an estimated  $10-12 million net worth. Growing up as an avid gamer, for TimTheTatman, streaming came naturally to him. His efforts were recognized in 2018 when he won the Fan Favorite Male Streamer/Gamer Award at The Gamers’ Choice award show. TimTheTatman is known for playing and streaming games such as; Counter-Strike: Global Offensive, World of Warcraft, Fortnite, Madden, Fall Guys, Call of Duty: Black Ops, PUBG: Battlegrounds, and Apex Legends.

Bryan Le or RiceGum is a well-known streamer who has been able to gain 10.2 million YouTube subscribers, 1.2 million Twitch followers, and an equally impressive estimated $7-$8 million net worth. In 2016, Le started focusing his efforts on YouTube full time and started his career mostly doing commentaries on other streamers' Call of Duty gameplays. RiceGum went on to shift towards comedy in his channel and content but was still able to maintain an impressive following among his platforms. RiceGum has commonly been seen streaming games such as Fortnite, Grand Theft Auto V, Call of Duty: Warzone, Call of Duty: Black Ops Cold War, Among Us, and NBA 2K20.

Jaryd Lazar, or Summit1G, has been able to acquire a net worth of $7.5 million. He was one of the first recognizable stars on Twitch and, until 2017, was the most followed channel on the platform. Summit1G is still widely successful today, with 706K YouTube subscribers and 6.1 million Twitch followers. While it was not until 2013 that Summit1G started to focus on streaming, before this, he was successful in his own right as a professional CS:GO player. Today he commonly streams games such as; Escape from Tarkov, Sea of Thieves, PUBG, Grand Theft Auto V, Apex Legends, and Fortnite Battle Royale.

Ludwig Ahgren, or Ludwig for short, is an American streamer with an impressive following of 2.7 million YouTube subscribers and 3.1 million Twitch followers alongside an estimated over $6.5 million net worth. Ludwig first uploaded a video to YouTube in April 2015, and it was not until 2019 that he became a full-time Twitch streamer. Most recently, in 2021, Ludwig signed an exclusive partnership with YouTube to stream on their platform. Ludwig is known for streaming and playing games such as; Super Smash Bros. Melee, Among Us, Valorant, Mario Party 2, Super Mario 64, Pokemon Platinum, Chess, and Minecraft.

Who is the most popular streamer?

Many factors decide who's the most popular streamer of all; subscriber count, net worth, and career longevity all go into the choice. Factoring these categories, one name stands above the rest: PewDiePie. PewDiePie, whose real name is Felix Kjellberg, is not only the most popular streamer by most metrics, with a staggering 1.3 million subscribers on Twitch and 111 million on YouTube, but also the most successful financially, with his net worth being estimated to be between $50 and $40 Million total.

Who is the richest female streamer?

Rachel Hofstetter, known by many as Valkyrae, is not only one of the most successful female gamers in the world but also happens to be the wealthiest female streamer. Valkyrae is an American steamer who is most well known for steaming the games Among Us, Fortnite, and Valorant. She has amassed an impressive 1.1 million Twitch and 3.6 million YouTube subscribers, which has helped fuel her equally impressive $15 Million net worth.

Who is the richest male streamer?

Streaming mainstay PewDiePie is not only the most popular streamer of all but also the wealthiest male streamer of all as well. This fact comes as no surprise, as his dedicated fanbase is evidenced by his 1.3 million Twitch and 111 million YouTube followers. This level of popularity does not come without success and financial growth, which to his credit PewDiePie was able to use to accumulate over $40 million in total career net worth.