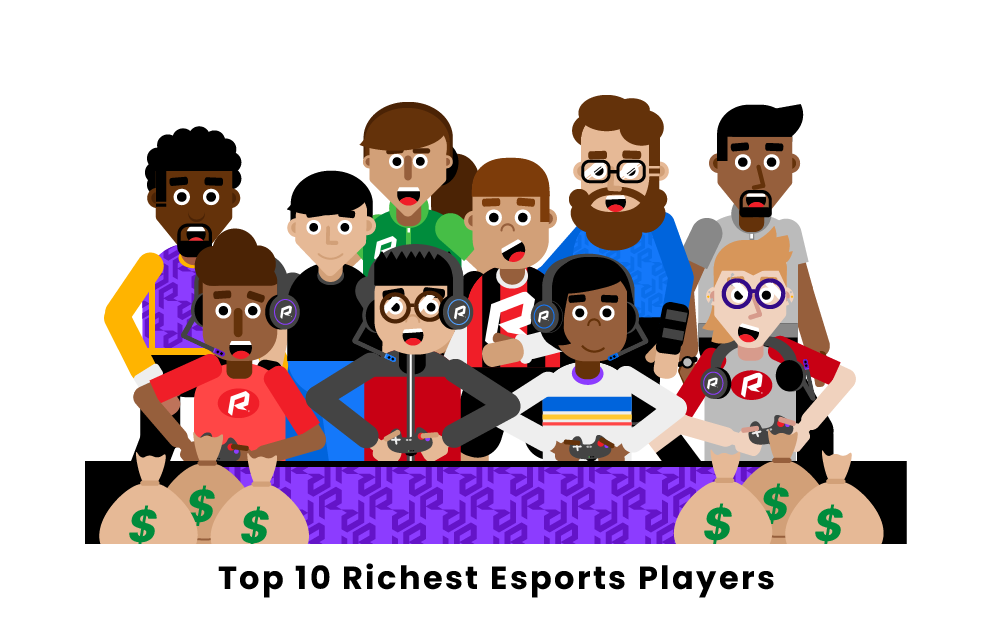 Who are the highest paid Esports Players?

Johan Sundstein is the richest Esports player in the world, with a net worth of over $6.8 million. The Denmark gamer started professionally gaming in 2010 when he was 17 years old. He first rose to fame while playing Heroes of Newerth. However, he’s had the most success once he switched to focusing on Dota 2.

Throughout Sundstein’s Esports career, he has amassed $6,915,222.80 from gaming alone. His biggest win of all time comes from winning over 3 million in The International 2019. He won over 2 million in this tournament the year before as well. Both of these wins were in Dota 2.

Jesse Vainikka is the second richest Esports player, with a net worth of $6.5 million. He is from Finland and has been gaming since 2013, primarily playing Dota 2, but he has also competed in VALORANT. Vainikka actually decided to retire in 2020 at 28 years old after an extremely successful gaming career.

Vainikka earned $6,470,548.78 from the 65 tournaments he’s competed in from 2013 to 2020. Similar to Sundstein, his largest winnings come from winning The International 2019 and The International 2018 in Dota 2, where he racked up over 3 million and 2 million dollars, respectively. Both Vainikka and Sundstein played with Team OG during those wins.

Anathan Pham is another high-earning Esports player with a net worth of $6 million. The Australian native started gaming in 2016 when he was 16 years old. Although he’s one of the younger players in the top ten, Pham has proven to be one of the best Dota 2 gamers.

The fourth richest Esports player is Sébastien Debs, who has a net worth of $5.4 million. Debs is from France and has been professionally gaming since 2011, when he was 19 years old. Throughout his career, he’s played with several teams, such as Alliance and Sigma, but his most success has come while with Team OG.

Another successful Esports player is Ivan Ivanov, who has a net worth of approximately $6 million. The Bulgarian gamer, also known by his player ID name “MinD_ContRol,” has competed in 70 tournaments since his first in 2014. He’s been a part of teams like Team Liquid, Ninjas in Pyjamas, and Nigma.

Ivanov’s most success has come from his time with Team Liquid, where he competed and won prize money during The International Dota 2 competitions from 2016 to 2019. He also had a big win when he placed first at the China Dota 2 Supermajor 2018. After all of these tournaments, he’s won over $4.5 million.

Topias Taavitsainen is another young gamer with an impressive net worth totaling $5 million. This Finnish Esports player began playing when he was eight years old. However, he didn’t compete professionally for the first time until 2014, when he was 16. He didn’t return to the professional scene until 2017, but he quickly made a name for himself over the next three years.

Taavistainen also won the International Dota 2 competition in 2019 and 2018 with Team OG. In addition to being one of the wealthiest Esports gamers after winning 5.4 million dollars from gaming, he’s also known for having a unique gaming style.

Amer Al-Barkwai from Jordan has a net worth of approximately $5 million. He’s been gaming since 2015, when he was 17 years old. He’s focused on playing Dota 2 professionally and his commitment has paid off. Al-Barkwai has played with multiple teams like Team OG, Liquid, and most recently, Nigma.

Amer Al-Barkawi has played in 61 tournaments, but his most successful have been The International competitions. He was on the winning team in 2017 when he won over 2 million dollars. He also placed 2nd in 2019, 4th in 2018, and between 9th and 12th in 2016.

Kuro Takhasomi also began professional gaming when he was 16 years and has built a net worth of $3.5 million since. Although this German Esports player is regarded as one of the top Dota 2 players, he also has won money while playing games in Artifact and Defence of the Ancients.

Most of his winnings came while he was a part of Team Liquid. He was actually the captain when his Dota 2 team won over $2 million at The International 2017. He also won almost a million the next year when his team came in second at the same competition.

Maroun Merhej is a Lebanese Dota 2 Esports player with a net worth of $2.5 million. He also likes to go by his player ID name GH; this is an abbreviation for “Go Home.” Merhej has been winning prize money from gaming since 2015 and has played in 48 tournaments since this time.

His big break in the gaming scene came when he won the MSI BEAT IT 2014 Middle Eastern Qualifiers. After this, he joined Team Liquid, where he helped them win The International Dota 2 tournament. This, amongst other wins, allowed him to win $4,171,919.04 over the course of his career so far.

Lasse Urpalainen is a Finnish Esports player with a net worth of $1.5 million. Urpalainen has been competing in tournaments since 2014 and has had a lot of success. Over the course of his career, he’s competed in over 70 tournaments and took first in 27 of those.

Urpalainen, like the other gamers on this list, owes his success to The International Dota 2 tournaments. He won with Team Liquid in 2017 and also placed in 2018 and 2016. He’s also won at other Dota 2 tournaments such as The Shanghai Major 2016 and multiple EPICENTER tournaments.

Tyler Blevins, better known as Ninja, is the most well-known Esports player in the world, which has resulted in his net worth hitting an unprecedented $25 million. Blevins is best known for his superstardom as a Fortnite steamer; however, he has also participated in other forms of Esports as well. His other pursuits within the Esports space have included Halo 3, Halo 4, and PUBG. In these earlier years, he has played for marquee gaming teams such as Luminosity Gaming, Cloud9, and Liquid Gaming. His Twitch stream and endorsements are his main source of income, with his biggest sponsor being Red Bull and his Twitch channel holding upwards of 250,000 subscribers. His YouTube channel also has more than 23,000,000 subscribers.

Why are all the richest players Dota 2 gamers?

All the current top ten Esports gamers are Dota 2 players, and this is not a coincidence. Dota 2 is easily one of the most popular Esports games in the industry. It also gives out the largest amount of prize money with its TI, or The International, tournaments giving out over $30 million. Since the prize money is so much larger than for other games, the winners of these tournaments end up being the highest paid players.

What are other high earning games besides Dota 2?

In addition to Dota 2, there are other games that stand out as more popular within the Esports industry as a whole. Games like CS:GO, League of Legends, Call of Duty, Fortnight, and Rainbow Six Siege all have similar, if not larger, prize money offerings and audience sizes to Dota 2. All of these games’ prize money and audience sizes are growing even more as the Esports industry continues to expand each year.

How much do most Esports players make?

The Esports industry has been growing quickly over the years, which has caused the pay for players to become more lucrative. Players mainly get paid based on prize money, sponsorships, streaming viewership, and tickets for major competitions, but the exact value can range greatly from a few thousand dollars to over a million dollars each year. Although their pay is mostly dependent on how well they do in tournaments, some players also get paid a salary of $3,000 to $5,000 per month in popular gaming areas.

Why are there no high paid female gamers?

As Esports has gotten more popular, the wage gap has become more evident. In the list of the top 100 highest paid gamers, no females made the list. The highest paid female, Sasha Hostyn, has made just over $370,000. Part of the problem is that not as many women are competing in high-earning games like Dota 2. This issue is becoming more talked about in the industry, and more people are fighting to encourage women to game.