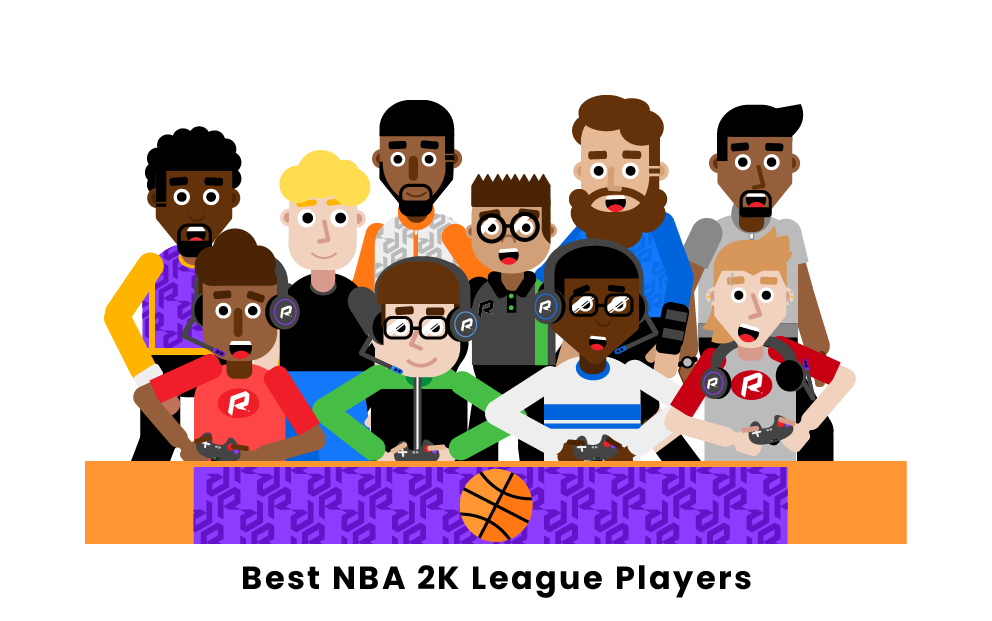 NBA 2K is far and away the most popular NBA basketball game on the market, and has been for quite some time. A recent rise in the popularity of competitive NBA 2K has resulted in the formation of professional teams backed by NBA franchises, as well as star gamers who play for these teams. Read on to learn about the most popular eSports athletes in the world of competitive NBA 2K.

Who are the most popular NBA 2K League players?

Mama Im Dat Man, whose real name is Nidal Nasser, was born in San Bruno, California and has been a top competitor in the NBA 2K League since he was drafted by Blazers Gaming in 2018. He is the team’s point guard and earns the top spot on this list for his consistent high-performance over the past few seasons. In the 2019 and 2020 expansion drafts, he was chosen as one of their two protected players, securing his continued role on the team. In season 2 of 2019, Mama Im Dat Man dominated the league, taking home the MVP award as well as earning a first team all NBA 2K league selection. Nasser finished top-3 in assists in both 2018 and 2019 while also leading the league in points in 2019. Mama Im Dat Man is known as one of the most talented offensive players in the league and is undeniably a huge threat to his competitors.

OneWildWalnut, aka Dayne Downey from Los Angeles, California is another star player consistently headlining the NBA 2K League. Adding to the talented roster of Blazers Gaming in 2018, the center was selected with the 6th pick in the first round of the 2K League draft. He was the second player chosen by Blazers Gaming to be protected in the 2019 and 2020 expansion drafts, emphasizing his importance to the team. In 2018, OneWildWalnut became the 2K League’s inaugural MVP and Defensive Player of the Year. This is an extreme testament to his skill, as it is not often to see these two awards given to the same player in one season. The following season, Downey continued his outstanding performance in the league. While he narrowly lost the MVP race to his teammate, Mama Im Dat Man, OneWildWalnut still received the honor of being selected to the all NBA 2K league first team roster. He led the league in blocks during the 2021 season.

Kenny Got Work, or Kenneth Hailey, is from Memphis, Tennessee and is the small forward for Raptors Uprising GC. He was drafted as the 11th overall pick in the 2018 NBA 2K League draft. Raptors Uprising GC protected Kenny for both the 2019 and 2020 expansion drafts, keeping him a vital part of their team. Kenny became well known in the 2K community after winning the NBA 2K17 All-Star Tournament and taking home $250,000 for his team, “Still Thrill.” In 2018 and 2019, Kenny led the team in scoring and assists. In 2020, Kenny took home both the MVP award as well as the Fan Engagement Award in a season where he led his team to a 16-0 regular season record. He was also named to the All-NBA 2K First Team and All-Defensive Team in 2020.

oFAB, aka Albano Thomallari is the point guard for Cavs Legion GC in the NBA 2K League. Thomallari is from St. Louis, Missouri and has been a consistent threat to his opponents since being drafted in 2018. oFAB was selected with the 2nd overall pick in the 2018 NBA 2K league draft. Celtics Crossover Gaming used one of their protected player spots on oFAB for both the 2019 and 2020 expansion drafts to secure his spot on the roster. His outstanding play in 2019 season 2 won him a selection to the All NBA 2K League First Team. oFAB finished in the top 10 in both assists and points for the 2021 season.

Regg of the NBA 2K League, or Reginald Nash in real life, is the point guard for Bucks Gaming. He was drafted as the 12th overall pick in the 2020 2K league draft by Bucks Gaming. Regg won the 2020 Rookie of the Year award after placing fifth in the league in scoring and second in assists. He was also named to the All-NBA 2K Second Team and All-Rookie Team during the 2020 season. Regg continued his strong start to his career by finishing top-15 in both points and assists in 2021.

Sten Valge-Saar, also known as SAV, is originally from Canada and is the current point guard for Heat Check Gaming. He was drafted as the 7th overall pick in the 2020 NBA 2K league draft and has certainly not disappointed. After his strong rookie season, SAV finished top-20 in the league in points and third in assists in 2021. Despite his strong performance, however, Heat Check Gaming was unable to make the playoffs in 2021.

Christopher Charles goes by Duck in the 2K gaming world and is the point guard for Knicks Gaming. He was drafted with the 2nd overall pick in the 2020 2K league draft. His individual performance has surprised many within the 2K league and has proved him to be a fierce competitor amongst other veteran players. After a promising start to his career, Duck finished 10th in points and 15th in assists during the 2021 season. He was able to help guide his team to the second round of the 2021 playoffs, where they lost to the eventual champions, Wizards District Gaming.

Vandi, whose real name is Zach Vandiver, is the point guard of Grizz Gaming in the NBA 2K League. He originally is from Aurora, Ohio. Vandi was drafted in 2019 with the 7th overall pick by the Grizz Gaming franchise. Vandi had a stellar rookie performance in 2019, averaging 25.2 points (12th in total points) and 9.9 assists per game (10th in total assists). He led Grizz Gaming to an 18-10 season in 2021, which was sixth best in the league while placing top-15 in both points and assists. With some impressive scoring games with over 40 points and 10 assists, Vandi is continuing to make a name for himself.

Known as Goddof2k, Marcus Glenn is the small forward for Cavs Legion GC. He was drafted with the 16th pick in the 3rd round of the 2018 NBA 2K League draft and has been a critical part of the Cavs Legion GC roster ever since. Glenn is especially known for his defensive prowess on the court and his impressive performance in 2019 season 2 certainly backs it up. Goddof2k was selected for First Team All-Defense, Second Team All-NBA 2K league, and also took home the award for Defensive Player of the Year in 2019. Taking home three of the 2K league’s most coveted awards within one season certainly puts Marcus Glenn in the conversation for top players in the league. While Goddof2k has yet to have another dominant season like 2019, he still remains one of the top annual NBA 2K players.

Radiant, also known as Ethan White from Battle Creek, Michigan, is a point guard for Pistons GT. White was selected as the 14th pick in the first round of the 2018 NBA 2K League draft. For both the 2019 and 2020 expansion drafts, 76ers GC protected White with one of their two protected player spots. Radiant played at an extremely high level throughout the 2019 season 2 and earned a spot on the All-NBA 2K League Second Team as a result. In 2019, he finished top-5 in the league in both points and assists. Leading up to 2020 season 3, players that participated in the rookie survey voted Radiant as the best player in the league. He received an impressive 13 votes from his peers, with second place only receiving 3 votes. Radiant put up 26.6 points per game in 2021, which stood as the 11th best in the league. Even more impressive, he also finished fourth in the league in assists with 10.8 per game while leading his team to a 5-seed in the playoffs. If you are staying up to date with the NBA 2K League, we’re certain you will be hearing more of Radiant soon!

Who is the best NBA 2K League player?

How much money do professional NBA 2K players make?

Professional NBA 2k players certainly don’t earn as much as their real life NBA counterparts. First round draft picks receive a base salary of $35,000 per 4 month season and all other players receive $32,000 per season. Players also have opportunities to win bonuses for various tournaments, awards, championships, and endorsements. Additionally, initial moving and housing costs, medical and retirement plans, as well as food and travel costs are also paid for by the NBA 2K league, taking a lot of expenses away from the players themselves.

What are the best teams in the NBA 2K League?

The NBA 2K League is relatively new since its launch in 2018 and some team’s performances have varied over the past few seasons. The inaugural season’s championship was won by Knicks gaming and the following year the championship was taken by T-Wolves gaming.

The 2020 and 2021 titles were both secured by Wizards District Gaming, a team that many consider to be the best in recent seasons.

Who is a part of the NBA 2K players tournament?

The NBA and NBA 2K League hosted the first ever NBA 2K players tournament on April 3rd, 2020. The tournament was live streamed and consisted of 3 rounds in which NBA players faced off against one another to test their 2K skills. In the championship game, Devin Booker beat Deandre Ayton to claim the championship and secure a $100,000 donation to the charity of his choice.

All NBA players that participated in the event include: