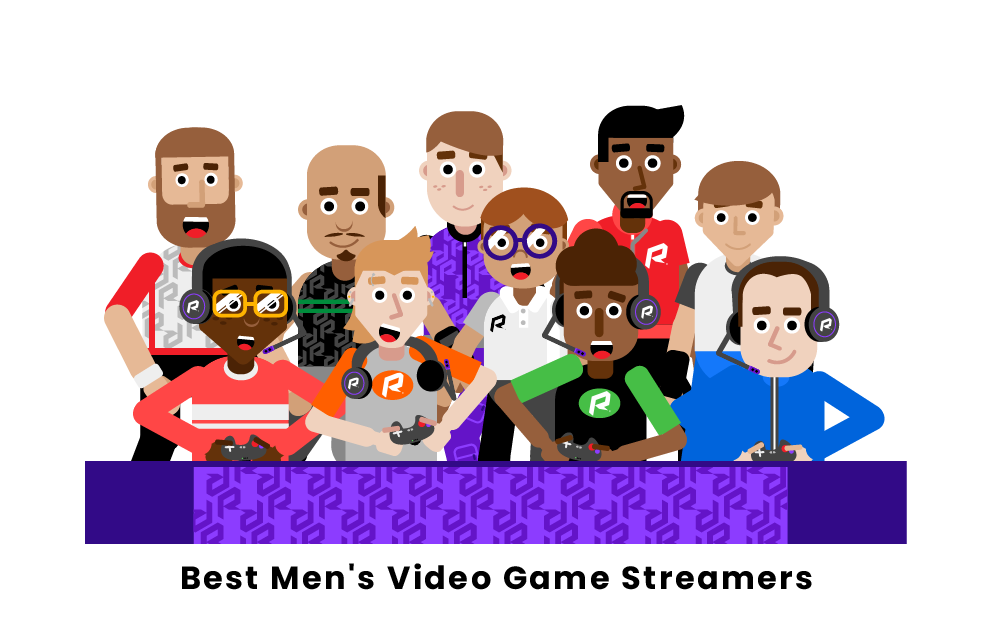 Video gaming has become a wildly popular form of entertainment, especially as technology has developed over the past few decades. And with that, video-game streaming has skyrocketed with the help of platforms like Twitch and YouTube. Fans can pay and subscribe to watch their favorite gamers play myriad games such as Fortnite and Fall Guys. Here are the top 10 most popular men’s video game streamers in the world.

Who are the Most Popular Men’s Video Game Streamers in the World?

PewDiePie, whose real name is Felix Kjellberg, is currently one of the most popular video game streamers in the world. Born in Gothenburg, Sweden, the streamer began playing video games for fun during high school. The Swedish gamer intended to major in industrial economics and technology management at Chalmers University of Technology, but left the university in 2011. PewDiePie is known for adding comedic commentary to his live-streaming events, which attract millions of fans. He was also nominated for and won first place as King of the Web in 2012. YouTube is the only platform that PewDiePie now streams on.

Tyler Blevins, who goes by the moniker Ninja in the gaming world, is a highly-ranked video game streamer. He typically streams himself playing Fortnite, but also plays H1Z1 and PUBG. At 31 years old, Ninja has broken records by having the highest number of viewers during a stream and the most hours viewed out of any other streamer in the world. He has even streamed a special Fortnite session with musical artist Drake and guest-starred in the movie Free Guy, which is about video gaming. After joining Red Bull Esports, Ninja was the first video game streamer to appear on the front cover of ESPN The Magazine in 2018. Ninja continues to break records and attract swarms of fans to his streams.

Shroud, whose real name is Michael Crzesiek, is a Toronto-born video game streamer. After becoming inspired by summit1g’s streams, Shroud joined Cloud9’s CS:GO team and then later launched his streaming career. He often plays Apex Legends, Valorant, and Call of Duty: Modern Warfare during his streams. The Canadian video game streamer often collaborates with Ninja and DrDisrespect. His videos have over half a billion views, and Shroud continues to gain new sponsorships, such as collaborating with Logitech. Similar to many video game streamers, he signed a hefty deal with Mixer before the company was shut down in 2020. Shroud continues to be an up-and-coming streamer who provides exciting gameplay and videos for followers to watch.

Tim Betar, also known as TimTheTatman, is a New York-born, now Florida-based video game streamer. His name comes from having many tattoos. In 2018, TimTheTatman gained immense popularity during the “Fortnite Boom,” similar to fellow streamer Ninja. His followers are known as the “tatmanarmy,” and he has earned over 1,000 Victory Royales in Fortnite. At the beginning of his career, TimTheTatman began streaming World of Warcraft and now mainly streams Overwatch and the Call of Duty franchise. He now solely streams on YouTube Gaming, in order to spend more time with his family, but continues to provide fans with new, thrilling content.

NICKMERCS, whose actual name is Nick Kolcheff, is considered one of the most popular Call of Duty streamers on Twitch. The streamer joined FaZe Clan and has about 5 million followers today. NICKMERCS often plays Call of Duty: Warzone, Fortnite, and Apex Legends. The 31-year-old is sponsored by brands like SCUF, Cash App, Under Armour, and Beats by Dr. Dre, which has contributed to his large net worth. NICKMERCS is perhaps most infamous for his competition with fellow streamer Ninja. The Michigan-born gamer continues to stream on Twitch despite receiving offers from other platforms. NICKMERCS is a streamer that continuously stuns gaming followers with his unique gameplay and style.

Felix Lengyel, who is better known as xQc, is a quirky video game streamer who has attracted fans from around the world. The French-Canadian streamer once was an Overwatch pro and even played in the 2017 Overwatch World Cup. Despite being known for playing Overwatch, xQc began playing more video games and gained a surplus of followers. XQc has played a shocking number of video games (about 365 in total) and enjoys playing lesser-known ones like Babysitter Bloodbath.

Nightblue3, whose real name is Rabia Yazbek, is best known for streaming League of Legends. He took a step back from playing the game in 2018, stating that the game was boring him. His net worth is about $7.5 million. Besides playing League of Legends again, the Michigan-born gamer often streams Fortnite, Call of Duty: Warzone, and PUBG. He has raised about $30,000 for charity and was once nominated for the Teen Choice Award for Choice Gamer. His videos on YouTube have received over 1 million views. Active in the gaming community since 2011, Nightblue3 continues to offer exciting streams for fans and followers on Twitch and YouTube.

Summit1g, who is also known as Jaryd Lazar, is a successful American video game streamer. He is best known for making trends and impacting the sales of games such as Sea of Thieves and GTA V RP. The streamer surpassed fellow gamer Syndicate as Twitch’s most followed gamer in 2017 but then lost to Ninja the next year. The Colorado native was once part of teams such as Mythic, Potato Streamers, Quantic Gaming, Torqued, and Exertus Sports. Summit1g first began streaming Counter Strike and The War Zone and now also streams Variety. On a monthly basis, he usually makes about $65,000 from his streams, which does not include his sponsorships.

Raúl Álvarez Genesyel, known as Auronplay, gained popularity as a streamer on YouTube. Before becoming famous as a gamer, Auronplay worked at a graphics company. Over time the Spanish streamer has accrued over 3.5 billion views of his videos. The name “Auron” from his gaming handle comes from the Final Fantasy X character, which has the same name. Auronplay is worth about $9.9 million and typically streams games like Among Us, Rust, and Cyberpunk. Besides streaming gameplay on his channel, Auronplay also records and uploads comedic reviews and prank phone calls. As a pioneer of the gaming industry, Auronplay continues to be a beloved video game streamer.

Rubius, whose real name is Rubén Doblas Gundersen, plays a spectrum of games such as Minecraft, Farcry, Fortnite, and Mario Kart. The Spanish-Norwegian gamer first started streaming his gameplay of Skyrim while offering hilarious commentary. After gaining popularity due to playing Fortnite in 2018, Rubius has become one of the most famous gamers in the world. He attracts both Spanish-speaking and English-speaking followers. Recently, Rubius exceeded his prior viewership numbers on Twitch and had about 250,000 viewers watch at once while he launched his first gameplay of the Minecraft Karmaland Series. Rubius continues to break records with his fan-favorite gaming style and fun banter.

Who is the most popular men’s video game streamer?

Currently, xQc is the most popular men’s video game streamer in the world. Fans watched about 261 million hours of xQc’s streaming during 2021 on Twitch. The French-Canadian, who left his esports career, is best known for playing Overwatch during his live sessions. The video game streamer has gained about 100 million more viewing hours compared to his record in 2020. With his unique gaming style, xQc’s popularity will continue to climb during 2022 as he continues his streaming career.

Who is the richest men’s video game streamer?

Ninja, who is worth about $50 million, is the wealthiest men’s video game streamer in the world. Although he may not be the most watched video game streamer, Ninja has climbed his way to the top by signing with Mixer. He signed a $30 million deal with the Microsoft-owned brand before it shut down in 2020. The streamer’s income also comes from sponsorships with famous brands. Ninja’s game style continues to make him a fan favorite and, with that, one of the wealthiest streamers in the world.