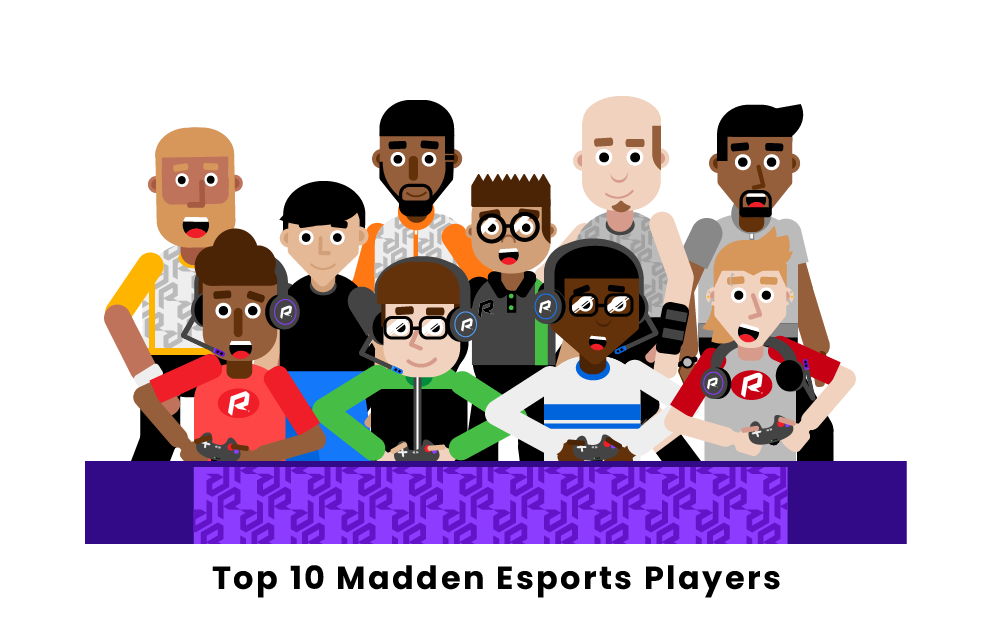 Madden is, without a doubt, the most popular NFL football game on the market, and has been a staple of the gaming community for decades. As competitive eSports have grown in popularity, certain gamers have risen to prominence, with competitive Madden players being no exception. Read on to learn more about the top ten Madden eSports players.

What are the most popular Madden eSports Players?

Eric “Problem” Wright, from West Covina, California, is the most accomplished competitive Madden player in the game’s history. Wright has been a Madden fan since 1993 and has made over $390,000 since joining the competitive Madden scene in 2005. Throughout his career, he has won 16 tournaments. His best year came in 2008m when he won every Madden major. Problem is elite at both offense and defense, but he is known for his defensive dominance. In 2016, he signed to Luminosity Gaming’s eSports team as its first Madden player.

Problem has leveraged his success into starting a company, Top Madden. His company provides playbook insight and coaching with a subscription service. While his reign of dominance may be waning as he ages, he still places well when he plays competitively and consistently streams on Twitch.

Jacob Wallack (gamer tag “Jwall”), of Pawtucket, Rhode Island, is another premier eSports athlete in the Madden world today. Jacob first entered the upper echelon of Madden gamers with a victory over tournament favorite Skimbo during the Patriots Club Championship Finals in 2019. Since then, Wallack has skyrocketed to fame, with his most notable accomplishment being his victory over Pavan Lakhat in the Madden 21 Club Championship. The title earned him the championship belt, as well as $150,000 in prize money. Ironically enough, Wallack earned this victory while representing the Lions, who haven’t won a championship since the 1957 NFL season. He is a member of the TNC Madden crew.

Outside of these main achievements, Wallack has also won the Madden 21 LevelNext Collegiate Tournament, was named the victor in Muthead League Season 8 and is a four-time Friday Night Football champion.

Drini Gjoka is one of the best upcoming stars in the competitive Madden scene. At only 18 years old, the teenager from Washington, D.C. became the youngest person to win a Madden Championship Series event when he won the Madden Challenge in 2018. After a few more great finishes throughout the next year, he won his next event at the Madden Bowl in 2019.

Drini does not subscribe to only one style of play, so he keeps his opponents guessing by running a balanced offense and defense. Drini is known for the signature bandana that he wears at events, and he is signed to the Complexity eSports team.

Raidel “Joke” Brito has been a very respected Madden player for years, but he finally broke through to the top of the game in 2020. Joke won the 2020 Madden Bowl and dedicated his championship to Taylor “Spotme” Robertson, who was shot and killed at a Madden event in 2019.

With his first championship, Joke brought some of the flaws of Madden 20 to light with his playing style. Throughout the entire tournament, Joke did not throw one pass and preferred to run the ball constantly and suffocate his opponent on defense. Since competitors built their teams based on a salary cap, he used his punter at quarterback, allowing him to juice the rest of his team and dominate the run game. Brito is a member of the XSet Madden team.

Shay Kivlen, known as “Young Kiv” in the Madden community, is a staple in the later rounds of competitive Madden tournaments. After finishing high school as a multi-sport athlete, injuries derailed his athletic career, so he turned to playing Madden competitively. Hailing from Seattle, Kivlen won his first major event in 2018 when he won the Madden Bowl. His constant air attack on offense and quick adjustments on defense make him a tough player to knock out of any tournament, and his cool demeanor intimidates his opponents as soon as the game starts.

Young Kiv has proved his character to the Madden community. In 2018, he played a game against Tampa Bay Buccaneers wide receiver Mike Evans to fund the funeral costs for the families of the two players killed at the Madden event in Jacksonville. Young Kiv is a member of 818 Madden.

Trae Horne, or “Tweez,” was not an established player in the Madden competitive scene in 2018. Rather than taking advantage of the anonymity of online games, he qualified for the 2018 Madden Classics almost exclusively by performing well while playing tournaments in person. This strategy made him come out of nowhere to compete, and the eSports athlete from Chalmette, Louisiana, immediately gained the curiosity and love of the fans because of his inconspicuous arrival.

While his opponents did not know what to expect immediately, Tweez has shown that he likes to take advantage of intricate pass defense adjustments, as he is one of the best at stopping air-raid-style offenses. Even as a popular pro Madden player, Tweez does not have much of a presence on social media or other accounts, but that does not stop him from placing highly in the tournaments in which he participates.

Michael Spoto from Staten Island, New York, has highlighted the new trend in eSports, especially in sport simulation games. In 2017, he took advantage of the change in the age requirement for the Madden Championship Series when it was changed to 16 years old. He then became the youngest person to qualify for the Madden 18 Challenge as the representative from the Indianapolis Colts.

In 2019, Spoto made his big break onto the scene when he placed second in the Madden Bowl, though the championship game was an ugly loss for him, as he lost to Drini by a score of 41-0. Despite the loss, he still took home $25,000. Spoto looked to bounce back from that loss in a rematch against Drini in 2021 at the Madden 21 Classic Xbox One Finals, but he lost once again with a score of 31-10. Nevertheless, Spoto remains one of Madden’s top players, and his age gives him ample time to figure out how to finally claim his first MCS title. While he has not signed to a competitive team yet, he does stream on Twitch.

Pavan Lakhat, who goes by “Pavan” in the gaming world, is a professional eSports gamer and streamer from Yuba City, California. He is known for his Madden prowess, as he has racked up an impressive $260,000 in career winnings from Madden tournaments alone, including a dominant Madden 19 Club Championship victory. His strategy is generally considered pass-heavy, although he certainly has the capability to run the ball and mix things up for his opponents as well.

Pavan is one of the most talented up-and-coming Madden players. He is a Raiders superfan and became the first eSports player in MCS history to win four consecutive Club Championships with the same team.

Joel Crooms-Porter, or “JoelCP,” is more popular for his mouth while playing at events than for his performances at them. During the 2018 Madden Classic, he heckled Chris “Dubby” McFarland without even playing in the tournament. He then beat the controversial Dubby, showing that the mental games he plays break down his opponents and make him even more dangerous.

That does not mean that this gamer from Washington, D.C. is not on par with his opponents on the sticks, though. His fiery attitude pairs well with his offensive-focused attack. In 2017, he signed with SK Gaming, which took great interest in his quickly growing brand and successful Twitch and YouTube channels. As long as JoelCP keeps his skills at a similar level as his trash talk, he will be both an entertaining and interesting player to watch for a while.

Reginald “Boogz” Brown is a competitor who has struggled in the last couple of years, but he still holds a spot as one of the most influential Madden players ever. Reigning from Atlanta, Georgia, Boogz has consistently shown the younger generation of Madden players that an older competitor can still dismantle his opponents on the sticks. In 2017, he qualified for each of the four major tournaments in the MCS and secured a Top 10 finish in all events.

His playstyle revolves around the Gun Bunch formation, which allows him to utilize his passing attack while also keeping his opponents on their toes with some run plays sprinkled in. On defense, he commonly blitzes his opponents for high risks and rewards. Boogz is a staple at the top of the leaderboard, but he has never cracked the number one spot in the MCS.

Hailing from Austin, Texas, Henry Leverette, who goes by “Henry,” is one of the hottest new stars on the Madden circuit. He won big in 2021, taking the Madden Bowl 21 Championship. Then, Henry made history in 2022, becoming the first Madden player in history to win consecutive titles when he defeated Wesley in the final of the Ultimate Madden Bowl 22. The victory alone earned Henry a payout of $250,000, and Henry’s total tournament winnings now exceed $450,000. Among his many effective tactics are his ability to keep an eye on his opponents’ defense and his excellent and well-practiced stick work, both of which he advises upstart Madden players to focus on.

An upstart Madden player from Oak Hill, Florida, Dwayne Wood II has played against some of the top stars on the circuit. He started playing Madden at age five, dreaming of competing at the highest level of the game, and has certainly made his aspirations a reality. Going by the tag “CleffTheGod,” Wood is known for his runner-up finish in the Madden 20 Challenge. Wood is also notable for being a former high school football player who currently coaches a high school team–the man clearly loves the game of football. On the sticks, CleffTheGod is known for his aggressive and intense playing style, a sharp contrast to his relaxed and casual personality beyond the screen. He has mastered the art of player selection, working within Madden Ultimate Team’s Salary Cap Mode to craft a hard-hitting team, and his lynchpin player is Michael Vick, one of the most powerful players in the game. In addition to his physical coaching, CleffTheGod also serves as an online Madden coach, helping players form winning teams and execute their strategies effectively.

Who is the best player in Madden of all time?

The Madden 04 version of then-Atlanta Falcons quarterback Michael Vick is commonly referred to as the best player in Madden history. Madden players love saying, “Speed Kills,” and Mike Vick in Madden 04 had enough speed for two players. His 99 speed and insane throwing stats made the Falcons a virtual juggernaut regardless of who had the controller. Vick was able to launch the ball all the way down the field, and he could also outrun every defender in front of him.

Who is the best player in Madden 22?

In Madden 22, there are five players in the “99 Club,” a group of players who carry a perfect 99 overall rating in the game. These players are Patrick Mahomes, Aaron Donald, Travis Kelce, Jalen Ramsey, and Myles Garrett. Each of these players plays a different position, making a team featuring each of these players starting extremely difficult to acquire but not impossible. As one of two members featured on the cover, alongside Tom Brady, Patrick Mahomes is the most impactful player the game has to offer.

Who is the best Madden Youtuber?

Most of the successful Madden YouTube channels today show gameplay and pack openings from the game’s most popular mode: Madden Ultimate Team (MUT.) These creators open many packs and use the best players that many casual users cannot afford. YouTuber AntoDaBoss has arguably the best balance of pack openings and exciting gameplays. His constant energy and wholesome attitude are a pleasure to watch for fans of any age, and he constantly interacts with fans in real life. In regard to the largest YouTube following, QJB leads the way with 2.15 million subscribers. He is known to post both Madden and NBA 2K videos regularly.