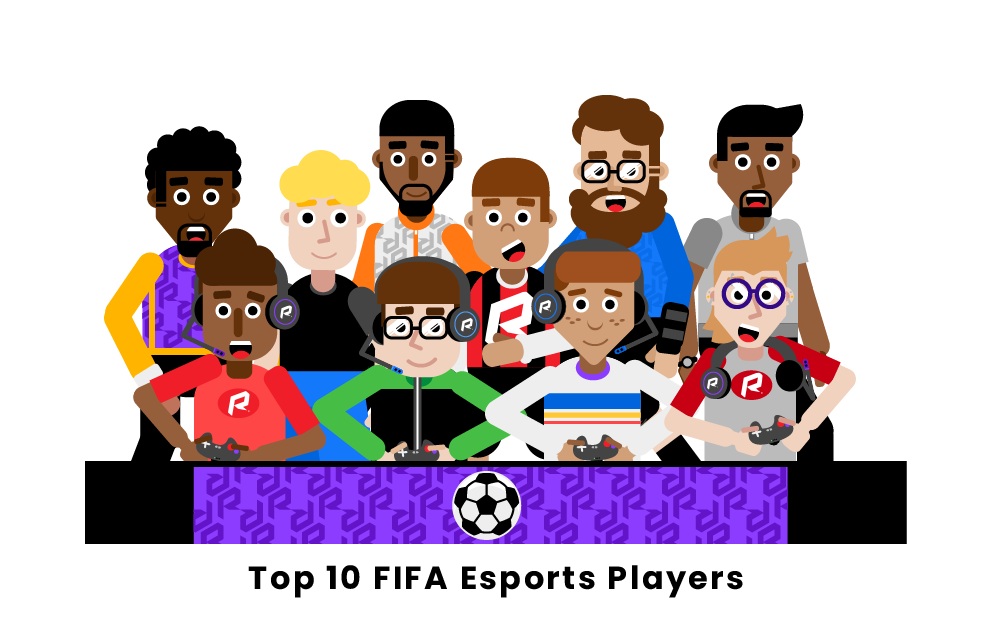 FIFA, the most popular soccer video game in the world for decades, is one of the many video games that has risen to prominence in the world of competitive esports. This rise in competitive FIFA has led to certain FIFA competitors earning celebrity status and the extreme popularity that goes with it. Read on to learn about the top ten FIFA esports players.

Who are the most popular FIFA Esports players?

Donovan Hunt is a British-born FIFA player who goes by the name of Tekkz and is a member of the esports team Fnatic. Hunt won seven online tournaments playing FIFA 19, including the 2019 ePremier League, PGL FIFA 19 Masters Bucharest, PGL FIFA 19 Cup Bucharest, the 2019 FIFA eWorld Cup, and FUT Championship Cups for the months of February, March, and November. He also won Stage 1 of the FUT Champions Cup playing FIFA 20. Hunt plays on both major video game consoles, Playstation and Xbox. FIFA 22 hasn’t yielded quite as many monumentous finishes as past years for Tekkz, however he has secured a third-place finish in eChampions League 2022, a second-place finish in FGS 22 Masters Cup, and a 1-32 finish in the FGS Team of the Year Cup. Through his dominance in competitive FIFA, Donovan Hunt has earned over $550,000 in prize money playing since FIFA 18. Hunt often streams his professional and casual games for his fans to watch and has amassed 700,000+ subscribers on YouTube.

Nicolas Villalba is an Argentinian FIFA player who goes by the gamertag nicolas99fc. He is currently the PlayStation player for Guild Esports. Villalba joined the pro scene with the arrival of FIFA 17 and has found success in every game since then. He has earned over $500,000 in prize money, which includes five tournament victories and numerous top-3 finishes. A few notable victories held by Villalba include the FIFA 19 Global Series PS4 Playoffs, the Gfinity FIFA Series 2019 January tournament, and a second-place finish in the 2022 FIFAe World Cup. Villalba has been a model of participatory and performative consistency, making him more than worthy of a place on this list.

Mossad Aldossary is a Saudi Arabian-born FIFA player who is currently a member of Team Falcons. Aldossary goes by the gamer tag of Msdossary7. Aldossary has won seven tournaments since the release of FIFA 18. Playing FIFA 18, Aldossary won the FIFA eWorld Cup and, playing FIFA 19, Aldossary won the 2019 eMBS Cup, the 2019 eSaudi Professional League, and FUT Champions Cups for the months of April and December. He also won the FIFA 20 Summer Cup Series MEA. Mossad has also had success in FIFA 21 and 22, with his highlights including first-place finishes in the FIFA 21 Global Series West Asia Playoffs and the FIFA 22 Champions Cup. Aldossary was the first FIFA player to win two World Championships in one year. Throughout his career, Aldossary has earned over $650,000 in prize money, beginning with FIFA 17. He also often streams his casual and competitive competitions and has over 500,000 subscribers on YouTube.

Umut Gültekin is a German born FIFA player who goes by the gamertag of Umut. He is a member of the eSports team RBLZ Gaming, which is the eSports division of the popular German football club RB Leipzig. Umut burst onto the scene playing FIFA 20. He placed 2nd in his second ever major tournament, Stage 3 of the FUT 20 Champions Cup. Umut continued his success by placing in the top ten in Stage 4 of the FUT 20 Champions Cup just a month later. His greatest accomplishment thus far is likely his first place finish in the 2022 FIFAe World Cup, which netted him $250,000. Umut has earned over $350,000 in prize money since joining the competitive scene with FIFA 20.

Niklas Raseck is a German born FIFA player who goes by the gamertag name of NRaseck. He plays exclusively on the Xbox console. Raseck started playing competitively with the release of FIFA 15. He won the FIFA 20 Stage 2 FUT 20 Champions Cup in November of 2019. Raseck also placed in the top 3 in two different FIFA 19 tournaments, the FIFA 19 Global Series Xbox Playoffs and the 2019 FUT Champions Cup for the month of January. He also placed in the top 10 in the 2019 FIFA eWorld Cup, coming in at number 8. Raseck shined in the FGS 22 Masters Cup, finishing in first. He has over $200,000 in prize money from playing FIFA. Raseck often streams his casual and competitive games and has 11,000+ followers on Twitch.

Olle Arbin is a Swedish-born FIFA player who is currently playing for TG.NIP on Playstation and Ninjas in Pyjamas on Xbox. Olle Arbin goes by the gamer tag Ollelito. Arbin won the FIFA 20 Stage 3 FUT 20 Champions Cup tournament in January of 2020. He also placed in the top 3 in back-to-back FIFA 20 tournaments, Futhead TNF #32, and Futhead TNF #33. Arbin has earned over $150,000 in prize money from playing since FIFA 18. Arbin often streams his casual and competitive games and has 48,000+ followers on YouTube and 32,000+ followers on Twitch.

Thomas Leese is a British-born FIFA player. Leese goes by the gamertag Tom and is a member of the eSports team Excel eSports. He joined Excel eSports from Hashtag United after Excel paid a £100,000 transfer fee in 2021. This massive monetary exchange was worthwhile in part due to the fact that Leese was one of the hottest players on FIFA 20 and 21. During the 2020 season, his crowning achievement was without a doubt his victory in the ePremier League as Watford. Leese also finished 2nd in the European Futhead TNF #28 tournament and the European Futhead TNF #33 tournament. Additionally, Leese finished 3rd in the 2020 FIFA eClub World Cup and in Stage 3 of the FUT 20 Champions cup. Tom’s dominance extended through 2021, highlighted by a first-place finish in the FIFAe Nations Cup. He had a similarly impressive performance in the FGS 22 Masters Cup, finishing in first place and securing the $15,000 grand prize. Leese has earned more than $150,000 in prize money from playing FIFA 19, FIFA 20, FIFA 21, and FIFA 22.

Flávio Brito is a Brazilian born FIFA player. Brito goes by the gamertag Fifilza and is a member of the Wolverhamton Wanderers. The Wolverhampton Wanderers are a popular English football club who play in the Barclays Premier League, and Brito plays for the club’s esports division. After only one top-three finish in nine FIFA 19 competitions, Brito has stepped it up in more recent games. Brito has three top-five finishes in FIFA 20 tournaments, including a 1st place finish in the Ultimate Quaran-team competition and a 2nd place finish in Stage 1 of the FUT 20 Champions Cup. Brito has also added a top-5 finish in the South American Futhead TNF #35 tournament. After a rocky run on FIFA 19, Brito has emerged as a dangerous opponent in recent editions of the game.

Diego Campagnani is a 24-year-old Italian-born FIFA player. Campagnani goes by the gamer tag of CRAZY FAT GAMER, or CRAZY for short. Campagnani is one of the most experienced pro FIFA players, as he won the Italian FIFA Championship of FIFA 16 and three Live League Grand Finals in a row from 2015-2017. Campagnani has not had as much success in the more recent years but has been able to remain competitive in major competitions. Campagnani placed 3rd in the Virtual LaLiga season in FIFA 19 and 2nd in Stage 2 of the FUT 20 Champions Cup in FIFA 20. Campagnani has earned $53,500 in prize money from FIFA and remains one of the top FIFA players.

Henrique Lempke is a Brazilian-born FIFA player. Lempke goes by the gamer tag Zezinho and is a member of the eSports team Dux Gaming. After struggling in the early stages of his career, Lempke went on to become one of the most dangerous FIFA players in the world. He won Stage 4 of the FUT 20 Champions Cup in February and placed in the top 3 in the Futhead TNF #31 and Futhead TNF #35. Lempke also placed second in the Futhead TNF #33 competition. Zezinho’s FIFA 22 season is highlighted by wins in the FIFA 22 Global Series LatAm North Qualifier 1 and the FIFA 22 Global Series LatAm North Qualifier 1, as well as a first place finish in the FIFAe Club World Series 2022 CA & Caribbean Playoffs.

Shaun Springett, better known by his gamer tag “Shellzz,” is a professional FIFA esports player from Great Britain. The most impactful win of his career so far was in 2021 when he won the ePremier League Finals playing for Manchester City. Prior to his win in 2021, Shellzz placed second in the 2017 FIFA Ultimate Team Championship Series Finals and third at the 2017 FIFA Ultimate Team Championship Series Season 1 Europe. Throughout his career, Shellz has earned more than $130,000 in prize money from professional FIFA esports events.

Christopher Holly, also known as “didychrislito” or just Chris, is an American professional FIFA esports player who has played the majority of his career with New York City Football Club. His two biggest wins of his career came at the 2019 eChampions League Finals and the 2021 eMLS Cup, in which he won $100,000 and $20,000, respectively. More recently, he won $20,000 by winning the FIFA 22 Global Series Playoffs. He no longer plays for New York City, but has continued his success without an affiliation with a professional esports club.

Who is the best FIFA Pro Player?

Currently, the best FIFA player in the world is Donovan Hunt. Hunt is a British-born gamer who plays for the eSports team Fnatic. Hunt has earned his ranking by dominating FIFA tournaments and competitions and continuing his success throughout later editions of the game. Although Hunt is currently the best FIFA player, the answer to this question could change if he is not able to sustain his success.

What is FIFA in esports?

FIFA is a soccer video game series by EA Sports. The first FIFA video game was released in 1994. The name FIFA comes from the federation that oversees world soccer, Federation Internationale de Football Association. Every year a new game is released with the current rosters and ratings and is named after the year it is released. FIFA is the most popular and best-selling sports video game franchise in the world.

What does FUT stand for in FIFA?

FUT is an acronym that stands for FIFA Ultimate Team. FIFA Ultimate Team is a game mode in FIFA where you create your own club and can buy and sell real players using virtual coins. You compete against the computer or other live opponents with your club. You can also earn virtual coins by winning games or purchasing them in the FIFA store. FUT is an extremely popular game mode in the FIFA video game series.

Esports is short for electronic sports, which is competitive video gaming. Gamers compete in popular video games that are played by people all over the world, like Fortnite and FIFA. The first esports tournament was at Stanford University in 1972 and has grown in popularity every year since. Current gamers are sought after for sponsorships and are compensated similarly to other tournament-based sports such as golf and tennis.