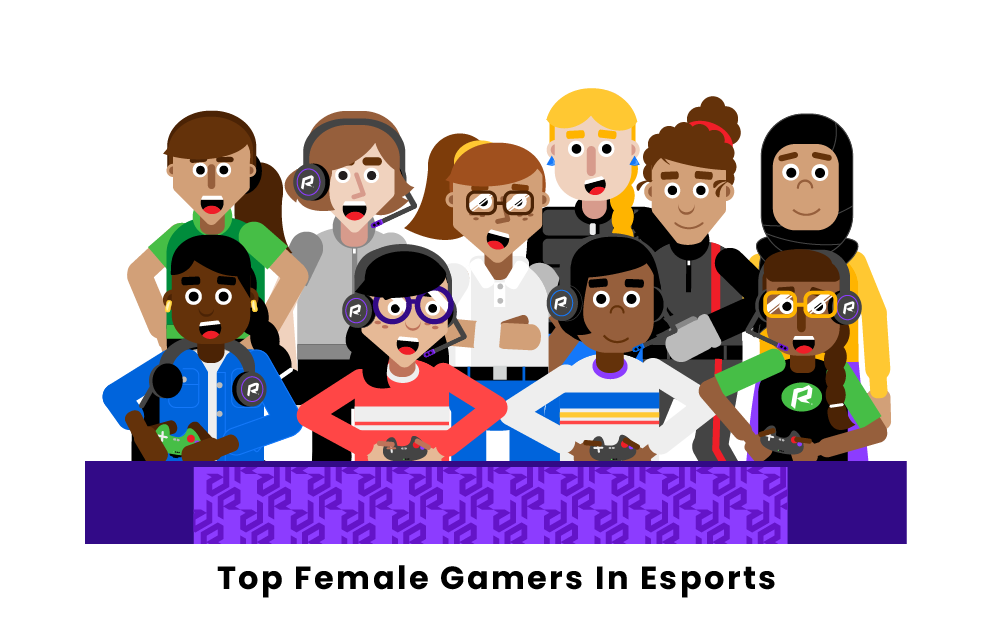 Who are the top 10 female gamers In Esports?

Sasha Hostyn is a StarCraft II gamer from Canada who plays for Brave Star Gaming. She is also known by her player ID name, Scarlett. She frequently plays using Zerglings as well as Banelings and Mutaliks. After playing in over 230 tournaments, she was able to earn over $420,000.

Hostyn began gaming in early 2011 when she was just 17 years old. She started by participating in female-only tournaments. She famously won the NESL Iron Lady competition twice in a row in 2011. Throughout the next year, she competed in more tournaments and continued to place highly. Hostyn’s breakthrough moment was when she won against many more established players in Las Vegas at the IGN ProLeague 4th Season.

She is currently the only female to be ranked in the overall top-500 gamers around the world. Sasha Hostyn is ranked in the top 400 earning players for all gamers.

Li Xiaomeng is a Hearthstone player from China. She is mostly known by her Player ID name, Liooon. She began competing in tournaments in early 2018, where she placed 2nd at the WESG Asia Pacific Finals.

Not too long after, she made history in 2019, when she was the first female player to win a BlizzCon Esports Tournament. She placed first at the Hearthstone GrandMasters Global Finals. She was 23 years old when she defeated Brian Easton (also known by his Player ID name, bloodyface) in the finals 3-0, winning $200,000. After winning, Xiaomeng made an inspirational speech encouraging women to compete in Esports. This historical achievement helped her win ESPN’s Moment of the Year in 2019.

Siobhan Bielamowicz is an Australian gamer who most famously plays the Attack on the Titan Tribute Game. Her Player ID name is HaganeNoTema. She started playing in 2014 but had a standout year in 2018. In 2018, Bielamowicz took first place in three large tournaments winning between $17,500 and $20,000 for each.

Attack on the Titan Tribute Game is a free online game that’s less popular than most other Esports games. However, Bielamowicz has been able to dominate this less crowded scene. She rose to become a top competitor and to be the second highest-earning player as of 2020.

Katherine Gunn is a US gamer who also goes by her Player ID Name, Mystik or nickname Kat. She is well-known for being an extremely talented player in multiple games. Her biggest win came when she placed first in a Halo Reach tournament called the World Cyber Gamer Ultimate Gamer in 2010. She was just 22 years old and won $100,000 for finishing in first place at the tournament.

In 2015, Gunn was named the highest-earning female gamer by the Guinness World Records. She was eventually surpassed by Sasha Hostyn, but Gunn still remains a top earning female with over $120,000 in winnings.

In addition to playing Halo Reach, Gunn has also earns money by playing Dead or Alive 4 and Call of Duty: Warzone. Gunn keeps busy outside of playing Esports. She founded her own cosplay team, Less Than 3 (LTR) and frequently streams on Twitch.

Ricki Ortiz is a pro-gamer who has been playing fighting games since 2003. She began playing arcade games in San Francisco when she was nine. After high school, Ortiz moved to New York to attend more tournaments and get more in the gaming scene.

Like the other players she is also known by her Player ID name, HelloKittyRicki. She is most known for and has the most success playing as Chun Li in the Street Fighter series. Outside of this game, she also plays Marvel vs Capcom and Capcom vs SNK. She is also highly regarded for breaking Nakoruru in the original version of Capcom vs SNK.

She has been playing with the American Esports team, Evil Geniuses, since 2010. Her most recent big win was in 2016 when she placed 2nd playing Street Fighter V in the Capcom Cup. For this tournament she won an impressive $60,000.

Tina Perez is also commonly known by her player ID name of TINARAES. She is currently playing for Gen G, an American Esports team. She joined this team to improve her status as a pro gamer as well as to help Gen G’s mission of providing more opportunities for female gamers.

Perez has made a name for herself by playing and winning on Fortnite. She had her first big win in 2019 when she placed first in the TwitchCon Fortnite Finals. For this first-place finish, she was awarded $39,000.

Perez began playing games on a console when she was younger before switching to the PC version in 2017. Her first experience with the gaming and Battle Royal world was with H1Z1, where she became a top female competitor. However, once that game lessened in popularity, she shifted her focus to Fortnite.

Rumay Wang, who also goes by her player ID name Hafu, is another top female gamer from the US. Wang has been gaming since 2008 and has had plenty of incredible accomplishments since then. Some of her biggest wins come from playing Teamfight Tactics, but she also has comparable success while playing World of Warcraft and Hearthstone.

In June of 2019, she was announced as the number one player for Teamfight Tactics while the game was in its newly released beta phase. After this, she signed with the G2 Esports team.

Also, in 2019, she placed 2nd at the Battlegrounds Brawl while playing Hearthstone. She won over $20,000 for placing in this tournament. In addition to her impressive gaming feats, Wang is also a popular Twitch streamer with over 1.3 million followers. She often streams her games of Hearthstone and League of Legends.

Marjorie Bartell is a US fighting game player. She is also known by Kasumi Chan, her player ID, which comes from the character she often uses while gaming in Dead or Alive 4. Like many of these other players, Bartell also made history by being the first female gamer to make it to the finals of the Championship Gaming Invitational. She placed second at the CGI tournament in 2006.

She went on to win her first tournament in 2007. She placed first while playing Dead or Alive 4 in the Championship Gaming Series. For this win, she was awarded $50,000. After competing in only three tournaments in the course of about a year, she had earned $55,000.

Since this win, Bartell hasn’t been very active in the Esports world. However, she was one of the first women to make a name for herself in the gaming community and paved the way for future female gamers.

Janet Rose is another very successful female Canadian gamer rising in popularity. Her Player ID name is xchocobars. Rose has been in the gaming scene since 2017. She’s competed and placed in games like Fortnite, Hearthstone, League of Legends, Chess.com, Apex Legends, and Teamfight Tactics.

One of her first big wins was in January of 2019, when she won playing League of Legends at the TwitchRivals. She’s also beat out some tough competitors while playing Hearthstone at the Battlegrounds Brawl in 2019 and while playing Fortnite throughout the various Fortnite skirmish series in 2018.

Outside of competing in tournaments, Rose is another pro-gamer with a Twitch following. Her following is mostly based on her skills with the game League of Legends. She actually started streaming before she began competing professionally. She first streamed on YouTube in 2013 and then on Twitch in 2015.

The last on our list is Sarah Harrison. She is a UK gamer who also goes by her Player ID name, Sarah Lou. Harrison has a pretty spotless record as she placed first in the only tournament she competed in. In 2008, she won the Championship Gaming Series while playing Dead or Alive 4, winning $50,000. She won this series along with her Birmingham Salvo teammates.

Harrison chose to play Dead or Alive because she found the game to be simple. This allowed her to easily train before the tournament in order to take home the big prize.

Are there a lot of female professional gamers?

Unfortunately, Esports is still very much male-dominated. Although female participation has been increasing since Esports has grown in popularity, there’s still a long way to go. Women are less likely to compete in higher rewarding games like Dota 2, League of Legends, or Call of Duty. This has caused a large pay gap. Only one of the highest-paid female players falls within the 500 highest paid overall gamers.

The Esports community is working to close this gap by encouraging more female participation.

Which female gamer has the biggest streamer following?

In 2019, a TV series was released called Streaming IRL with Pokimane to show her growing her following.

Is there an all-female Esports team?

Dignitas Female is an all-female gamer team who competes in CS:GO, or Counter Strike: Global Offensive. The team has won the 2019 and 2018 CS:GO Female division World Championship. The team was founded by Emmalee Garrido, Carolyn NoQuez, and Amanda Smith. Some other clubs such as Gen G, Counter Logic, and Singularity have also started all-female teams.

What are the biggest female-only Esports Tournaments?

There have been more female-only competitions beginning in the past few years. One of the most popular is the Intel Challenge Katowice since it has a winning prize of $25,000. In 2019, DreamHack decided to create another CS:GO Female-Only Tournament. This tournament had one of the largest winning prizes: $100,000. There are other smaller women’s only tournaments, but the prize money is not as significant when compared to other co-ed competitions.