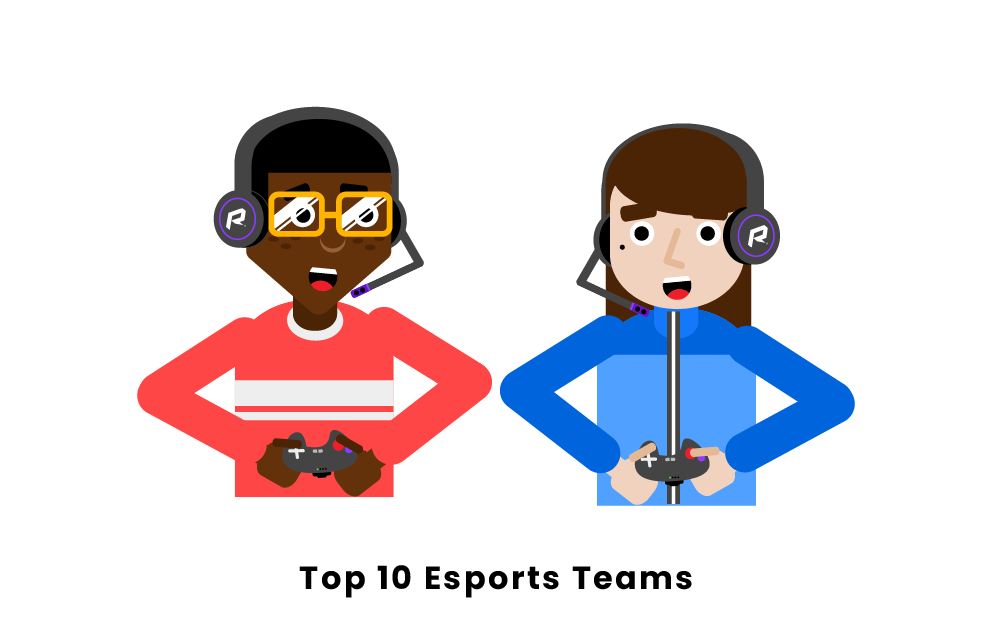 Esports have become extremely popular in the age of video game streamers, with the most popular esports athletes garnering millions of subscribers. Through this fame and fanfare, esports teams have emerged and drawn massive popularity. Read on to learn about the top ten esports teams in the world.

What Are The Top-Ranked Esports Teams?

FaZe clan is generally regarded as the top esports organization in the world because of its vast media influence and far-reaching player skill levels. The esports organization was founded in 2010 and currently houses 80+ members, many of which compete in premium tournaments year-round. The top games that members of Faze clan compete in are Counter-Strike Global Offensive (CS:GO), Call of Duty, Fortnite, and PlayerUnknown’s Battlegrounds (PUBG). For FaZe, top placements in 2019 included 1st place finishes in the GLL Grand Slam for PUBG and the BLAST Pro Series for CS:GO. FaZe also performed in the Fornite World Cup and PUBG Global Championship, despite not taking home trophies. FaZe clan teams have earned over $10 million in tournament winnings in addition to high-dollar sponsorship deals with brands G FUEL, SteelSeries, and Scuf Gaming. FaZe has successfully engrained itself into gaming culture, both competitively and casually, all of which contributes greatly to its organizational value of over $400 million. Top competitive gamers that have played for FaZe Clan have included:

In terms of tournament performance, there is certainly an argument to be made that Team Liquid houses the most talented gamers on the planet. After all, Team Liquid has gained over $42 million in winnings while competing in over 2,100 tournaments worldwide to go along with 60+ high-profile players. In 2019, Team Liquid earned first place in the following CS:GO events: ESL One Cologne, DreamHack Masters, and the ESL One Event. These wins helped Team Liquid overtake Astralis as the top CS:GO team in the world. As of late, they have also improved drastically on the mobile gaming front, taking home first place in the Clash Royale League (CRL) Finals. To top it off, Team Liquid had top finishes in both the 2019 Fortnite World Cup and the PUBG European League. Some of the top Team Liquid players that have competed in these events have included:

Next up on the list is none other than Cloud9. It is impossible to mention Cloud9’s success without first mentioning their complete and utter domination of the CS:GO competitive scene in the past decade. In 2019 alone, they took home the first place trophy at the Starladder Berlin Major and both the Valve Majors. In addition to top CS:GO players, Cloud9 also has a much improved League of Legends roster, resulting in competitive finishes at the LEC Spring Finals and LCS Playoffs. They were also semi-finalists at the Rocket League Championship, an extremely impressive feat for a team known for its first-person shooter performance. In over 840 tournaments, Cloud9 has earned nearly $12 million from tournament play, over the course of over 900 events, and only seems to be growing. Top players in Cloud9 history have included:

100 Thieves is an esports team known just as much for its content creation as it is for its competitive scene. Not only do they house dozens of players from all over the gaming world, but they also support countless other streamers that play strictly for entertainment purposes. From a competitive standpoint, 100 Thieves is best known for its League of Legends performances, and although they did not perform up to expectations in 2019, their 2018 NACLS championship appearance and countless other high-place finishes cannot be underestimated. Since their founding, they have accumulated over $4 million in tournament winnings. Overall, 100 Thieves is, without a doubt, a constantly powerful presence in the esports community. A few top players that have competed for 100 Thieves have included:

Next on the list of top esports teams is Fnatic, the Swedish-built organization that specializes in CS:GO, League of Legends, and Dota 2. Fnatic may not be the flashiest team in all of esports, but it is impossible to deny their consistent performance across all of the competitive esports communities. In 2019, they placed number one in the DreamHack Masters for CS:GO, as well as a close second place finish in multiple LEC events. The team’s success has resulted in over $18 million in tournament winnings and sponsorships with BMW and Monster. Since Fnatic plays most of their events overseas, they are a bit overlooked in the United States, but according to their stats, they certainly shouldn’t be. A few of the top players who have competed for Fnatic have included:

G2 Esports, a largely European organization, comes in at number six on this list of the top esports teams in the world. Similar to Fnatic, G2 is not as popular in the United States because of their high-profile play in strategy games like League of Legends and CS:GO as opposed to fan-friendly games like Call of Duty and Fortnite. Nevertheless, G2 turned in a number of top performances in 2019, most notably a first place finish in the Mid-Season Invitational (League of Legends) as well as a second place finish in the ESL Pro League. In over 600 tournaments, G2 teams have earned over $11 million in winnings. Top players in G2 history have included:

Natus Vincere, more commonly referred to as “NAVI,” is an esports organization based primarily in Ukraine. While they are mainly known for their dominance in CS:GO, they also compete in many other games, including DOTA 2 and PUBG. Their CS:GO team has spent over five consecutive years ranked inside the top ten teams in the world, and in 2010, they were the first team to win all Counter-Strike majors in one year. NAVI was also the first esports organization to win $1 million in a single tournament after winning The International in 2011. With all of their success, NAVI has earned over $19.9 million from tournament play in various games. A few notable players to ever play for NAVI have included:

A more popular esports team, OpTic Gaming, a Los Angeles-based team, comes in at number eight on this list of top esports teams. OpTic Gaming was once a global esports organization that competed in all of the major games, including League of Legends, CS:GO, and Call of Duty, dating back to 2006. As of now, they have scaled back their CS:GO global play while specializing more in Call of Duty, a game that is much more popular in the United States compared to overseas. Nevertheless, OpTic stays extremely competitive, as they have taken home multiple Call of Duty titles across all versions of the game. OpTic’s run of great success began in 2010 with a top-five finish at the MLG National Championship (Call of Duty: Modern Warfare) and has continued through the 2019 season with qualifying finished in the 2019 CWL Pro League. OpTic is not as well-recognized today, but they are still certainly one of the all-time best teams worldwide. Across their existence, they have accumulated over $10 million in tournament winnings. A few of the most successful players to play for OpTic have included:

OG was formed in 2015 and is based primarily across various European countries. Their sheer dominance in DOTA 2 throughout the years has allowed OG to become the second highest earning esports organization based solely on tournament results. Their $37+ million earnings comes only second to Team Liquid’s $42+ million, although they achieved this in only 140+ tournaments (as opposed to 2300+ tournaments for Liquid). OG won back-to-back The International tournaments in 2018 and 2019, and were also the first team to win four DOTA 2 majors. While almost all of their success has come from DOTA 2, they have been highly competitive in the CS:GO scene as well for many years. With their primary Red Bull sponsor, OG has become one of the most recognizable esports teams of the past few years. Notable OG players have included:

Just outside the top ten is the up-and-coming Team Vitality, who have excelled in both the extremely competitive League of Legends and CS:GO scenes, as well as the more unique Rainbow Six Siege and Rocket League scenes. Specifically, team Vitality placed in the RLCS Season 7 Rocket League Finals in addition to multiple top CS:GO finishes in various ECS Championship events. Team Vitality is a great example of a well-rounded esports team, as they field great players in so many different types of games. In an esports community that requires a high skill level, it is refreshing to see a team stretch their limits in such diverse ways. Apparently, the wide-ranging strategy has been successful, as the newly formed team has already amassed over $5.3 million in tournament winnings. Some of the top players from Team Vitality have included:

NRG is another one of those up-and-coming teams with extremely competitive players across the globe and across all different games. They play in Rocket League, CS:GO, Overwatch, and even Fortnite. It is safe to say that NRG currently houses the most unique gamers of their time. Their most recent triumph came in 2019 when they became the Overwatch League Champions, a feat not easily completed by non-blue blood teams. In addition, they also came in third in the 2019 Fortnite World Cup. NRG is not the most popular team, but they will be a large presence for years to come. Top players to compete for NRG have included:

Team SoloMid, more commonly known as “TSM,” is an esports organization based in North America. Unlike some of the other teams on this list, TSM has found success with a wide variety of video games. While Fortnite and League of Legends make up nearly half of TSM’s career earnings, they have also established themselves in Apex Legends, CS:GO, PUBG, and Rainbow Six. Even though they only have the 20th highest tournament earnings with around $10 million total, TSM was given the highest valuation of any eSports organization in 2022 at around $540 million. Some notable players to play for TSM have included:

Which esports team is most popular?

FaZe clan is undoubtedly the most popular organization in the esports community, especially in the United States. There is no other brand like FaZe, and quite simply, they are just different. Every little kid who grows up playing video games wants to be in FaZe because they are the epicenter of cool gaming culture. Not to mention, they are worth over $400 million dollars.

Which esports team is the richest?

Though it is difficult to know their exact worth, the richest esports team by far is Team SoloMid. Starting out as a small group that gained popularity at League of Legend tournaments, the esports company has experienced great financial success across many different games and platforms. Now rebranded as TSM FTX, they are worth an estimated $540 million.

Who is the highest paid esports gamer?

The highest paid gamer in the world is Tyler “Ninja” Blevins. Interestingly, Ninja is not actually a very competitive player, comparatively speaking, despite making about $30 million in his career. Most of this revenue came from sponsorship deals with Red Bull and Mixer, which have been facilitated through his social media accounts and Twitch streams. He continues to play Fortnite and Valorant at a fairly high level but has never really contended at major events.