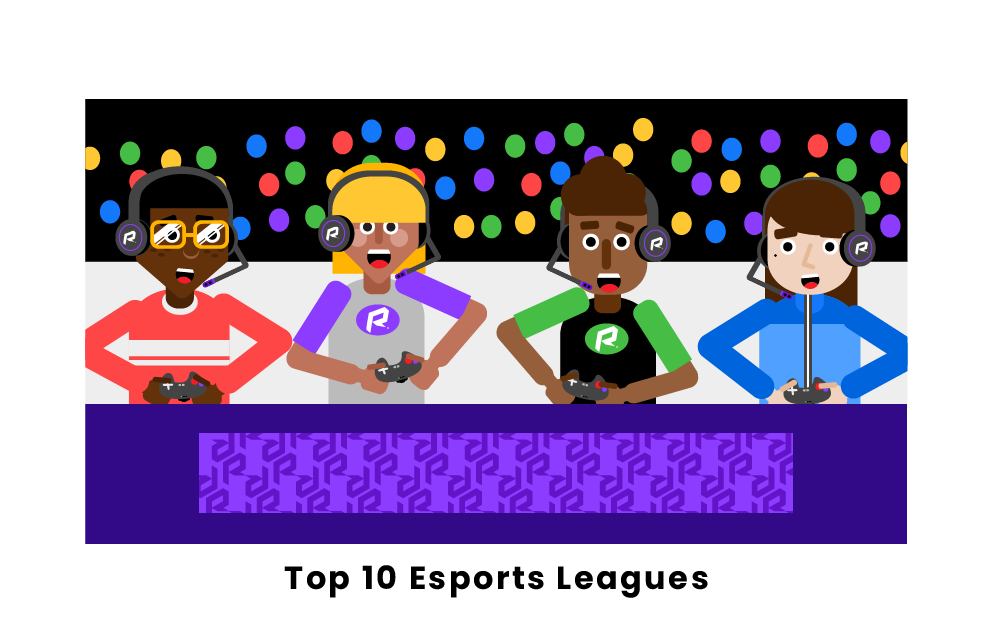 What are the most popular Esports leagues?

The Electronic Sports League (or ESL, for short) is actually a conglomerate of many different esports leagues and tournaments that are all owned and operated under the same name: ESL. For example, one of these, the ESL Pro League, includes separate competitions for Counter-Strike: Global Offensive and Rainbow Six Siege; these are referred to as ESL Pro League: CS:GO and ESL R6S, respectively.

ESL is the largest such conglomerate in the world, with four main divisions of competition:

The ESL One Series has the most money up for grabs, with over $12.5 million being awarded over the course of 60-plus tournaments.

While PC and console platform games have historically dominated the esports landscape, mobile games have been on the rise in recent years, especially in the Southeast Asian market. Chief among these mobile games is Mobile Legends, a game made by Montoon, which closely mimics the PC game League of Legends—so much so that Riot Games was actually awarded a $2.9 million lawsuit payout for plagiarism in 2019.

Still, the popularity of Mobile Legends has soared, and the Mobile Legends: Bang Bang Professional League is the biggest Mobile Legends league out there. It even won “Most Favorite Tournament of the Year'' at the EXGCON Indonesia Gaming Awards in 2019.

Mobile Legends events fail to distribute as much prize money as other esports, but the MPL ID Season 5 Tournament garnered the most sets of eyes (about 1.2 million) of any esports event in the world in 2019, surpassing the likes of League of Legends, CS:GO, and PUBG. What's most impressive is that they held two separate events with over 1 million viewers, which no other game was able to match.

Major League Gaming (MLG) is an umbrella corporation that encompasses a few different tournaments and leagues. The largest of these is the MLG Pro Circuit, which has awarded over $9.5 million in prize money over its 17-year history. It is headquartered in New York and focuses on the North American market.

The MLG Pro Circuit includes many different game titles. While historically focusing on first-person shooters and fighting games, they expanded in 2011 to include multiplayer online battle arena and real-time strategy games. MLG currently hosts tournaments with the following titles:

The League of Legends Champions Korea is the best-performing League of Legends circuit in the world. In 2021, the league paid out $336,000 in prizes. The LCK earned a total of 135.24 million hours watched and, at its peak, had 1.3 million viewers at one time. Competitions are broadcasted on multiple platforms, including Twitch, Youtube, and Afreeca TV.

ELeague is a unique esports league designed to be integrated into a television broadcast through Turner Broadcasting Systems (TBS) in the United States. Essentially, it was designed to be a TV show, helping to bridge the narrowing gap between esports and mainstream culture.

ELeague is similar to a more traditional sports league, with regular seasons leading up to playoffs, culminating in a final.

The ELeague began with a Counter Strike: Global Offensive tournament in 2016 and has since encompassed a whole host of games, including Street Fighter V, Overwatch, Call of Duty: Black Ops 4, Super Smash Bros. Ultimate, Formula E, TEKKEN 7, Dota 2, and Rocket League. They have also hosted competitions with EA Sports FIFA and NBA 2K.

ELeague has paid out over $8.6 million in prize money since its inception over the course of 18 different tournaments. This is highly impressive considering ELeague’s relatively short lifespan in the overall picture of esports.

PlayerUnkown’s Battlegrounds is one of the most popular battle royale-style games in the history of esports. The PUBG Mobile Pro League features teams from five different regions worldwide competing for spots in the Regional Championships and Global Tournaments. The five regions are as follows:

These five regions are split into smaller sub-regions, which all feature several teams competing for spots. 20 teams from each subregion compete for 16 spots in the Regional Finals. The top teams from each Regional Finals are granted a spot in the Regional Championships. The winner of those Regional Championships are granted spots in the Global Finals, and the winner of the Global Tournament is declared the league winner.

The Dota Pro Circuit (DPC) is the official tournament system for Dota 2, a popular multiplayer online battle arena (MOAB) video game. Valve, the game’s developer, runs the league. It consists of three tours that culminate in three “major” tournaments throughout the year. Six regional leagues decide qualification for the major tournaments; the regions are:

Each region is divided into two divisions of eight teams each, making for a total of 96 teams in the entire Dota Pro Circuit. At the end of each season, the 12 best teams are invited to Dota’s most prestigious tournament, The International, which is the final tournament of the DPC season. In the 2021 season, the DPC paid a total prize pool of over $9.9 million to its competitors.

While it is not the largest league within MLG, Overwatch League stands out because of its high payouts and fan engagement numbers, as well as its unique participation format and overall structure.

The Overwatch League operates very differently from most professional esports leagues. Instead of the common promotion and relegation model in many esports leagues, the Overwatch League uses a permanent set of teams from existing cities that participate in a regular season, playoffs, and championship format. This is similar to the ELeague format, although it is still unique in the overall landscape of esports. The Overwatch League also uses conferences and divisions to divide and subdivide teams, something which is usually unique to North American sports leagues.

The Rocket League Championship Series (RLCS) is a global league featuring the best Rocket League players and teams in the world. The RLCS is run by the creator of Rocket League, Psyonix. The league was founded in 2016 when the game’s popularity was surging. The prize pool has risen from $55,000 in the first iteration of the league to over $6 million in 2021 for the winners of the RLCS Finals. Teams from seven different regions compete to earn points that give them spots in mid-season tournaments and the RLCS Playoffs. The seven regions that send teams to the RLCS Finals are:

Psyonix introduced a developmental league in Season 4, the Rocket League Rivals Series (RLRS), in which the top two teams in the league play the bottom two teams in the RLCS to determine whether teams are promoted or relegated.

Call of Duty is one of the most famous video game franchises of all time. The Call of Duty League (CDL) is a professional esports organization that features 12 city-based teams that compete for spots in the playoffs and, eventually, for the league championship. Each team plays every other team throughout the season. The teams currently competing in the CDL are:

Matches are played in one of three game modes: Search and Destroy, Hardpoint, and Control. Teams play in qualifying matches leading up to four double-elimination majors. The eight teams with the most points at the end of the regular season will qualify for the CDL Playoffs.

The NBA 2K League is an esports league that is actually backed by the NBA. The league features 24 different franchises, many of which correspond with NBA franchises, such as the 76ers GC, Knicks Gaming, and Lakers Gaming. The only two teams not affiliated and comarketed with NBA franchises are the Gen.G Tigers of Shanghai and the DUX Infinitos. The league functions similarly to the NBA, featuring five-versus-five gameplay with esport athletes’ unique characters, as opposed to the avatars based on NBA players typically found in NBA 2K. The entire group of teams featured in the NBA 2K league features:

The league was founded in 2018 with 17 teams; however, it has since expanded into the 24-team league seen today.

What is the most popular esport?

While this is difficult to measure, League of Legends is generally considered the most popular esports title. Other games that might be able to make this claim include Dota 2, PUBG, League of Legends, or CS:GO. League of Legends competitions represented four of the world’s top 10 most-watched esports tournaments last year. Only Dota 2, CS:GO, and Fortnite have awarded more total prize money (all-time) than League of Legends. StarCraft II rounds out the top five.

What is the biggest esports league?

The Electronic Sports League (ESL) is the largest third-party esports league in the world. Other large third-party leagues include Major League Gaming and ELeague. Most esports leagues operate on an in-house system, where the game developers and publishers, who already own the rights to their own games, keep the rights and host competitions and events themselves. The ESL has been at the forefront of two crucial parts of growing in esports: broadcasting and live events. It partners with video game companies to use their games and broadcast competitions to a massive audience.

What esports game makes the most money?

Dota 2 is the esports game title with the highest total prizes, with over $227 million won by esports competitors. This is more than double the second-closest title, CS:GO, which has barely eclipsed the $100 million mark. The other top-grossing earners are Fortnite (about $97 million), League of Legends (about $79 million), and StarCraft II (about $34 million). PUBG, Hearthstone, Overwatch, Heroes of the Storm, and Arena of Valor round out the top ten.