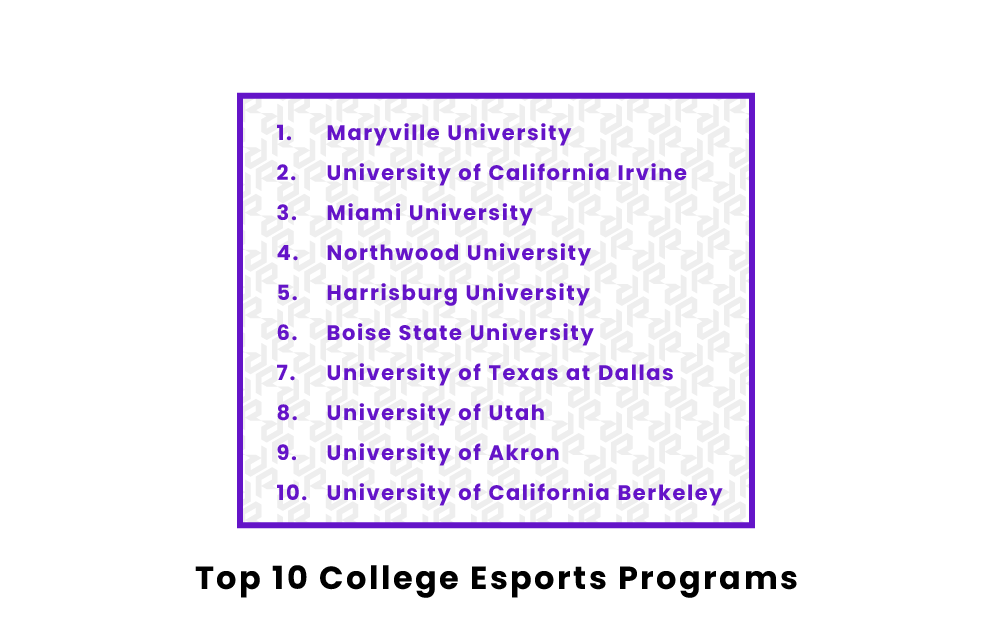 Esports refers to electronic sports or competitive gaming. Since the inaugural video game competition at Stanford University, esports has gained greater traction in recent years, allowing some students to acquire scholarships from institutions to compete in eSports events. The most popular Esports programs are listed below.

What are the most popular college esports programs in the world?

Maryville University’s esports program was formed in 2015-2016 and is a staple in the college esports community. They excel at League of Legends and Overwatch and have won four national championships and 23 major tournament championships. Maryville also offers some esports students a $2,000 gaming scholarship. There are two divisions within the school’s program: the Varsity Program and the Community Club. The Varsity Program is for their League of Legends and Overwatch teams, while the Community Club is for a friendlier environment for games such as CS:GO, Hearthstone, Rainbow Six Siege, and Rocket League.

As the first public university to create an esports program, UCI has always taken the initiative to create a better environment for the esports community. In fact, UCI gave scholarships to their initial League of Legends teams because they firmly believed in the gaming industry. This paid off with them winning the 2018 College League of Legends Championship. The gaming scholarships are currently up to $6,000 for their varsity teams and $3,000 for their junior varsity teams, including both their League of Legends and Overwatch teams. The creation of their team was inevitable, with 72% of students identifying as gamers and 89% supporting the creation of the esports team.

Miami University was ahead of everyone else, being the first Division I varsity esports program. After their creation, Miami went on to win the 2017 National Associate Collegiate Esports (NACE) Overwatch Championship. Afterward, they triumphed in two statewide Overwatch and League of Legends competitions. They also provide three eSports summer camps: Games Camp, Esports Camp, and Girls in Games Camp. At $1,100 for the Games and Esports Camp and $400 for Girls in Games Camp, the participants can learn new skills and train like collegiate players. They work with the team to improve all the skills needed in esports. Miami is one of the biggest advocates for esports and continues influencing the community.

The Northwood University Blue esports program was created in December 2018, and as evidenced by their world championship, five national championships, thirty-one conference/league championships, and twenty tournament championships, they are no stranger to winning. The Collegiate eSports Program at Northwood has a unique goal for its players. Alongside giving them the opportunity to play competitively, they also have the goal of helping them obtain a business degree, integrating esports with business. Northwood offers scholarships and a plethora of games to play, including League of Legends, Overwatch, Rocket League, Call of Duty, and more. Northwood has achieved success in many different games and continues to broaden its horizon.

Harrisburg University was one of the first schools to offer full-tuition scholarships to its varsity esports players in games such as League of Legends, Overwatch, and Hearthstone. This helped them with winning three national titles in Overwatch in 2019, 2020, and 2022, losing just narrowly in the semi-finals in 2021. The Harrisburg University Storm also hosts a $50,000 tournament called the HUE Invitational tournament, where 64 varsity esports teams compete. Furthermore, the school is also one of the only universities to offer a degree in Esports Management. Harrisburg helps the esports scene on all fronts, from hosting events to having an esports degree.

Created back in 2017, the Boise State University Broncos have had great success throughout different games, including two national championships in Madden and one in Overwatch. Additionally, they are home to Dr. Chris Haskell, the Coach of the Year for the 2019-20 season, 2020 NACE Program Director of the Year, and 2021 Collegiate Ambassador. The Broncos also provide opportunities to high school students with their free-week long summer camp, EsportsU. This gives gamers the chance to work with college and professional players to gain experience with collegiate eSports. Boise State truly believes in the future of esports and provides gamers a multitude of opportunities to show their talents.

7. University of Texas at Dallas

UT Dallas’s esports program was founded in 2018. They have gone on to win two Super Smash Bros. Ultimate national titles and are ranked as some of the top teams in both Overwatch and Rocket League. They’ve also partnered up with Discord, an instant messaging social platform millions of gamers use. Their varsity team members are considered student-athletes, which means they also get the benefits such as an athletic scholarship, paid travel expenses, a student-athlete backpack, etc. To add, UT Dallas also has a summer camp, helping their gaming community in all sorts of ways.

The University of Utah’s esports program began in 2017 and was the first of the Power Five athletic conference members to create one. Utah’s esports team competes in League of Legends, Overwatch, Hearthstone, and Rocket League. They are also looking for more games to join. In Overwatch, Utah made a championship appearance, making it all the way to the finals before falling to Harrisburg University. The university’s Entertainment Arts and Engineering program sponsors the esports program, showing the school’s commitment to esports. The University of Utah cares a lot about esports, and with the help of their Entertainment Arts and Engineering program, it's not just about playing games but about helping students build the future of esports.

The University of Akron started its esports program in 2018, and since then, have put in a lot of time and effort into improving the program. To start, they’ve opened up three facilities dedicated to gaming with a combined space of 5,200 square feet, the largest esports venue of any university in the world. With the help of all that space, the Zips have won four Collegiate Rocket League National Championships. One of these championship victories also involved a 20-0 season and a 5-0 win in the finals. The Zips also excel at other games, such as Rainbow Six Siege, where they won a national championship.

The University of California Berkeley succeeds in multiple games. They’ve won national championships in Overwatch, Starcraft II, and Dota 2. They also have a dozen teams from games that range from Fortnite to Counter Strike: Global Offensive, and that doesn’t even include their clubs, which would add even more games. Berkeley is all for inclusion and diversity, as evidenced by their Women in Gaming club, which helps women feel confident in gaming and inspires them to seek esports careers.

What is the best college esports program?

The best esports program is at Maryville University, where players excel at many different games and have won multiple national championships in League of Legends and Overwatch. They are relatively small compared to many of the other schools on the list, but that hasn’t stopped them from continuing to win championships. They have a multitude of opportunities for esports players and management for both competitive and academic purposes.

What is the best school for gamers?

The best school for gamers is the University of California Irvine. Although UCI is great on the competitive esports scene, they are just as good for casual gamers, with most of the student body composed of gamers. They are a diverse school and are continuously growing. With its large and supportive gaming community, UCI would be the ideal school for gamers to attend college and meet other gamers while also having a strong esports team.