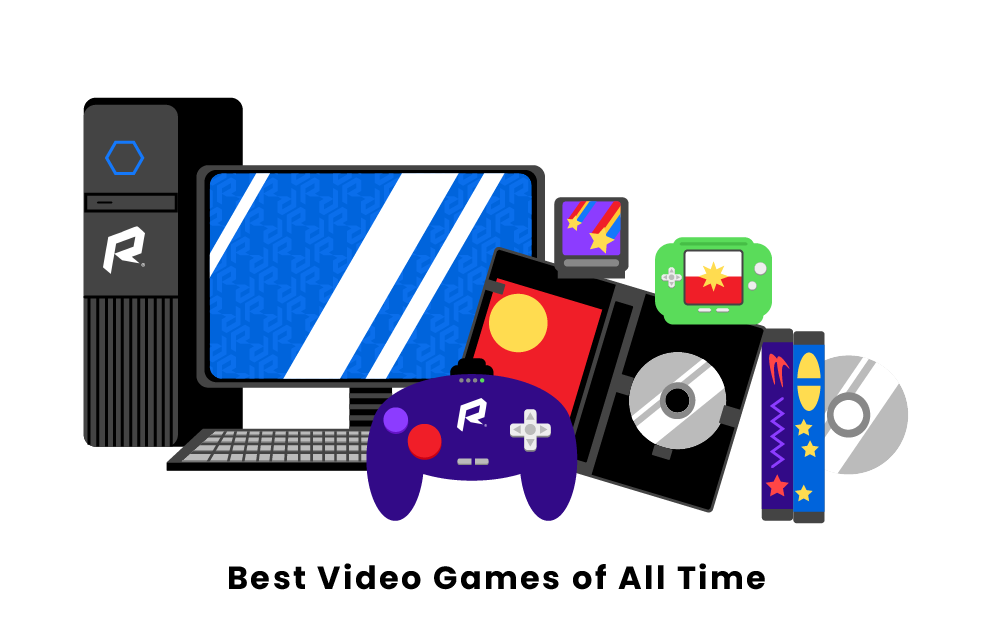 Curating a list of the greatest video games of all time is no easy task, and nearly every attempt will leave some people in disagreement. Over the decades, video games have been one of the most popular hobbies for people around the world. Games from all platforms have managed to gather significant followings of passionate fans and players.

Who are the best video games of all time?

Grand Theft Auto V earns the top spot on the list of best video games of all time for a variety of reasons. The game, which was initially released in 2013 by RockStar Games, is the latest in a line of successful Grand Theft Auto titles. This version allows players to switch between three dynamic characters and explore a world that provides an unmatched level of visual detail. GTA V stands out for its incredible success, with over 100 million copies sold and over $6 billion in revenue. Those numbers separate them from the pack and reinforce the quality of the game. Another impressive element of GTA V is its longevity. By adding the Grand Theft Auto Online feature to the game, RockStar has given players the ability to continue to enjoy the game for hours after they beat the offline story mode. For these reasons, critics and fans agree GTA V is an all-time great.

Mass Effect 2 has earned the second spot on the list of greatest games of all time. The second game in a trilogy set in an immersive universe is one of BioWare’s best-selling games. It sold over 2 million copies in the first two weeks after its release and later became part of a successful remastered collection of the entire trilogy. The story, which was good enough to earn a Business Insider critic score of 96/100 and user score of 8.9/10, follows a human soldier in a futuristic universe in which he must explore not only the galaxy but also new relationships with incredibly detailed characters. Perhaps the feature that separates Mass Effect 2 from the rest of the pack is its detailed personalization. Every choice you make in the game will impact the final outcome allowing you to choose your own adventure in a fun way.

3. The Legend of Zelda: Ocarina of Time

Third on the list of greatest games of all time is The Legend of Zelda: Ocarina of Time. This rendition of the classic series was first released on the Nintendo 64 in 1998, and at that time, it served to redefine the action-adventure genre. It became one of the most critically acclaimed games ever because it was able to build on the popular lore of star character Link by adding unique elements of 3D combat and exploration. The game was so popular that in 2011, it earned a remaster on the Nintendo 3DS system, where the classic game was able to provide nostalgic fun for some and bring the adventure to others for the first time. In the end, The Legend of Zelda: Ocarina of Time was able to combine puzzle solving, combat, exploration, and a great story together in a way that no other game had previously done.

Portal 2 is one of the most unique games to hit the top ten all-time list. It served as the sequel to an award-winning game and therefore had high expectations. In the minds of most critics and fans, it surpassed those expectations on the way to becoming one of the most popular games ever. Created by Valve, Portal 2 is a puzzle game that combines a dark story with well-timed humor to foster a fun and unique play environment. Some of the other things that helped Portal 2 stand out are the fact it had a co-op campaign, customizable level builder, and cross-platform sharing system. While the co-op campaign was not a new concept, doing it well is still worthy of recognition, and the other two features were simply ahead of their time. For those reasons, Portal 2 took home many awards, including the AP Game of the Year in 2011

The Last of Us brought a fresh twist to the zombie apocalypse genre with a heart-wrenching story. Developed by Naughty Dog studios and by Sony Computer Entertainment, The Last of Us was initially released on the Playstation 3 in the summer of 2013 but was quickly remastered for the Playstation 4 the following year. The game combined artful writing, sound, music, and voice acting to allow players to really be immersed in the post-apocalyptic world. The main characters Joel and Ellie, voiced by Troy Baker and Ashley Johnson, respectively, won the Spike VGX best voice actor and actress awards in 2013 for their performances. Joel and Ellie are forced to explore this dark world together, developing a father-daughter type relationship that allows players to become emotionally attached in a unique way because of how wonderfully the story is crafted. This combination of movie-like story and fun gameplay makes The Last Of Us an easy choice for the top 10 games of all time.

6. The Legend of Zelda: Breath of the Wild

The Legend of Zelda: Breath of the Wild earned a spot on the top ten games of all time by ramping up an already historically great series of games to the next level. This rendition in the classic Legend of Zelda universe took players into an entirely new experience by providing a fully customizable open world. Players do not have to follow the story in any particular order; instead, they have the ability to explore the massive open world and complete a wide variety of story arcs and side quests at their leisure. The game was designed in large part by Japanese video game designer Eiji Aonuma and his unique approach to the classic Hyrule universe was built in such incredible detail, players can spend hours cooking meals and collecting outfits or fighting monsters if they prefer. For these reasons, the game won 189 unique gaming awards in 2017.

Red Dead Redemption 2, which was developed and published by RockStar Games, took the open-world role-playing game style to the next level. The uncompromising detail of the game brings players into the wild west like no other game has before. Visually, the game is stunning, particularly for a game with such a large map. Much like other open-world role-playing games of its generation, Red Dead allows players to explore the world at their own pace and even forces players to spend more time exploring the map to experience the beauty and detail built into the world. Hours of side quests and an award-winning main storyline make Red Dead Redemption 2 a game that a player can lose themselves in. For those reasons, it earns a spot on the top 10 games of all time.

Disco Elysium is unique in the top ten games of all time because it is the only one to come from an independent game developer in ZA/UM. The studio earned recognition for Disco Elysium as the game won the Game Awards for Fresh Indie Game and Best Independent game in 2019. Disco Elysium is a unique game that brings players into a role-playing world as detectives trying to solve a potential murder. While the game immerses the players in a dark world of crime, it brings a unique sense of humor to its detailed plot that allows players to get sucked into the game. The plot and interesting cast of characters, which must be interviewed, earned Disco Elysium the Gaming Awards Best Narrative in 2019. Overall, Disco Elysium earns a spot on the top ten games of all time for being one of the best Indie games ever and for bringing players into a detailed world in a fun and immersive way.

One of the most popular games in a long line of Super Mario Bros. titles, Super Mario World earns a spot on the top ten games of all time list for its creativity and ingenuity. The development of the now-famous character Yoshi was a technical masterpiece at the time, which had been nearly impossible until the release of the latest Nintendo system in the early 90s. While the game follows in the footsteps of previous Super Mario games in having a straightforward 2D gameplay style, it offers more in the way of hidden paths and unique travel options that separate it from the more linear games in the series. No list of top 10 video games of all time could be complete without a Super Mario title, and Super Mario World certainly stands out as one most popular and critically acclaimed in the series.

Super Mario 64 served as the first-ever 3D installment of the Super Mario Bros. series, and in many ways, it revolutionized 3D games. The fact that Super Mario 64, which was released in 1996, was able to overcome the technical burdens of its time and create a 3D game that lived up to the expectations of its 2D predecessors makes it well worthy of a spot on the list of greatest video games of all time. To this day, critics and fans admit that Super Mario 64 remains a bold and enjoyable game despite its age. The game was popular enough to earn a port on the Nintendo Wii and was one of the best-selling games on that platform as well. Overall, Super Mario 64 introduced new moves and playstyles to the already popular series and helped define the next generation of Mario classics.

What is the best Video Game of all time?

Grand Theft Auto V earns the spot as the best Video Game of all time. The open-world role-playing game has become one of the top-selling games of all time, with well over 100 million copies sold across various platforms. It has become the most profitable entertainment release of all time, with over $6 billion in revenue. The game combines intense action, endless play options, and incredible detail to earn the top spot.

Which video game has sold the most copies ever?

The video game with the most copies ever sold is Tetris. The game was initially released in 1984 and has since sold over 500 million copies. The vast majority of these sales have been paid mobile downloads, with over 425 million such sales. However, Tetris has had success on over 50 platforms, including over 70 million in physical copies sold on systems such as the Game Boy, which Tetris helped to launch.

Pages Related to Top 10 Best Video Games of All Time