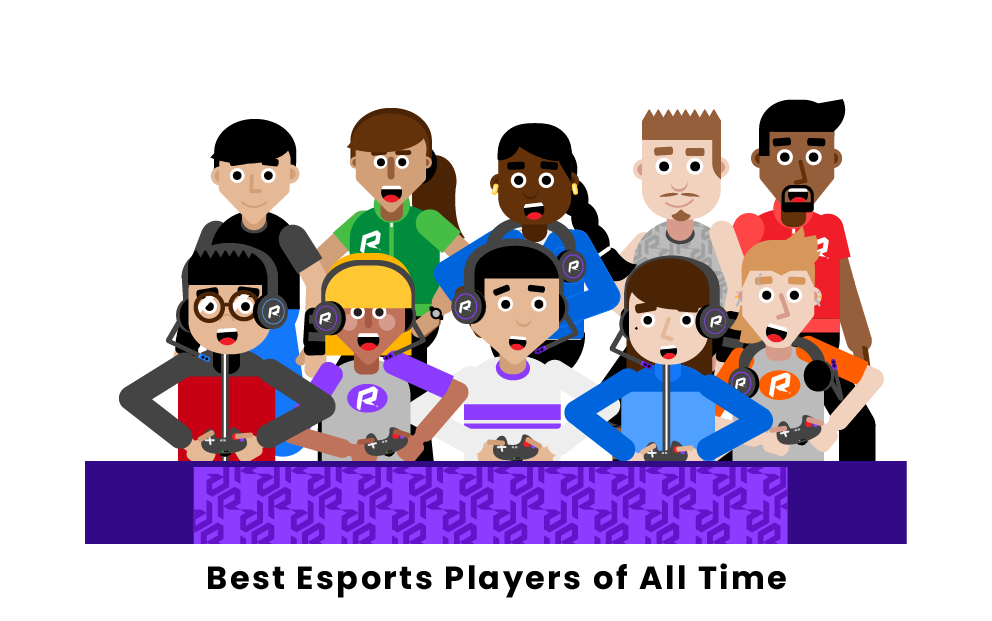 Esports is a domain that covers a variety of competitive video games, many of which have been popular for years. For that reason, it is difficult to directly compare players that did not compete in the same game or in the same era. However, this list will provide an assessment of the top ten esports players of all time.

Who are the best esports players of all time?

N0tail earns the spot as the best esports player of all time and is also known as the best DOTA 2 player of all time. Originally from Denmark, he became the highest-earning esports player of all time by winning the DOTA 2 The International tournament in back-to-back years. He is one of only a few people to ever accomplish that feat, along with his teammates, and it helped him surpass the $7 million mark in all-time earnings. His skill and fame helped him co-create the OG Esports, which has gone on to achieve great things even after N0tail retired from the sport.

Faker earned consideration for the top spot of all-time esports players, and many would argue his case. He is one of the most famous esports players of all time for his dominance as perhaps the greatest League of Legends player of all time. Faker is one of only two people to have won the League of Legends World Championship three times. This speaks to his elite skill and the incredible competition in that game. Overall, Faker added to his career accolades by winning the All-Star Paris 2014, the Mid-Season Invitations in 2016 & 2017, and the IEM World Championship in 2015. This impressive list of titles helped him earn over $1.2 million in his career and earn the second spot of all-time esports players.

Flash is easily one of the greatest Starcraft players of all time. He holds an incredible 70% win rate against the world’s top competition, and this was during a time when Starcraft was the most highly competitive gaming scene on the planet. What’s more, Flash shares the record for the longest time ranked as the #1 Starcraft player in the world, earning more than $400,000 in tournament winnings during that time. When Starcraft: Brood War was released, he emerged from retirement to win three Afreeca Starleague titles in three years and cement his place as one of the greatest esports players ever.

Christopher “GeT_RiGhT” Alesund joined the ranks of top Swedish gamers as a teenager when he made his debut as an elite Counter-Strike player. He teamed up with fellow all-timer f0rest and even surpassed the greatness of his teammate on the Fnatic eSports team. GeT_RiGhT changed the game of Counter-Strike by pioneering a new strategy known as lurking, which helped him to jump on every mistake made by opponents. His dominance helped the team win ten events in just his first year as a professional, and when CS:GO was released, he again asserted his dominance on the sport.

Daigo became one of the first true international esports stars in the late 90s. He earned his fame through unmatched prowess in 2D fighting games such as Street Fighter. After first becoming obsessed with these styles of games as a youth, Daigo eventually earned the nickname “The Beast” by winning so many competitions, including Japan’s Street Fighter national champion in 1997. Daigo went on to become the holder of "The most successful player in major tournaments of Street Fighter" Guinness World Record, and his fame led to the creation of a Manga series called Daigo the Beast: Umehara Fighting Gamers.

If not for the incredible talent of fellow countrymen GeT_RiGhT, f0rest would likely be known as the greatest Counter-Strike player of all time. F0rest, GeT_RiGhT, and the rest of the Fnatic esports team dominated the world in Counter-Strike, and eventually, f0rest and GeT_RiGhT teamed up in the sequel game CS:GO to become the world’s best combo in that title as well. Overall, f0rest and the legendary 2009 team he led became the highest-earning in Counter-Strike history, and in his career, f0rest compiled over 50 Counter-Strike gold medals. These impressive feats certainly earn him a spot amongst the ten greatest esports players of all time.

In many ways, the South Korean Starcraft scene is what paved the way for future esports to gain the notoriety that they have and for players to earn the quality of life they now can. One of the players that built the Starcraft scene into a legacy league was BoxeR, one of the world’s first great esports legends. During his career, BoxeR won 548 times and could have won more if not for health issues. His success in the game started with his first major victory in 1999 and ultimately, his career financial success set the stage for the rise of even bigger esports. His charisma as a star player helped complement his in-game accomplishments and become a true star. In that way, he is compared to Michael Jordan for his ability to impact the growth of the sport with more than just his skill.

As the game of Starcraft was giving way to other growing esports titles, Jaedong was doing his best to keep the game entertaining and mainstream with his incredible play. He had one of the most dominant four-year stretches between 2007 to 2011, winning two MBCGame Starleagues, three OnGameNet Starleagues, and three World Cyber Games titles. His intense rivalry with fellow top all-time talent Flash helped keep Starcraft relevant, always competing for championships across the world and in South Korea. Overall, Jaedong’s impact on Starcraft and the entire esports community earns him a spot among the ten greatest esports players of all time.

Many of the world’s greatest esports talents have come from Asia and Europe, where games have developed more passionate fan bases, and the profession is more widely accepted. However, one American earned a spot on the list of greatest esports athletes of all time. Jonathan “Fatal1ty” Wendel is perhaps the most important American esports athlete of all time because he was one of the first-ever celebrity esports players in America. He excelled in the game Quake, starting with multiple tournament wins in the US before an epic tournament in Sweden, in which he won 18 straight games. These wins helped him become one of the top earners to ever play the title in large part due to his incredible work ethic.

Rounding out the list of the ten greatest esports players of all time is Jang “Moon” Jae-Ho, the greatest Warcraft 3 player of all time. Moon dominated the South Korean Warcraft 3 competition and quickly became an international star. In 2009, he signed a record-breaking $500,000 contract with the Korean team WeMade FOX, which goes to show how valuable not only his play was but also his star power. Overall, Moon achieved such unbelievable levels of success that he became known as the “5th race” in a game where players could pick from only four races to play as.

Who is the best esports player ever?

The greatest esports player of all time is N0tail. Johan Sundstein is from Denmark, and he made his name as not only the greatest DOTA 2 player of all time but also as one of the leaders of the OG gaming team. N0tail is the highest career earner of any esports player ever and one of a select few to ever win the famous DOTA 2 International tournament in back-to-back years.

What country is best in esports?

South Korea is the best country in esports as of 2022. As a nation, South Korea has embraced esports for much longer than most countries, and it shows in how many star players come from South Korea across a number of games. The South Korean government supports esports players as much as any country in the world by backing academies for future esports stars. Players such as Faker, Bang, and Maru have earned millions and represented their nation well.

Pages Related to Top 10 Best Esports Players of All Time