How Much Money Does A Video Game Streamer Make? 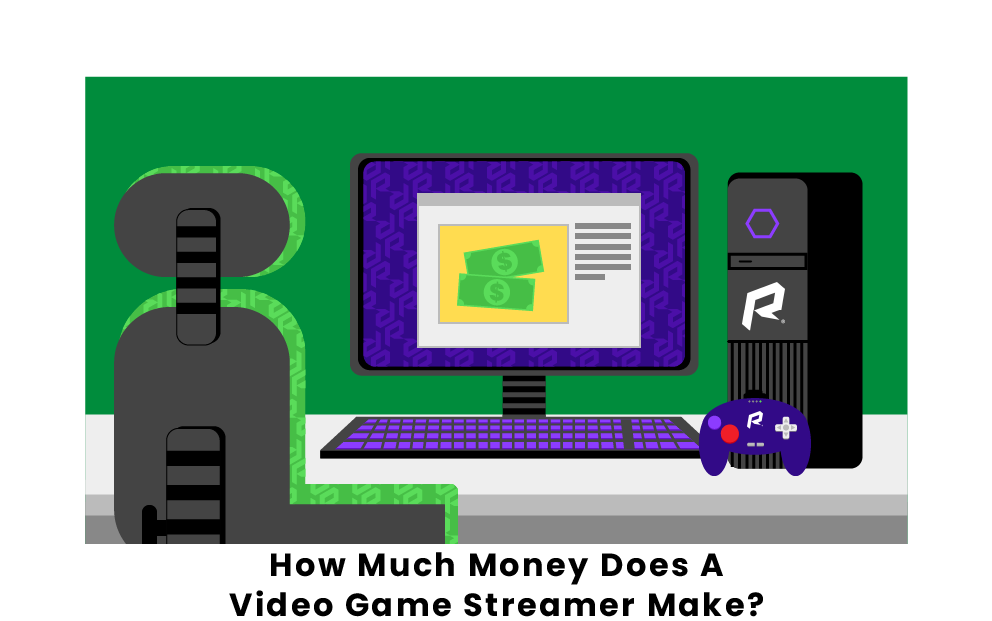 As the popularity of video game streaming continues to surge, so too do monetization opportunities. Listed below are various ways video game streamers make money and how much, on average, each avenue affords them.

The first way video game streamers make money is by posting their gameplay on YouTube. These streamers make this money based on advertisements and views on their videos. According to Business Insider, YouTube pays the official publisher of the content a little over half the revenue from whatever is paid by the agreed advertisers. The rate of this payout generally ranges from $0.10 to $0.30 per ad view.

As with any form of content creation, the revenue produced through streaming varies based on the popularity of the content being viewed. For example, if a lower-tier/novice streamer gets 500 ad views on one of their videos, it would likely result in an ad profit of $50 to $150 per video. However, on the other end of the spectrum, higher-tier creators with much larger audiences may get as many as 50,000 or more ad views from a single piece of content. That translates to earnings of anywhere between $5,000 to $15,000 per video. The very highest tier video game streamers, such as Markiplier and Jacksepticeye, are reported to make as much as $1,000 per minute of their videos.

The second way that video game streamers make money is through Twitch. Though there are many similarities with streaming on YouTube, Twitch offers a more complicated and varied revenue system for gaming streamers. To make money on the platform, a streamer must meet the qualifications of either their Affiliate program or their Partner program. Each tier has different monetization opportunities, with the Partner program being the more exclusive of the two tiers.

Twitch Partner Program: To be a Twitch Partner, you must have at least 50 followers, you must stream on 12 different days in a given month, your average viewership must include at least 75 concurrent viewers, and you must have streamed for at least 25 hours in the last 30 days. As a Twitch Partner, you get access to ad revenue, your VODs are stored for 60 days, you get up to 50 custom emotes, you get animated bit badges, you receive a priority level of customer support, you have full access to your audience, and you are afforded a 15-minute stream delay.

The income of Twitch streamers comes from ad revenue, subscriptions, sponsorships, bits, and donations. The revenue directly made from subscriptions equates to 50 percent of any subs purchased on their channel, and their cost comes in packets of either $4.99. $9.99, or $24.99 a month. Another unique feature of streaming on Twitch is bits. Bits are a currency on Twitch purchased by subscribers and given during streams to cheer and boost a subscriber’s favorite players/creators. For every bit used on their channel, a publisher gets $0.01. An audience can also donate outside of streams directly to a stream at any point if the publisher has set up a means of doing so.

Due to how small and incremental these forms of revenue are, the amount of money one can make from streaming on Twitch heavily depends on the built-up fanbase of each particular streamer. For example, a streamer with as few as 5-10 average viewers would earn about $50-$200 per month, whereas a streamer with 100 average viewers would earn about $1000-$1500 per month. There are, of course, highly popular exceptions, with the highest-tiered Twitch streamers, such as Ninja or PewDiePie, making around $20 million per year.

Like any celebrity, the more popular video game streamers can make a lot of money through endorsements and sponsorships by interested brands. Companies pay streamers to promote their brand, and the most visible and profitable way is for streamers to play the games of specific brands. These kinds of streams are called sponsored streams. The rate that streams are paid out for sponsored streams is based on the popularity of the specific streamer. These generally range from $0.01 to $1 per hour. Thus, getting up to 5,000 viewers equates to $50 to $5,000 per hour of gameplay. As with other video game streaming revenues, there are certain high-profile celebrities who are the exception to these rules and can thus be paid (reportedly) up to $1 million just to openly play through a brand’s new game.

There are also sponsorships in which brands will pay popular streamers to use their gaming equipment. This typically manifests in a player visibly wearing a specific brand’s headset, chair, or keyboard during their streams. Unlike the sponsored streams, these deals are negotiated privately, and thus, their ultimate cost and profit remain unknown.

Pages Related to How Much Money Does A Video Game Streamer Make?