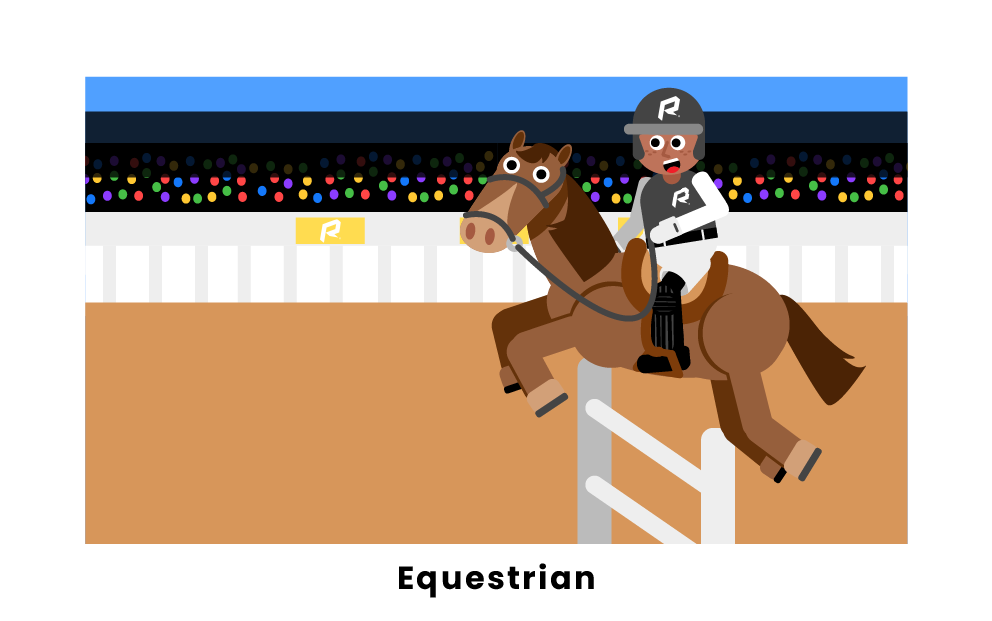 Equestrian, also commonly called horseback riding, is the skill of riding a horse. The current Olympic equestrian events are dressage, show jumping, and eventing. Other events recognized by the International Federation for Equestrian Sports are combined driving, endurance, reining, and vaulting. 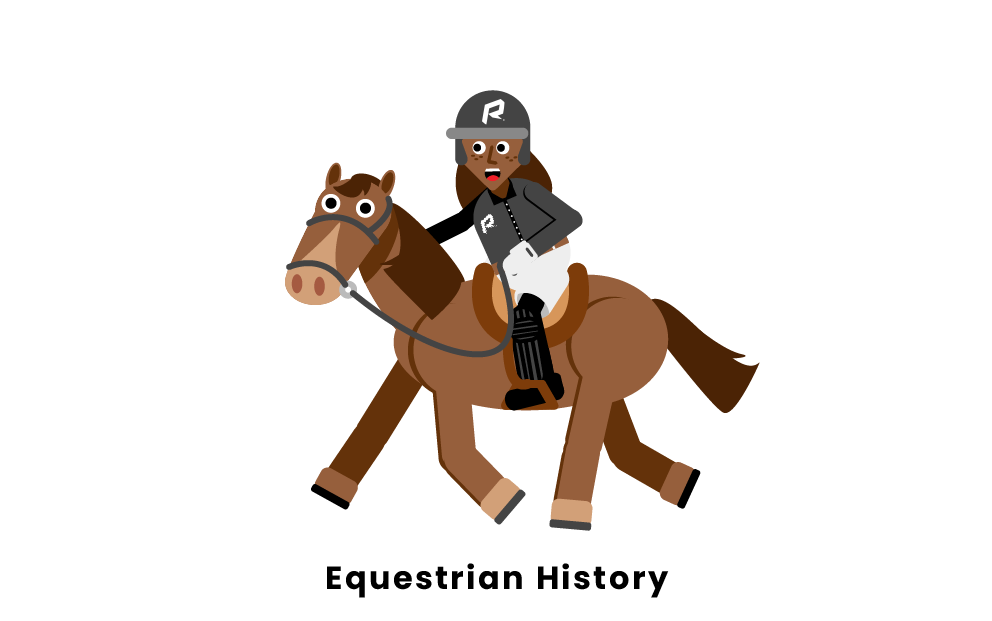 Today’s modern equine sports can be traced back to ancient Greece where dressage was developed as a way to prepare horses for battle. Athenian general Xenophon observed horses' natural movements while they moved freely in a herd, recognizing that the traits he observed could be used as a major strategic advantage over armies on foot. As non-military persons began to adopt the sport, modern dressage developed, retaining many of the original principles.

Horses were also used in the ancient Olympics when chariot racing was introduced to the games. Jumping developed from the 17th and 18th century fox hunt and steeplechase. Foxhunting originated in England during the 1500s as a way to control pest populations. As farmers began fencing off their land, it became necessary to have horses that could easily and naturally jump over obstacles, as well as cover large distances. Eventing originated as a way to test and prepare military horses, consisting of dressage, show jumping, and cross country.

Many of the stylistic pieces of equestrian athletics are also rooted in the history and tradition of hunting in England. Horses’ tails and manes were braided to avoid snagging or becoming matted with burrs. Riding jackets, breeches, leather boots, and other parts of the clothing typically worn during equestrian competitions also come from hunting practices. 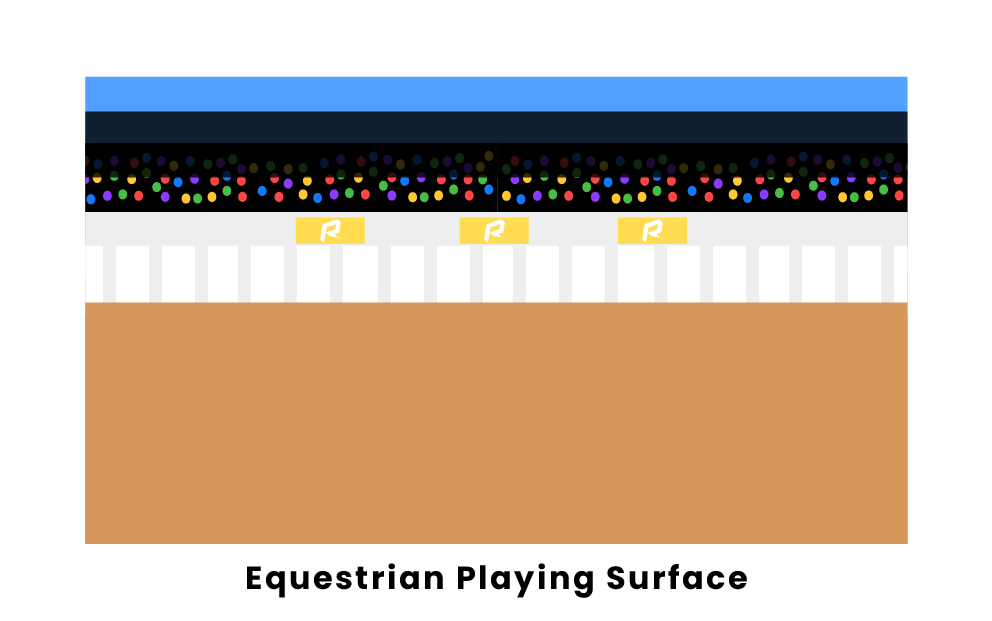 Many equestrian sport events take place in an arena. These arenas can be indoor or outdoor depending on climate. Equestrian surfacings can also be known as footings and due to the requirements of equestrian riders, surfacings have been developed scientifically and can be high tech. Wood chips and rubber pieces can be used as footings but they tend to be lower performance. Sand-based is the most popular footing. Coated sand-based footings use a coating to stick the components of the footing together while uncoated surfaces use water to bind the sand particles. 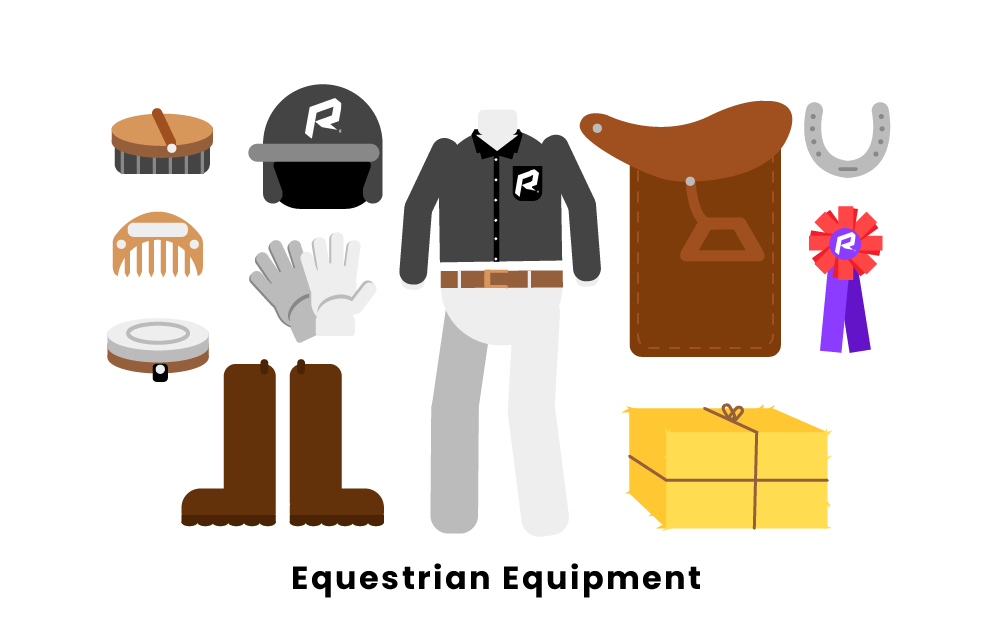 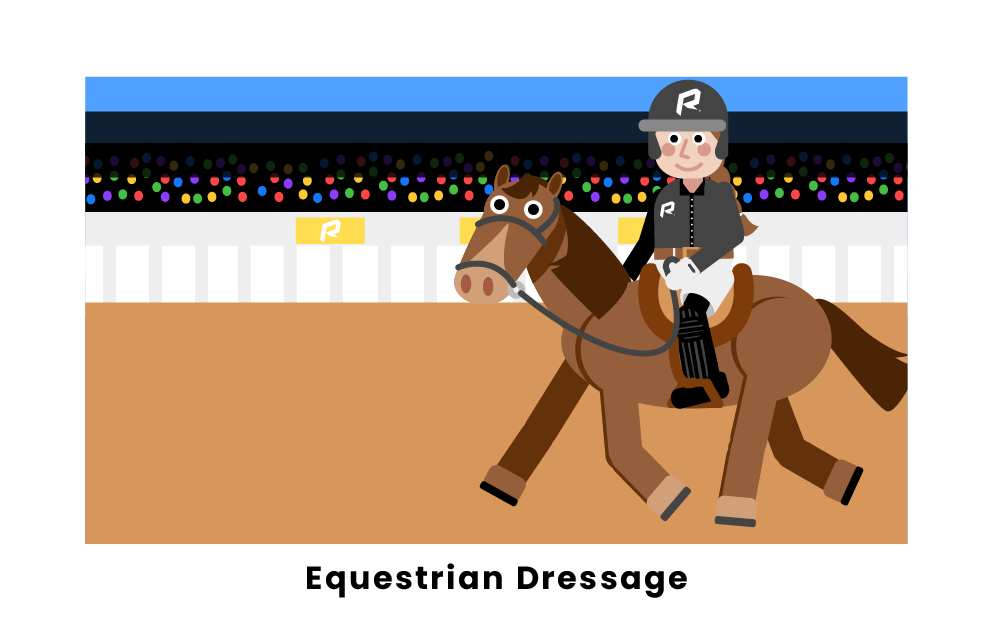 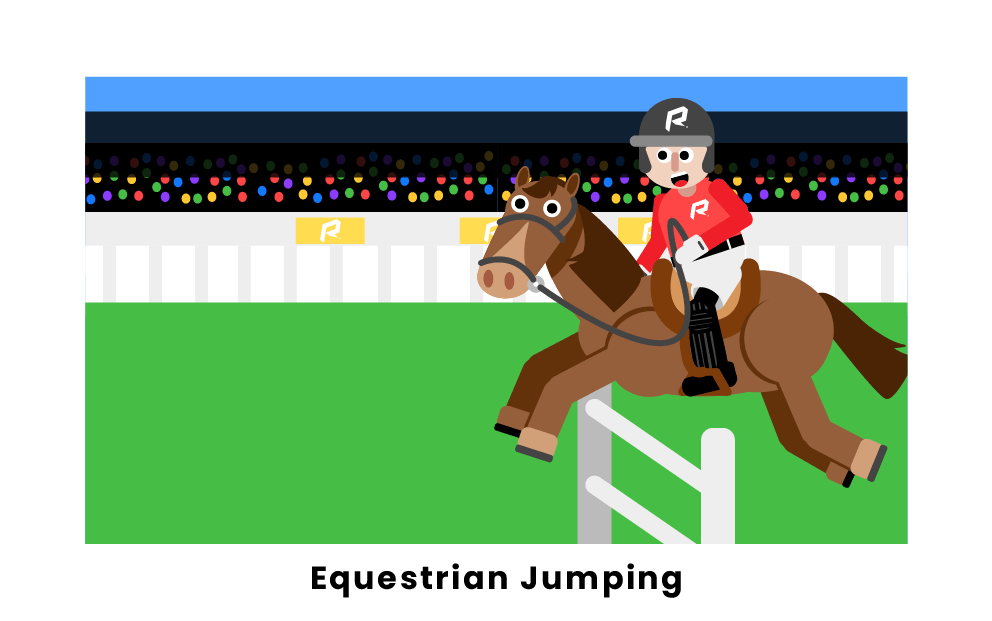 In show jumping, riders and horses jump over hurdles in set courses against a specific time clock and must do so with minimal to no mistakes. Jumpers must avoid knocking down poles of an obstacle or either the horse or rider falling. 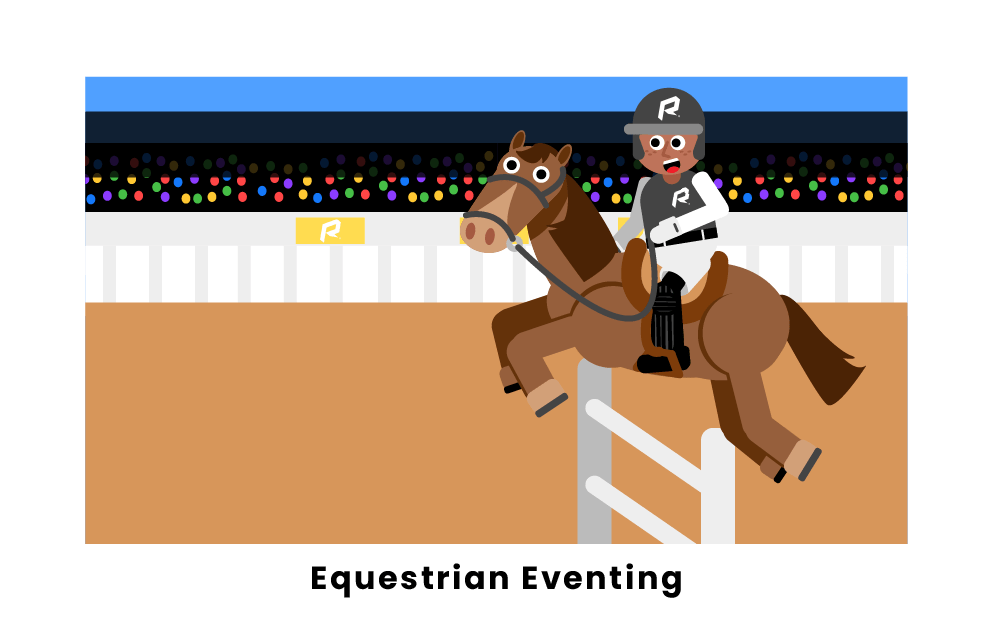 Eventing combines dressage, show jumping, and endurance, or cross-country. Eventing is held over the course of two or three days and in the endurance or cross-country portion, the rider and horse must navigate a series of obstacles over varied terrain. Men and women both compete against each other in this discipline. The rider with the lowest points wins as riders accrue penalty points over the competition. 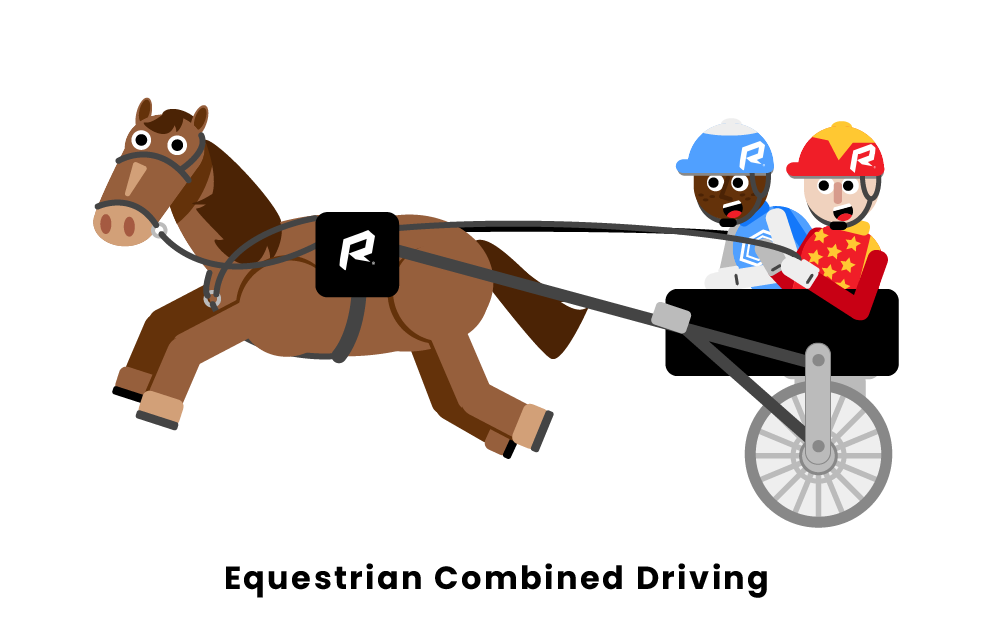 Combined driving is a three-phase carriage driving discipline. There can be one, two, or a team of four horses used. This discipline is made up of driven dressage to test the harmony, marathon which tests the horses fitness and the drivers accuracy and judgement through obstacles, and cones where they must navigate a narrow course without knocking cones down with carriage wheels.

Reigning is a western riding discipline, often called the western dressage. Horses are guided through specific patterns of circles, spins, and stops, designed to show the athletic ability of a horse that would typically be used on a ranch.

Equestrian vaulting combines skills and elements from dance and gymnastics, placing them on a moving horse. Riders perform acrobatic and gymnastic moves while on moving horses, including jumps. 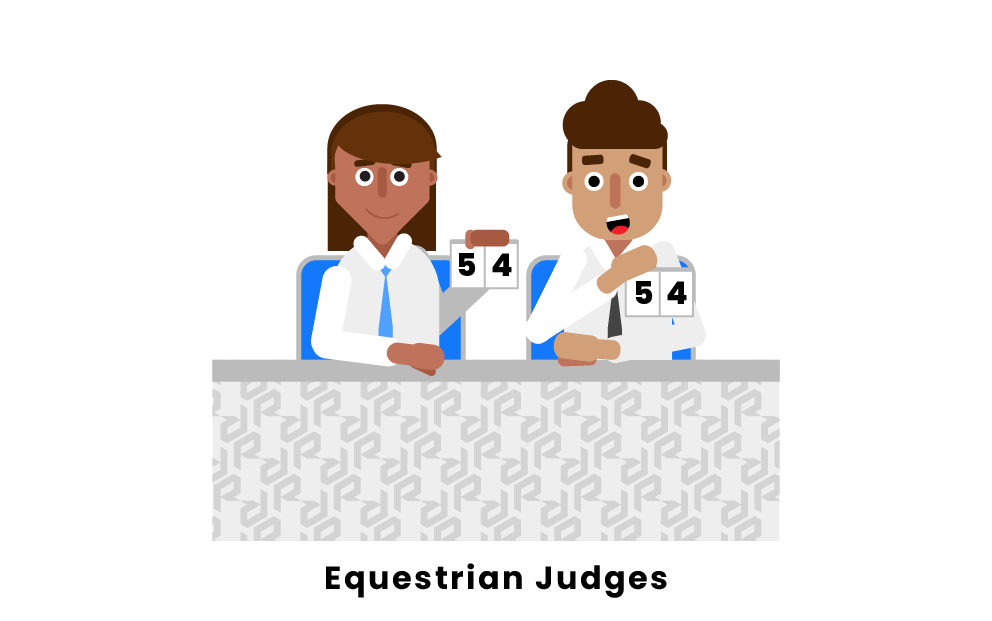 Judges not only determine competition winners, but also ensure fairness and maintain safety of the horses. For example, judges ensure that horses are fit to compete before they even reach the ring for show jumping and dressage. Each discipline of a competition is judged also differently. While show jumping is judged objectively based on clearing jumps, judges in dressage watch tiny movements of the horse and rider together, so their judgment can be more subjective. Judges for both disciplines also ensure that arena conditions are fair before competition begins. Show jumping judges also work with course designers to make sure the courses are at an appropriate level of difficulty. 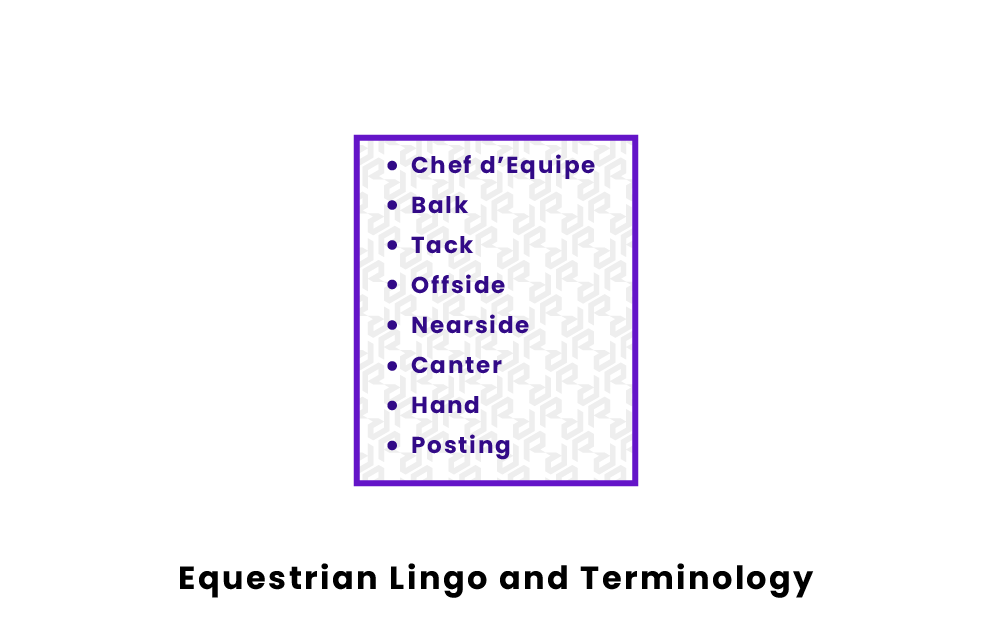 Horseback riding can be dangerous and it is important to have solid fundamental skills. Some important fundamentals for partaking in equestrian sports are self-awareness, focus, calm hands, patience, and consistency. Though not a technical part of riding, these skills will allow the rider to grow their understanding with their horse, allowing them to work as a successful pair. Every little movement can impact how your horse reacts and responds to you so it’s important to form good habits. Other fundamental skills are mounting and dismounting, balance, turn, reverse, back up, arena spacing, sitting trot, posting trot, and canter.

Some well known equestrian coaches and chef d'equipe are:

In equine sports, an athlete usually practices in an arena with an instructor. They help correct any bad habits and mistakes and help the rider grow and refine their skill set on the horse. Instructor certification is required in many european countries but not for US or Canadian instructors. Though not required in the United States and Canada, certification has many benefits including safety and working for a higher price or being hired at a better stable or farm to be an instructor. Instructor fees can range from $45 to $80 an hour each session and with certification, instructors are able to charge at the higher end of that range.

Equestrian sports can be very physically demanding and each minute position of a rider’s body influences the horse they are riding. It is important to train your body to avoid sending mixed and conflicting signals to the horse through your hands, legs, and seat. A way to correct too strong of hands, which can lead the horse to have too strong a bit, hold the reins backwards like the reins of a driving horse. A drill to help fix leg position and balance is to alter the posting sequence; sit in the saddle for two beats then rise up for one, then switching to staying out of the saddle for two and sitting for one.

Equestrian jumping events were on the program for the Paris games in 1900 but were withdrawn until the 1912 Stockholm games. Since 1912, Equestrian events have remained on the olympic program. Until 1948, the riders who competed had to be military officers, meaning only men could compete in Olympic equestrian events. The officer restriction was lifted in 1951 and since the 1952 Helsinki summer games, women have competed, first in dressage and then in the other equestrian events- show jumping and eventing.

In eventing, women and men compete equally alongside each other, making it one of the few Olympic sports where that occurs. In each of the three events, there is a team competition and an individual competition. Each country is allowed no more than three riders per individual event. At the 2008 Beijing Summer games, Ian Millar of Canada won the silver medal in team jumping at the age of 61, making him the oldest medallist at the 2008 Summer games.

A few of the best equestrian athletes in the history of the sport are:

There are a couple leagues that operate within equestrian sport.

Here are some brands that provide equestrian equipment:

How many equestrian sports are there?

In the Olympics there are three equestrian events while the international governing body the FEI recognizes seven.

What are the equestrian events?

Is Equestrian an expensive sport?

Horseback riding is considered an expensive sport due to the amount of specialized clothing and equipment that riders need to purchase. Lessons are also very expensive, the average cost ranging from $45 to $80 for an hour lesson depending on location. Horse tack and boarding is also very expensive.

Is Equestrian an Olympic sport?

Yes. Equestrian sports have been included in the Olympics consistently since the 1912 Stockholm Summer games.

Pages Related to What is Equestrian?