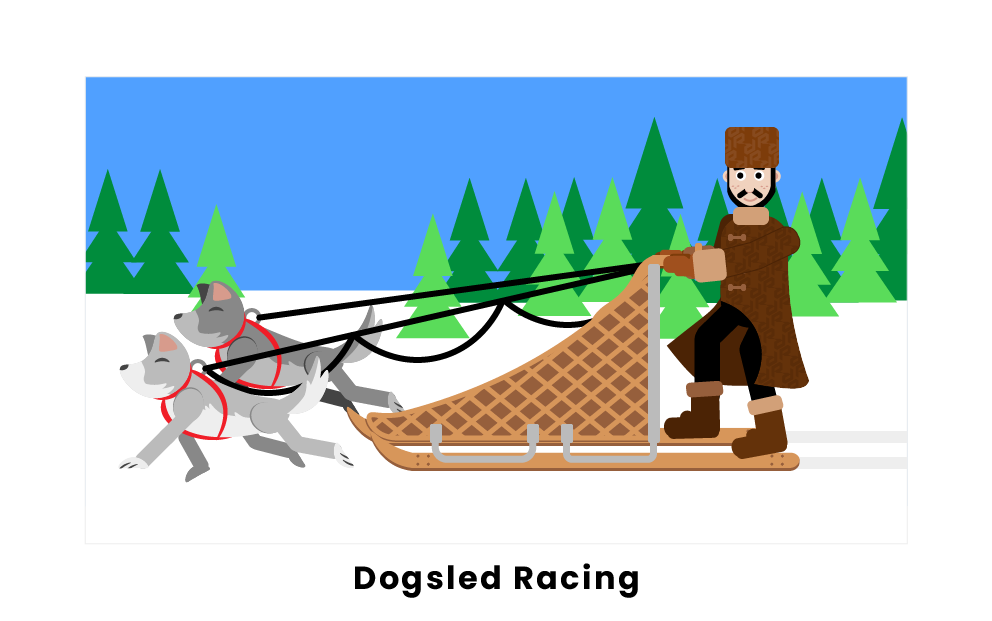 Dogsled racing is a sport where athletes ride sleds pulled by teams of dogs over snow-covered cross-country courses. Dogsled riders, also known as “mushers,” typically command teams of four to ten dogs but can occasionally lead up to 18. Dogsledding originated thousands of years ago as a means of transportation for Alaskan natives across the snowy landscapes. In the early 20th century, dogsledding increased in prominence due to the Yukon Gold Rush, as dog sled teams were used for freight and mail delivery.

Many types of dogs are used in dogsled racing. The most common types of sled dogs are Alaskan Huskies, followed by Eskimo Dogs, Siberian Huskies, Samoyeds, and Alaskan Malamutes. The sleds pulled by the dog team are typically made of ash wood, leather, and nylon and can be either toboggan-style or basket-style. The sleds rest on runners made of plastic, wood, or metal and are attached to the dogs by a gangline that is hooked to the dogs’ harnesses. In order to slow or stop a moving sled, the musher can use a foot brake or a specialized snow hook to force the dogs to stop.

Dogsled racing depends upon cooperation between the musher and their dogs. Dogs are trained to obey the musher’s voice commands, and a strict diet is necessary to keep the sled dogs in racing form. There are various types of dogsled races, classed as sprint races (races up to 30 miles), mid-distance races (50-200 miles), and long-distance races (200-1,000+ miles). One of the most famous dogsled races is the Iditarod, an annual race of over 300-600 miles, which Dorothy Page created in 1973.

What is dogsled racing?

Dogsled racing is a sport in which racers ride on sleds pulled by teams of dogs over snowy cross-country courses. Dogsledding was once a means of transportation for Alaskan natives and was also used to haul freight and mail during the Yukon Gold Rush in the early 1900s. Today, dogsled racing is a popular sport, and famous races such as the Iditarod occur annually, covering long distances of many hundreds of miles.

What are the best breeds to dogsled race with?

What equipment do I need for a dogsled race?

Various types of equipment are used in dogsled racing. The most obvious is the sled, which is typically made of wood, and sits on runners of wood, plastic, or metal. The sled attaches to the dogs with a gangline that hooks to each dog’s harness. For the rider, long-sleeved, heavy winter clothes are required due to the extreme temperatures, as well as goggles, gloves, and camping equipment for races that last many days. For the sled dogs, riders often bring dog jackets, male wraps, and belly wraps to prevent the dogs from getting frostbite, as well as booties for the dogs’ paws. Other equipment used by mushers includes a snow hook, which is used to stop the dogs when the musher wishes to halt.