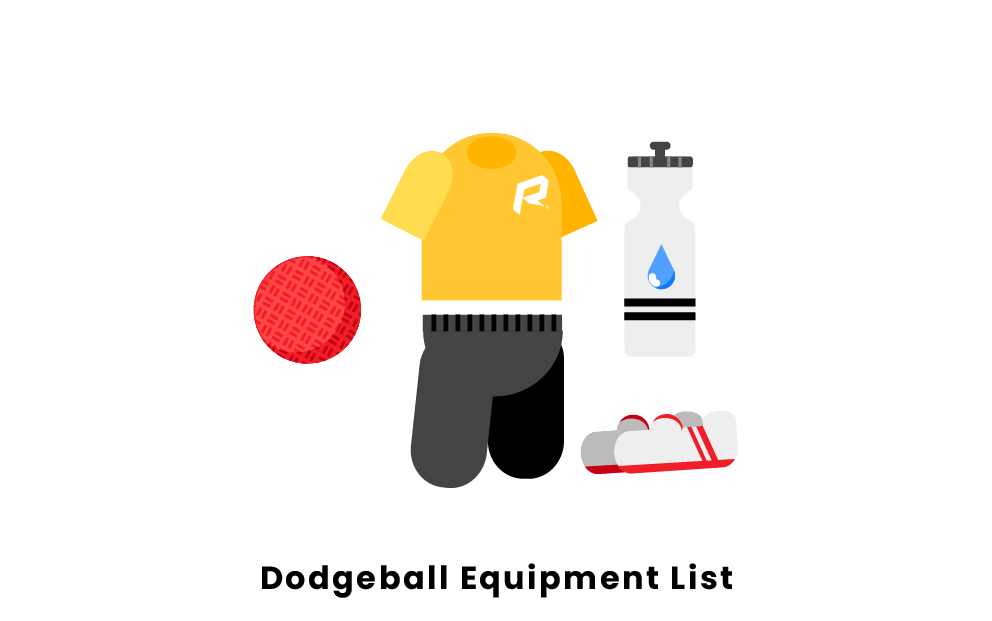 Dodgeball is a team ball sport that is commonly played in school gym classes. The goal is to eliminate all the members of an opposing team. Players are eliminated when they are hit with a ball. Players must also leave the game if they throw a ball and it is caught out of the air. There is a center line that players cannot pass. A referee determines whether a player successfully dodged a ball or if it hit them, and players can use the balls they are holding to block their opponent's throws. 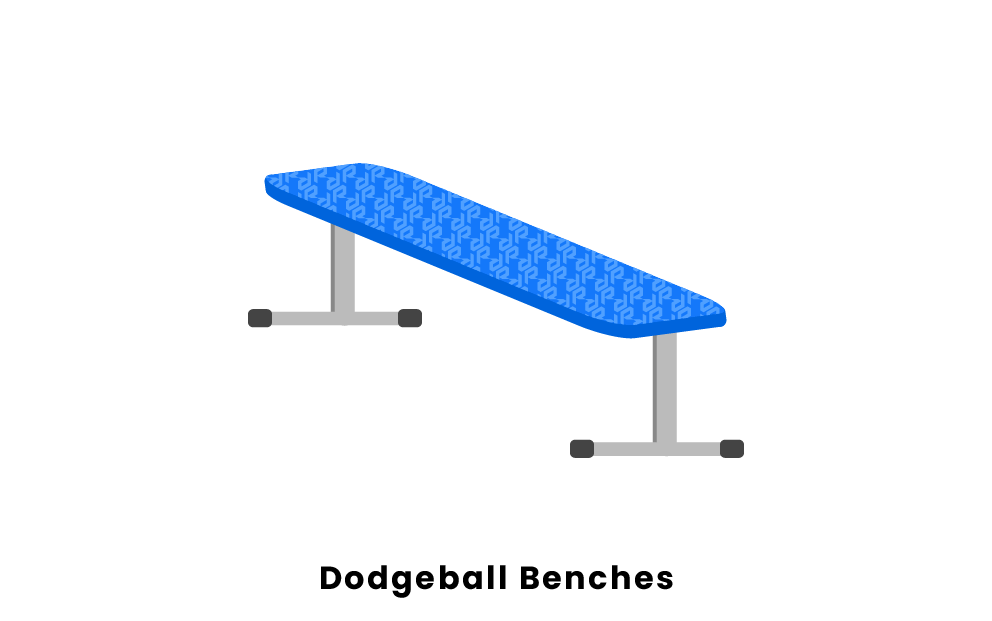 The benches used in dodgeball games are usually standard metal benches found at youth sporting events. Dodgeball benches are generally large enough to fit all the players on a team, although there are usually no exact specified dimensions. Dodgeball benches serve as the location of “jail” when a player is “out”, via either a catch or being hit. One player may exit the bench and return to play whenever a teammate catches a ball thrown by the other team. 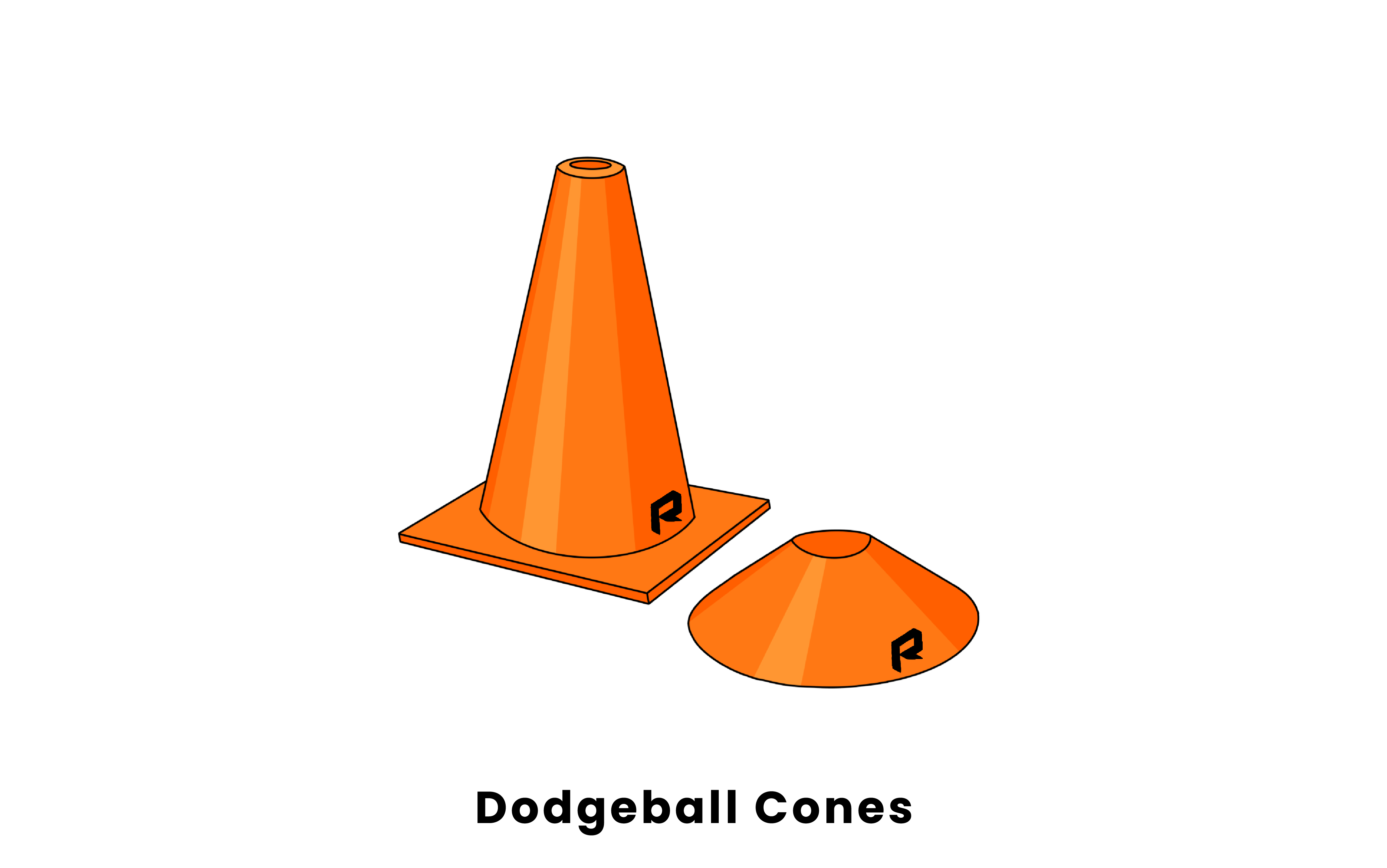 In dodgeball, cones are often used to mark off lines and boundaries of the playing area. It is not uncommon to see cones lined up in the middle of a court, at corners, or along sidelines. This is especially true for dodgeball games at outdoor locations, since there may not be defined lines for boundaries in, say, an empty field. The cones used in dodgeball are generally smaller than traffic cones, for example, but the size and shape of these cones varies by availability. 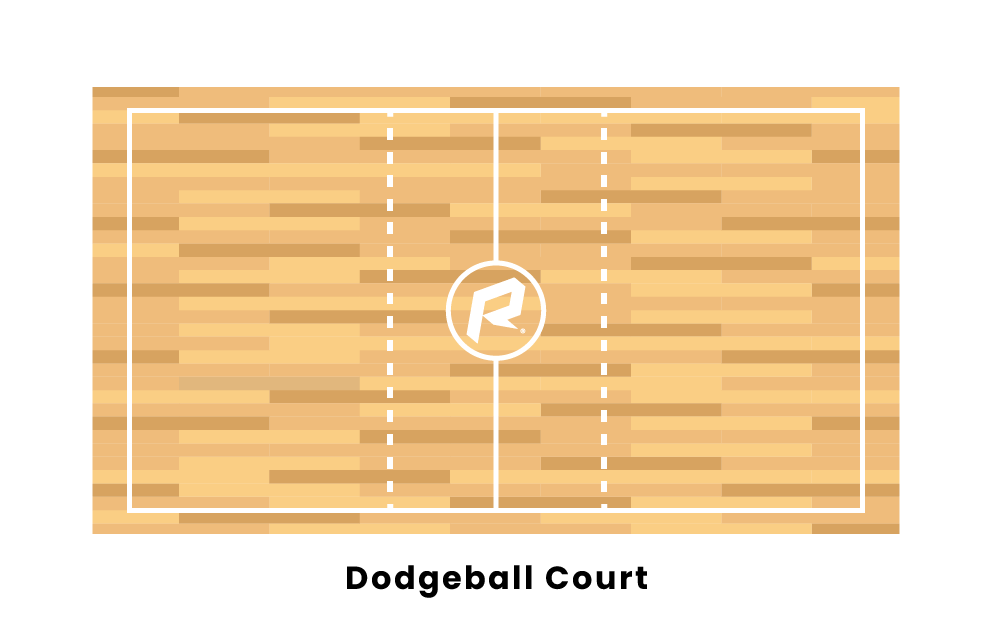 One of the most basic needs of a dodgeball game is a court or playing area. An official dodgeball court has two halves sized at 30x30 feet each, including a 4x30 foot rectangle around the center of the court that serves as the “neutral zone.” 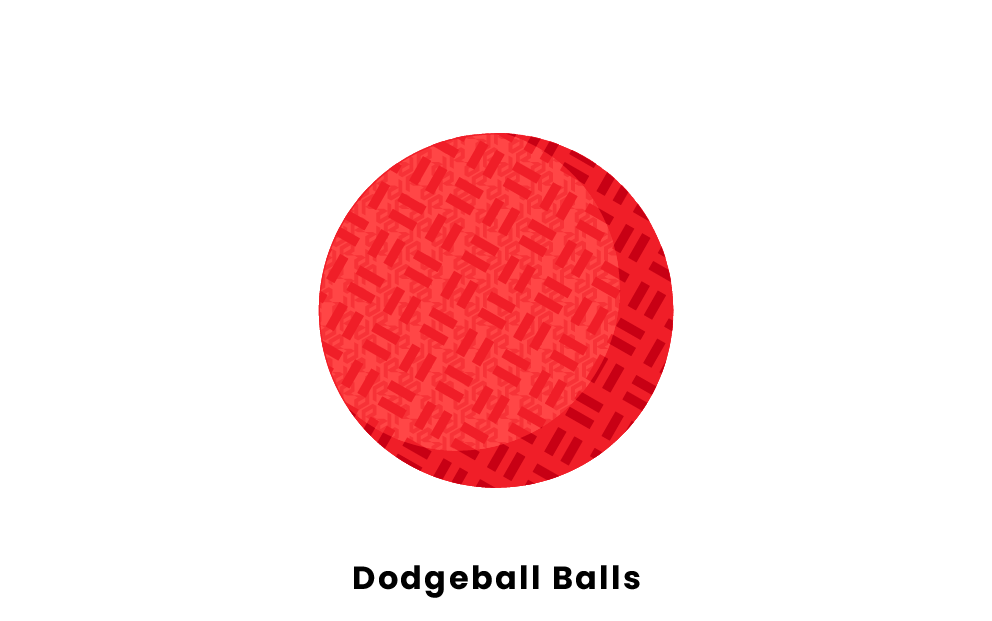 The most important equipment in any dodgeball game are the dodgeballs themselves. Dodgeballs are thrown and sometimes caught to get players “out.” Most dodgeballs are of similar size to or just smaller than normal playground balls, which are 8.5 inches in diameter. Some games may use softer, lighter balls to decrease the risk of injury, but the standard dodgeball is an inflated rubber ball at about 8.5 inches in diameter. These can be purchased as sets or individually at most home or sporting goods stores. A set of smaller foam ones might cost between $10 and $25, while larger rubber ball sets can cost up to $80 depending on the quality and number of balls in the set. 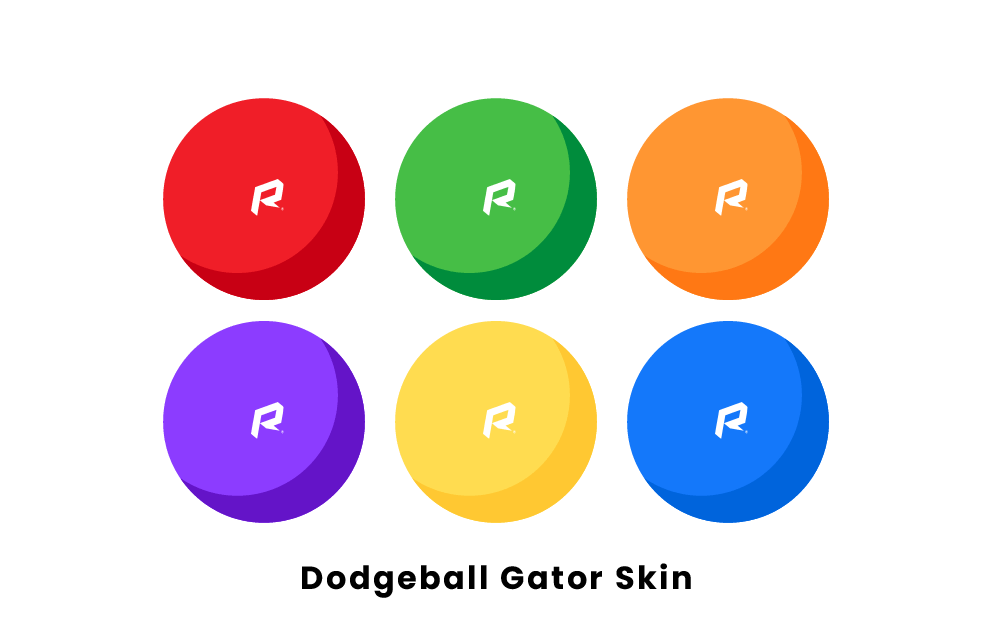 The most important equipment are the balls themselves. There are many different types of dodgeballs, varying in size, density, and material. Kids generally use the smaller, lighter variety such as gator skin balls, while professional leagues will use rubber balls that can inflict more pain when hit. 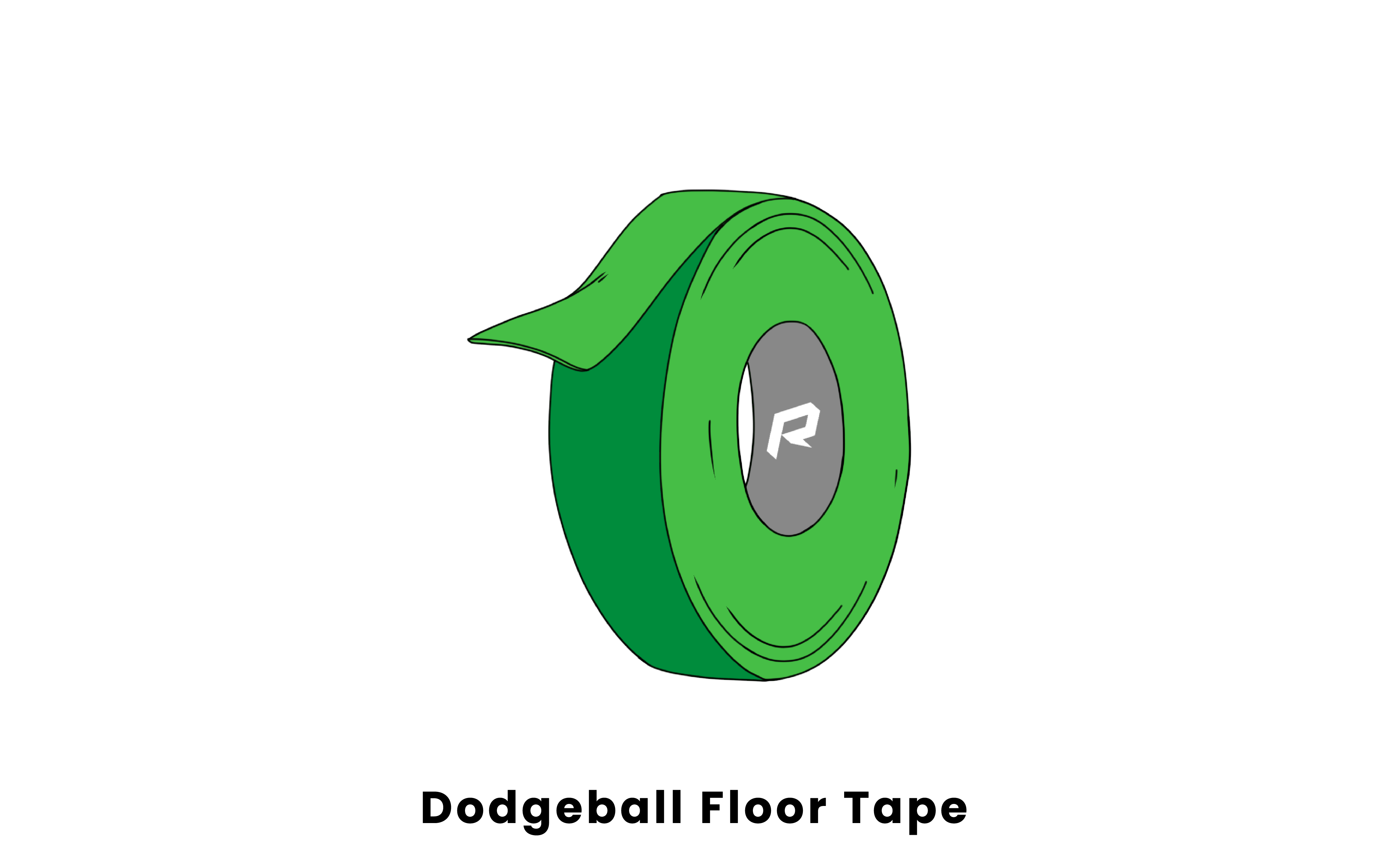 Indoor dodgeball games played on basketball or futsal courts do not often include court lines and markings specific to dodgeball. Since it is more of a recreational sport than volleyball, for example, dodgeball courts are often marked using tape. Floor tape is usually kept and applied by a physical education teacher or game official. This is usually non-marking, easily-removable tape such as masking tape; and can be purchased cheaply at almost any common store for a few dollars. 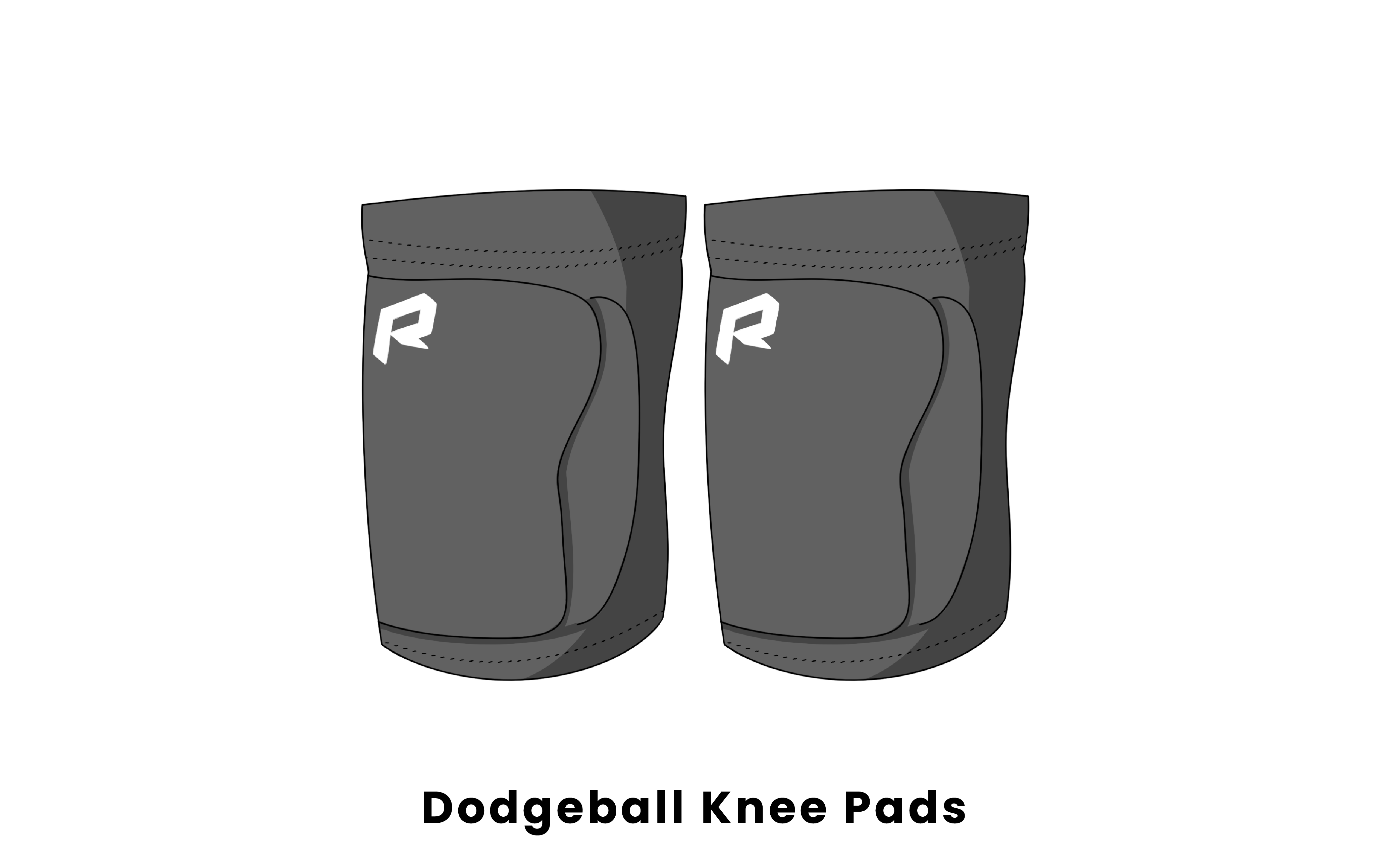 While knee pads are not generally a required part of dodgeball uniforms, they can serve an important purpose on the court. Dodgeball is a game of quick, unpredictable movements; players have to launch themselves out of harm’s way constantly to stay in the game. This means hitting the floor a lot, which can easily damage a player’s knees. Knee pads vary in size, shape, and material, and they range in price from under $10 to over $30. 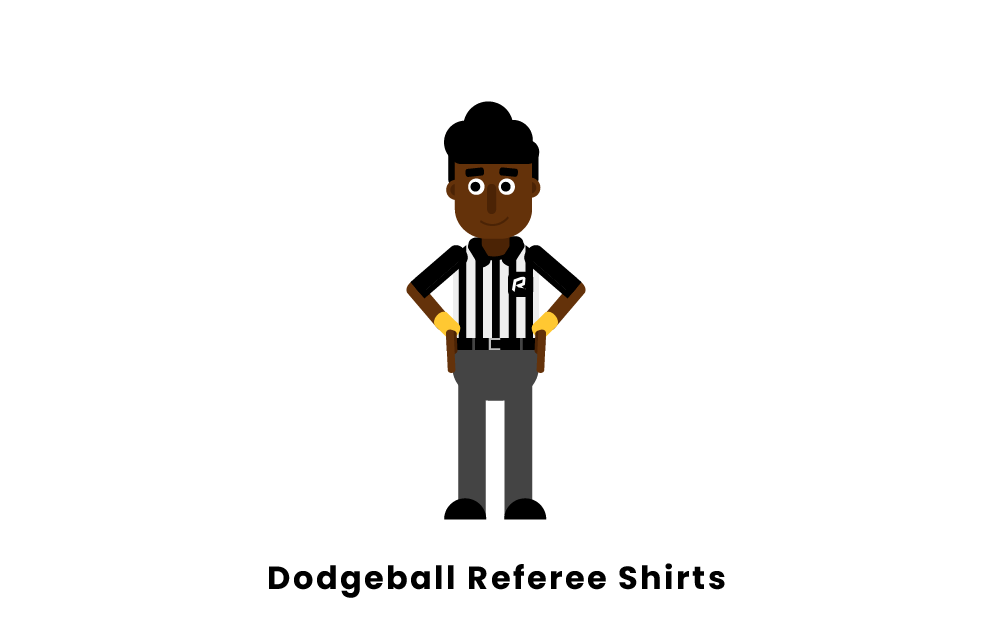 Referees for educational or recreational dodgeball games are fairly uncommon, but in organized competitions the referee serves a very important role. The referee has complete control over the game, including judging who is in or out of the game. This requires being up close to the action, and therefore designating themselves from the players with a unique uniform. Dodgeball referees often use standard black and white striped referee shirts, as seen in basketball or football, for example. These are relatively inexpensive, ranging from under $15 each to over $60. 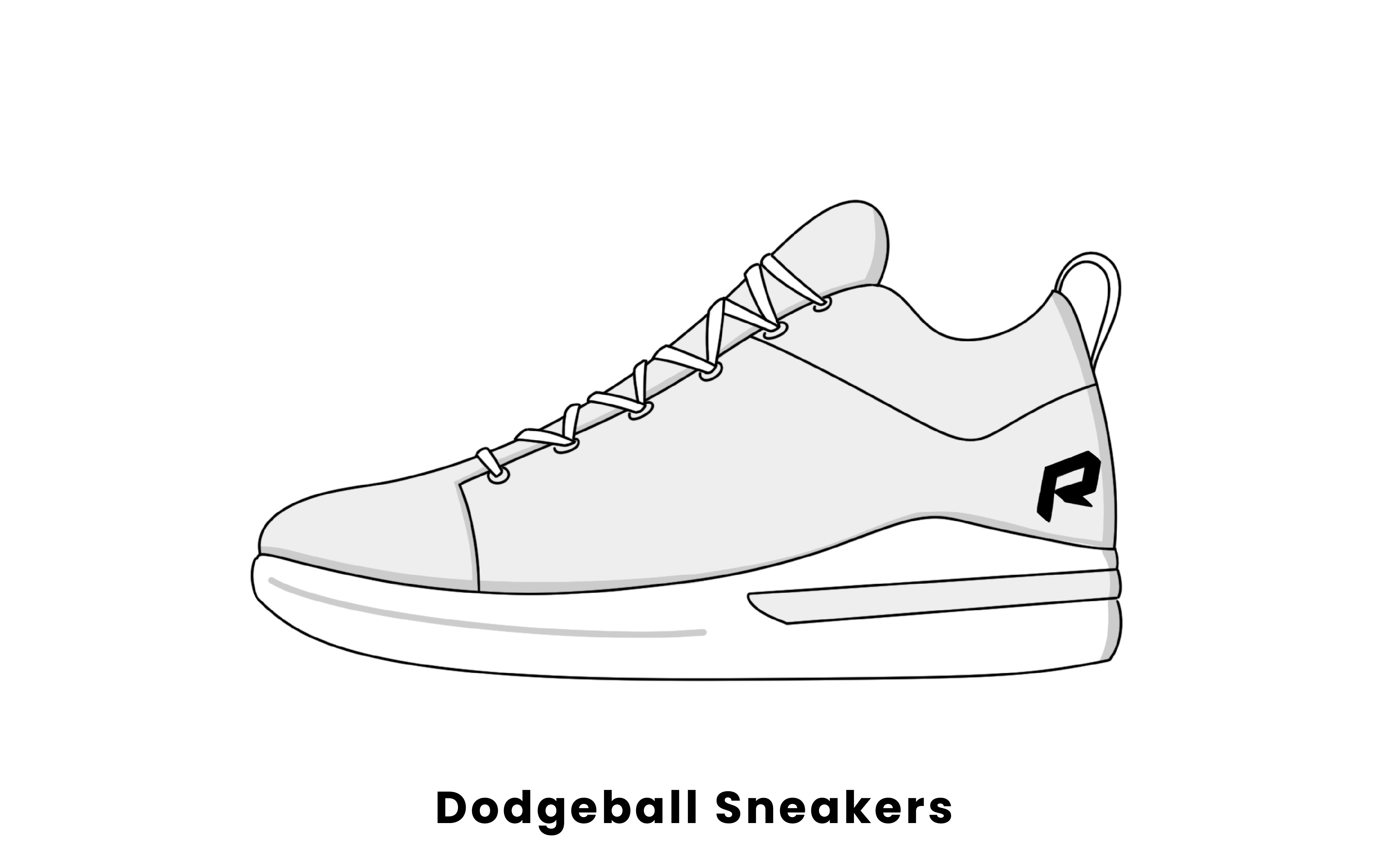 Having quality dodgeball sneakers is crucial for players and referees, who must be able grip the floor and move in any direction quickly. Players are often asked to wear non-marking, rubber soled shoes in order to preserve the basketball court the game may be played on. Running shoes, tennis shoes, or basketball shoes are common types of shoes seen in dodgeball games. Sneakers can range from about $75 to $200 in price, depending on brand, design, and quality. 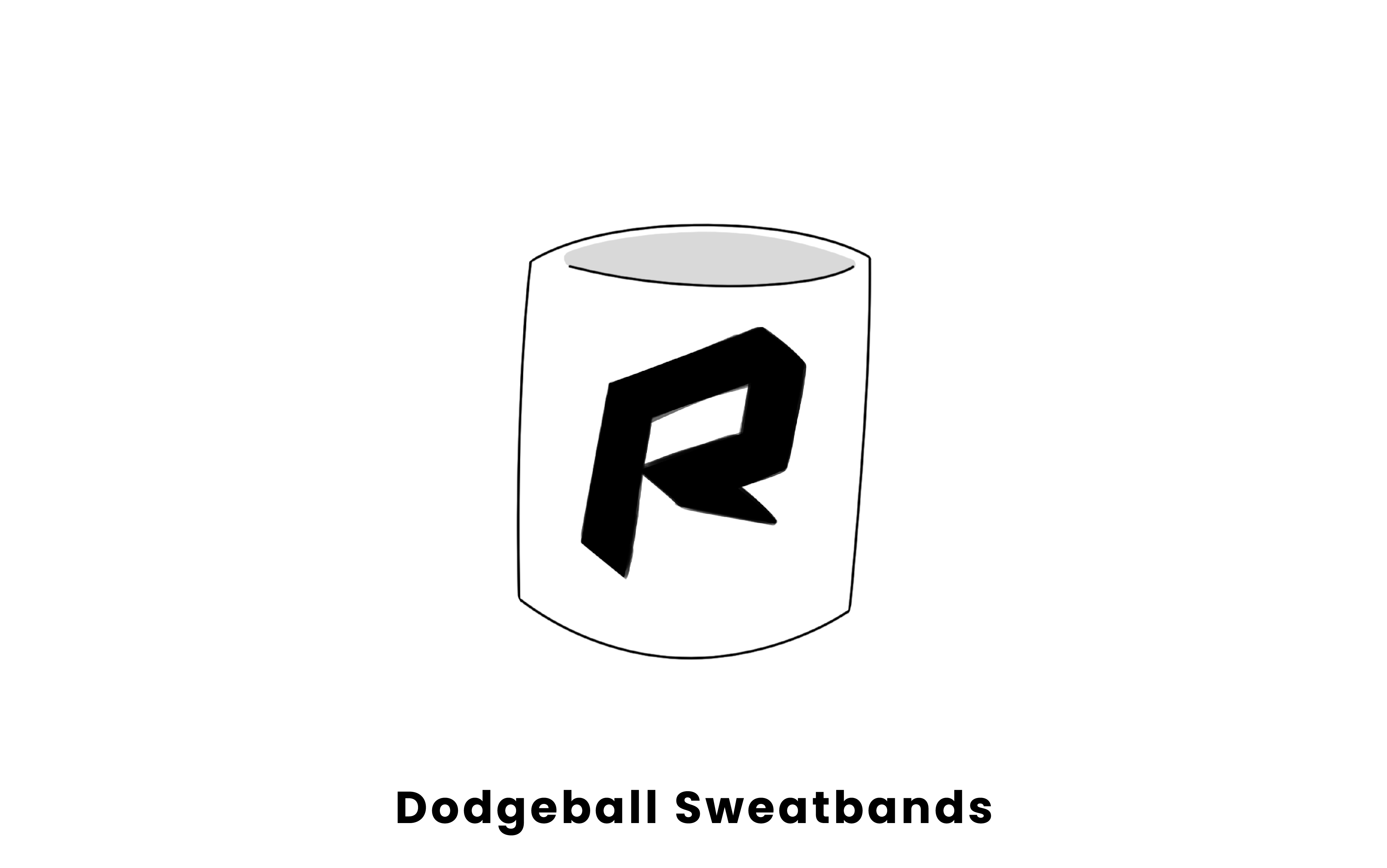 Dodgeball requires a lot of quick movements from players, as well as the strength to throw someone out with a ball from across the court. Heated games of dodgeball can really make players sweat, and this can be an unneeded disruption during the game. This is where sweatbands come in. Sweatbands soak up sweat from the forehead or wrists to prevent it from getting in players’ eyes or on their hands. This enables them to see, throw, and catch better. Sweatbands can be found for under $20 at many sports retail stores. 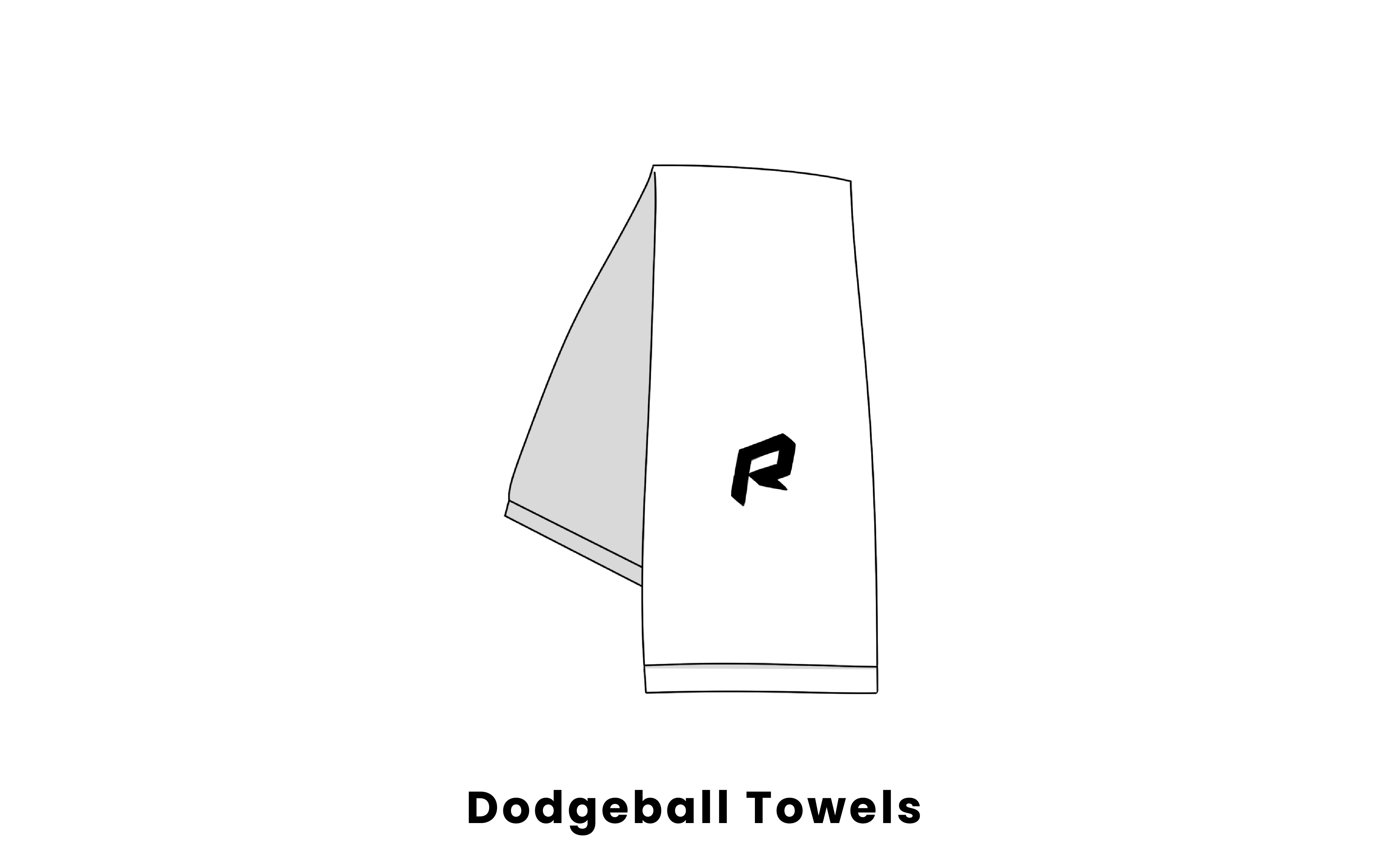 Towels and sweatbands serve a similar purpose for dodgeball players. The literal heat of competition means players need to get rid of sweat, and this is most commonly done with sweatbands and towels. Unlike sweatbands, towels are only used on the bench, instead of during the game. Neither towels nor sweatbands are required by official rules, but they can both be important factors in a player’s game when used effectively. Towels are cheap and can be purchased for less than $10 each at almost any store.

In dodgeball, uniforms are sometimes used to distinguish teams from one another and display team unity. In more recreational dodgeball games, colored pinnies may be used as uniforms. One of the great features about dodgeball, though, is that uniforms aren’t really needed if you don’t have any. Players staying on their respective sides ensures there is a clear separation between the two teams, even without uniforms. Uniform rules and regulations are different for every league, but general rules are that every member of the team must be in uniform. 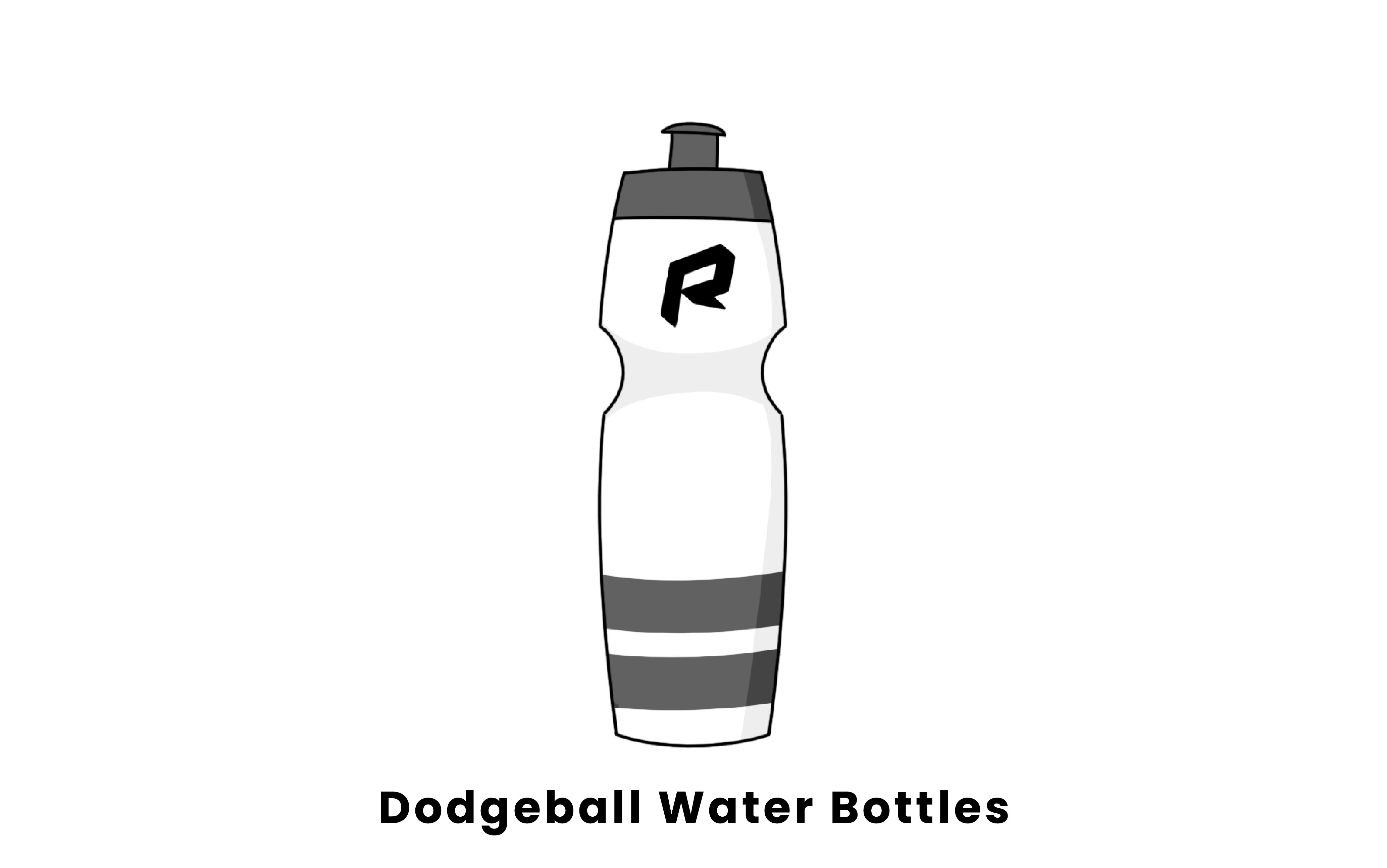 Staying hydrated is important in every sport, and dodgeball is no exception. Dodgeball players are constantly moving, throwing, and running across the court. With these large amounts of energy being expended, it is crucial that dodgeball players rehydrate themselves after each game. Water bottles are usually allowed on the bench, but not the court itself. Players usually have their own water bottles, but large packages of water are commonly purchased for team use as well. 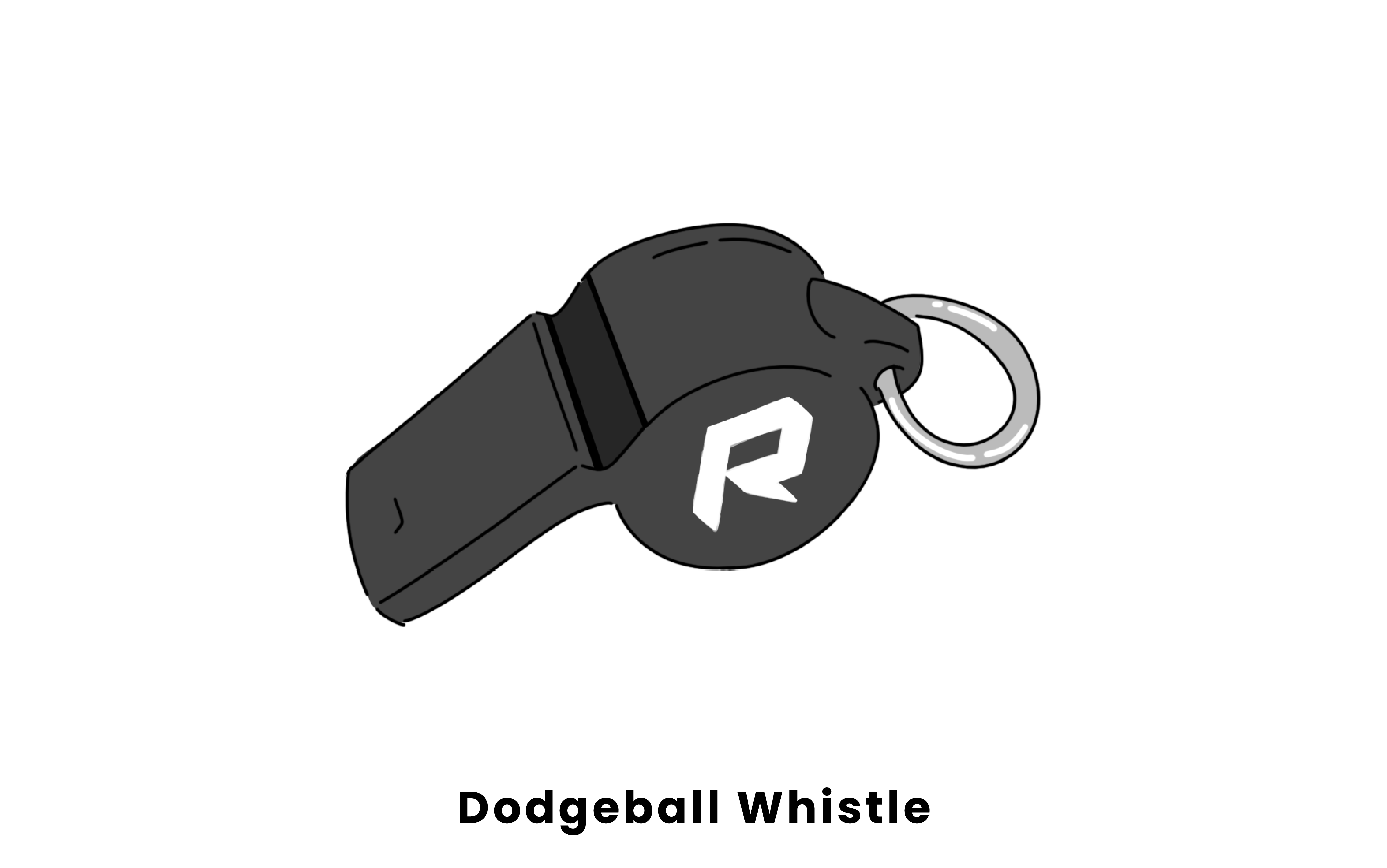 A whistle is used by the referee to signal the start and end of a dodgeball game. While a whistle is not exactly a necessary part of every dodgeball game, it can be helpful to have a clear method of communication for the referee. This is especially true for youth dodgeball games, such as those in elementary schools during physical education classes, where a large number of kids can be difficult to silence. Whistles are not exclusive to dodgeball and can be purchased for less than $10 at sporting goods stores.

What equipment is used in dodgeball?

To play dodgeball you’ll need dodgeballs, floor tape, and team uniforms. Next, you’ll need accessories like sweatbands, towels, wrist bands, and a water bottle. As a referee you’ll need a referee shirt and a whistle.

Dodgeball equipment is unique because of how few things are necessary to play. Makeshift dodgeball games can be created simply by having a throwable object, two people, and an established boundary.

The balls used to play are not utilized in any other sport, but the accessories such as water bottles, benches, knee pads, and sweatbands are commonplace throughout most games.

The referee equipment is also not unique to dodgeball, as many observers require whistles to make signals.

What is the most important dodgeball equipment to buy?

The most critical equipment is the balls. You want to make sure you are getting the type of ball that best suits the people who will be using them, since regulation-sized rubber balls may be too big for children to throw with any power or accuracy. In dodgeball, balls are in constant use throughout the game. The quality of the product is important to consider when making a purchase.

How much does dodgeball equipment cost?

A high-quality dodgeball can be purchased for around $10, although that number fluctuates with size and quantity. If you want to play a game with full teams, then you will need 4 or 5 balls for the game to be competitive. Other items such as knee pads and sweatbands can be bought for $10 or less as well, but are not required.