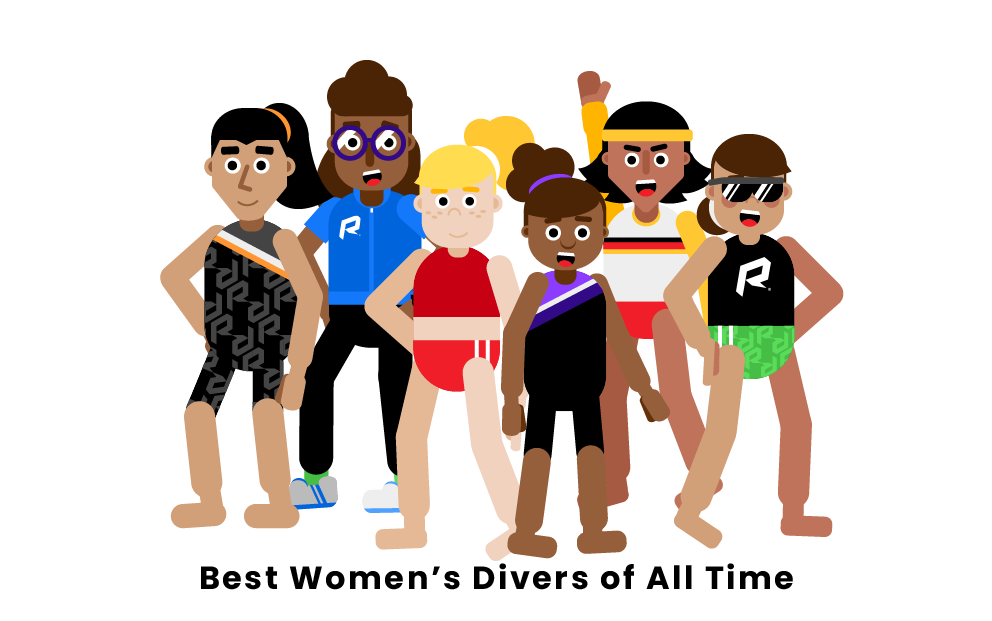 Diving is an art form that is competed throughout many levels. Since 1904, athletes have been diving at the Summer Olympics. The athlete jumps from a platform or springboard (typically 3m or 10m from the ground) while performing aerobic moves before they dive into the water.

Who are the best women’s divers of all time?

Wu Minxia was born in 1985 in Shanghai, China. The first Olympics that she competed in was in Athens in 2004. She was awarded four gold medals on the synchronized springboard, one gold medal, one silver medal, and one bronze medal for the springboard. She also competed at the Beijing, London, and Rio Olympics. In 2011 and 2012, she was named the Diver of the Year by the International Swimming Federation. Minxia also holds the record for the most Olympic medals by a female diver and the most gold medals by any Olympic diver. She suffered countless injuries throughout the years but still was able to build a remarkable career.

Guo Jingjing was born in 1981 and first competed in the 1996 Atlanta Olympics at 14 years old. In all of her competitions, she only competed in 3m board events. From 2001 to 2009, she won seven titles for her events. These include two Olympic medals and double gold medals at five FINA World Championships. In the summer of 2008, she won her final two Olympic gold medals and became one of the most decorated female divers. She had also won numerous medals at other championships, including 42 gold medals at the Diving Grand Prix.

Chen Roulin was born in 1992 in Nantong, Jiangsu, China. She started diving for the national diving team at the young age of 11 and first went to the Olympics at the age of 15. She earned five gold medals in total for diving at three different Olympic games. Chen has also won 10 World Championship medals, 9 FINA Diving World Cup medals, and 54 Diving World Series medals. At the age of 23, she suffered a neck injury and decided to stop competing and retire.

Fu Mingxia is a retired Chinese diver who was born in 1978 in Wuhan, Hubei Province, China. She started as a gymnast and was on the best diving teams in the 1990s. In 1991, she became the youngest world champion, and the next year she became the second-youngest person to win an Olympic gold medal at 13 years old. Mingxia won her first gold medal at the 1992 Olympic Games in Barcelona, and has five Olympic medals in total, including four gold medals and one silver medal.

Shi Tingmao did not start out as a diver but as a trained gymnast instead. She started gymnastics at age five and switched over to diving at age eight. She did not make it onto the national team until 2012 and was 21 when she finally joined the team. Meanwhile, many other athletes retire from the sport at this age. She has won four Olympic gold medals in total and many other medals from major competitions, including the World Championships, Asian Games, and the FINA Diving World Cup. Most of her medals came from 3m events, but she was also able to win a few events on the 1m board.

A pioneer of the sport, Pat McCormick is an American athlete who was born in 1930 in Seal Beach, California. She competed both on outdoor and indoor platforms. On two occasions, McCormick took home two gold medals in a single Olympic Games, doing so in 1952 and then repeating the feat in 1956. In addition to her Olympics dominance, she also won 27 national championships. In 1956, she won Press Female Athlete of the Year and the James E. Sullivan Amateur Athlete of the Year awards. After the Olympic Games in Melbourne, she decided to retire and opened a diving camp shortly after. She was inducted into the International Swimming Hall of Fame in 1999. Her daughter later followed in her footsteps and won a silver and bronze medal, each at different Olympic Games.

Who is the best women’s diver of all time?

The best women's diver of all time is Wu Minxia. She won seven Olympic medals, including five gold medals, between 2004 and 2016. She has also received a World Championship medal an impressive 14 times. Chen Ruolin is a close second, who also has won five Olympic medals.

What women’s diver has won the most Olympic gold medals of all time?

What women’s diver has won the most World Aquatics Championships gold medals of all time?

Pages Related to Top 6 Best Women's Divers of All Time