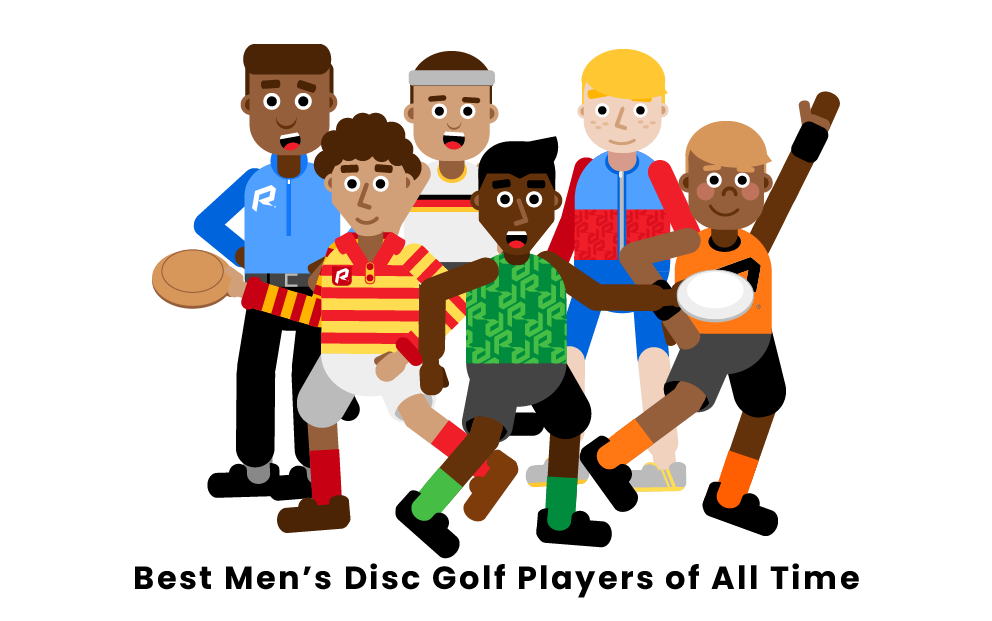 Disc golfers are some of the most dedicated athletes in the world. Professionals are chronically underpaid, leading only the most passionate to return year after year. From the godfather of disc golf, Ken Climo, to the champion of today and likely tomorrow, Paul McBeth, here is a list of the best men’s disc golfers of all time.

Who are the best men’s disc golf players of all time?

Nicknamed “The Champ,” Ken Climo is the greatest men’s disc golfer in the history of the sport. Starting in 1990, he won a staggering nine consecutive PDGA World Championship titles, reaching a record 12 world championships before he retired. Known for his putting and overall precision, Climo grew up playing traditional golf but moved to disc golf at age 18 because of the lower overall cost of the sport. He won his first amateur tournament in 1987, going pro the next year. Within two years, he won his first world championship, and a run of domination began, which has not been seen again in disc golf. Climo is also known for his signature line of discs, produced in partnership with Innova.

Paul McBeth is the best men’s disc golfer currently competing in the Open Division. He won the PDGA World Championships five times throughout the 2010s, with four consecutive titles. McBeth grew up in Huntington Beach, California. He turned pro at 18, competing in 29 events his inaugural season and earning Male Rookie of the Year. Four years later, he won his first world championship, which he defended for the next three years. McBeth has won the National Tour Series five times and the USDGC three times, with Majors wins across the globe. McBeth was sponsored by Innova for most of his career but began endorsing Discraft in 2018. He is also sponsored by Grip Equipment and Foundation Disc Golf.

Ricky Wysocki is one of the greatest men’s disc golfers ever, and his legacy is still being written. Currently ranked highest in the world, Wysocki has won the PDGA World Championship twice, defeating Paul McBeth both times. Now living in South Carolina, Wysocki grew up in Medina, Ohio, training at the nearby Roscoe Ewing Disc Golf Course. Going pro at 18, he won 2011 PDGA Male Rookie of the Year his first season, followed by winning PDGA Player of the year the following season. No other disc golfer has won those two awards back-to-back. 2016 was Wysocki’s best season to date: in that year, he won the PDGA World Championship, the PDGA National Tour Series, the Disc Golf Pro Tour points series, and the Disc Golf World Tour Points series. Wysocki is sponsored by Innova

One of the most successful men’s disc golfers in the sport’s history, Dave Feldberg won seven Majors across six different venues. His 17 National Tour wins ties the record for most of all time. Feldberg grew up in Silver Springs, Maryland, playing soccer and basketball. A friend introduced him to disc golf in college, and he soon turned pro. Feldman took a break from school to compete on the international tour but eventually finished his degree at the University of Oregon. After graduation, he returned to teach and founded the school’s disc golf program. Feldberg still competes, traveling to all Majors competitions and maintaining a sponsorship with Infinite Discs.

A PDGA tour regular for nearly 30 years, Steve Rico has maintained a long and competitive career while starting his own disc brand, Legacy Discs. Growing up in Sylmar, California–where he still lives today–Rico was immediately hooked when his father introduced him to disc golf at age seven. He turned pro at age 15, competing in the Junior II Boys, Intermediate, and Advanced divisions before entering the Open Division at age 18. Rico’s highest-profile wins were his two Japan Open titles in 2002 and 2006. He started Legacy Discs in 2011 with his older brother, Bamba. Rico continues to compete in the Open and Masters divisions.

Who is the best men’s disc golf player of all time?

Ken Climo is the best men’s disc golf player of all time. Although Barry Schultz can boast more career wins, Climo is called “The Champ” for a reason. He has more PDGA titles than anyone, winning nine in consecutive years. During his reign of dominance, Climo was ranked top in the world for 13 straight seasons. Paul McBeth is the best men’s disc golfer currently competing. If he continues on his current path, he may eventually surpass Climo as the greatest of all time.

What men’s disc golf player has the most PDGA titles of all time?

The men’s disc golf player who has the most PDGA titles of all time is Ken Climo. He has won a total of 15 PDGA Disc Golf Professional World Championships, taking 12 of his titles in the Open Division and the remaining three in the Masters 40+ Division. Climo won his first PDGA title in 1990. He then defended his title for the next eight seasons. This nine-year streak set a record that has not been broken yet. The runner-up for most PDGA titles is Peter Shrive, with 13 total.

What men’s disc golf player has earned the most Headrick Cup distinctions?

The men’s disc golf player who has earned the most Headrick Cup distinctions is Ken Climo. Each year the winner of the PDGA Male Player of the Year Award has their name inscribed on the Headrick Cup, which is on permanent display at the International Disc Golf Center in Appling, Georgia. Climo’s name has been etched in the trophy a record-setting 11 times. He first won the distinction in 1990; his most recent award was in 2007. Barry Schultz and Paul McBeth are tied for second place with five Headrick Cup awards apiece.