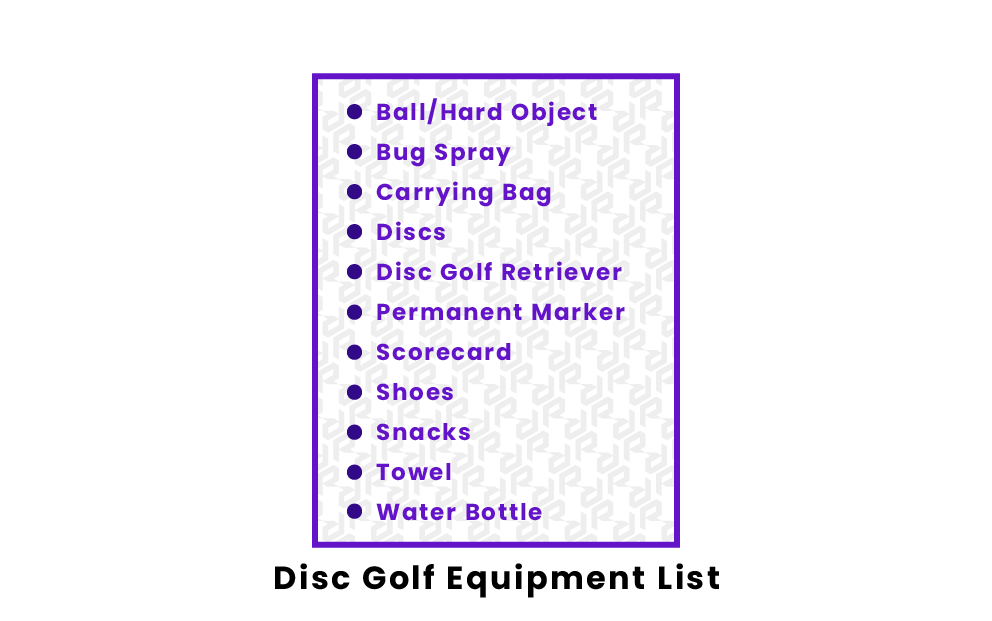 Disc golf is a sport that requires specific equipment for gameplay. It’s played on a specialized course that varies by location and difficulty. While traditional flying discs are used for sports such as ultimate frisbee, disc golf is best played with discs uniquely designed for the game.

The most crucial equipment for playing disc golf includes a set of discs and a bag to carry them in. Players can choose different discs based on their playing style, experience level, and different flight ratings. Aside from the discs, other essential equipment used on the course include a spare ball, bug spray, disc golf retriever, permanent marker, scorecard, a good pair of shoes, snacks, towel, and water bottle. Below is a complete list of the equipment needed and why it is necessary for playing disc golf.

Disc golf is a sport that requires specific equipment for gameplay.This article contains a list of equipment you’ll need to play. 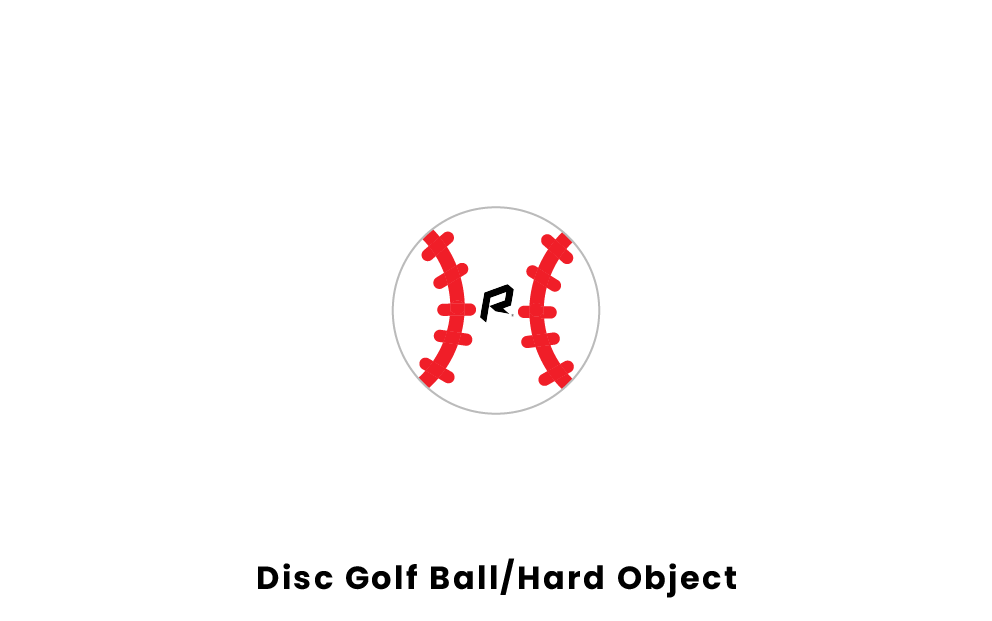 When playing disc golf, there is a chance that a disc may get stuck in a tree on the course. Carrying a ball or other hard object such as a hockey puck can be helpful to throw at the disc and knock it out of the tree. This saves players the danger of trying to climb the tree to retrieve the disc. 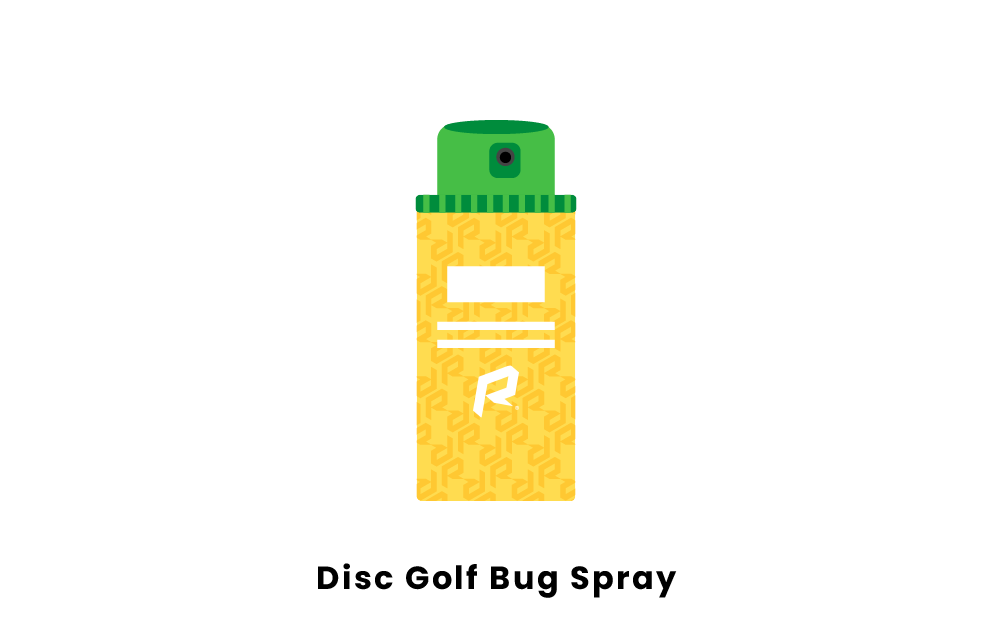 While not necessary, bug spray can be helpful to keep players safe while competing. Many disc golf courses are located in wooded areas that are full of insects. Therefore, bug spray can help players prevent pesky bug bites that may distract and interfere with their game. 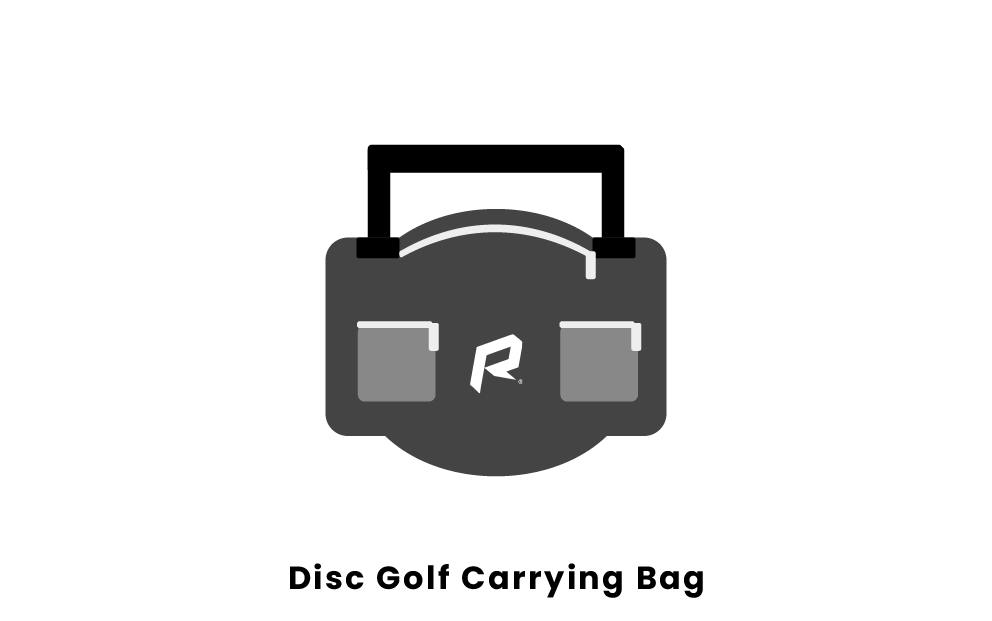 While travelling throughout a disc golf course, it is helpful to have a carrying bag to hold discs used in the sport. Although a simple backpack can be used to carry discs and other equipment, a specialized disc carrying bag allows players to keep their discs organized so they can easily retrieve them. A carrying bag usually contains different sections for drivers, mid-range discs, and putters. The bag may also have room to store additional items such as water bottles and towels. Common carrying bags come in the form of either a backpack or over the shoulder bag, with a backpack usually having more storage room. Depending on the size, the bags can hold anywhere from 6 to 30 discs. An affordable bag will cost between $15 and $40 while more expensive bags will cost around $100. 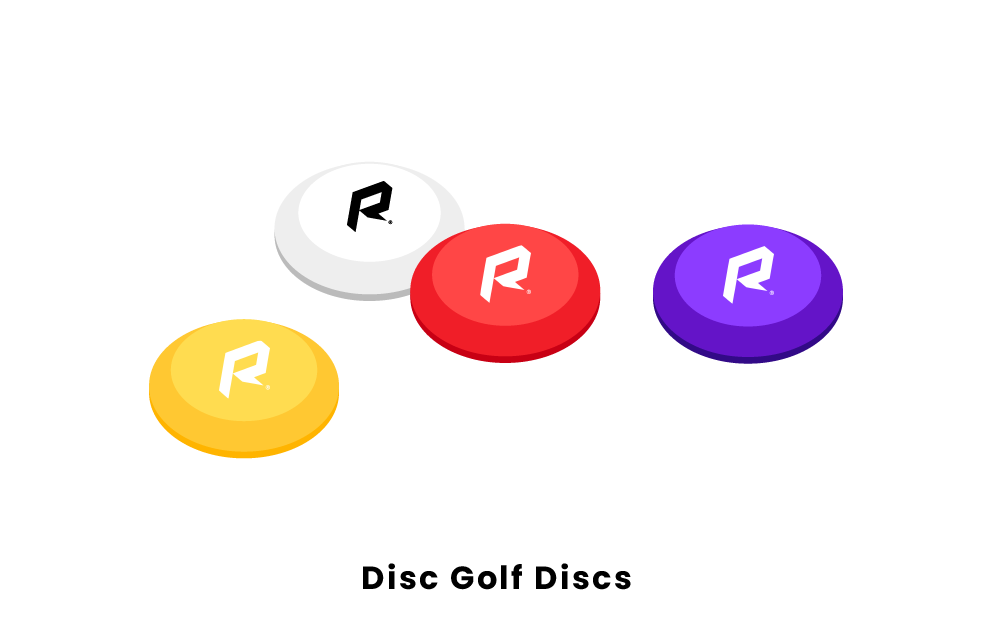 Disc golf discs are a necessity when playing the sport. In disc golf, the discs are thrown towards the basket on each hole with the goal to make it in the basket in the least amount of attempts. The specialized discs are generally broken up into three categories including drivers, mid-range discs, and putters. Similar to regular golf, the driver discs are used for long distance throwing, the mid-range are used for intermediate distance, and the putters are used for close range throwing. Discs can be purchased either in a set or individually and each disc costs around $15 but can vary depending on the type of disc and its quality.

In addition to the different types of discs, discs are usually given flight ratings to describe different styles and how the discs will fly. Flight ratings vary depending on the disc manufacturer but the commonly used ratings are made on four elements including speed, glide, turn, and fade. The speed rating describes the amount of power required to throw the disc the desired distance. A driver disc will have a higher speed rating while putters have lower speed ratings. The glide rating describes how long the disc will float through the air, with a higher rating indicating the disc will stay in the air longer. The turn rating describes which way a disc will fly when thrown. A turn rating of 0 means that the disc will fly in a straight line while a negative turn rating means the disc will fly to the right and a positive rating means it will fly to the left. Finally, the fade rating indicates the likelihood of the disc to curve in the opposite direction of its initial curve (e.g. curving to the right after curving to the left initially). A high fade rating means that the disc is likely to curve back in the opposite direction. 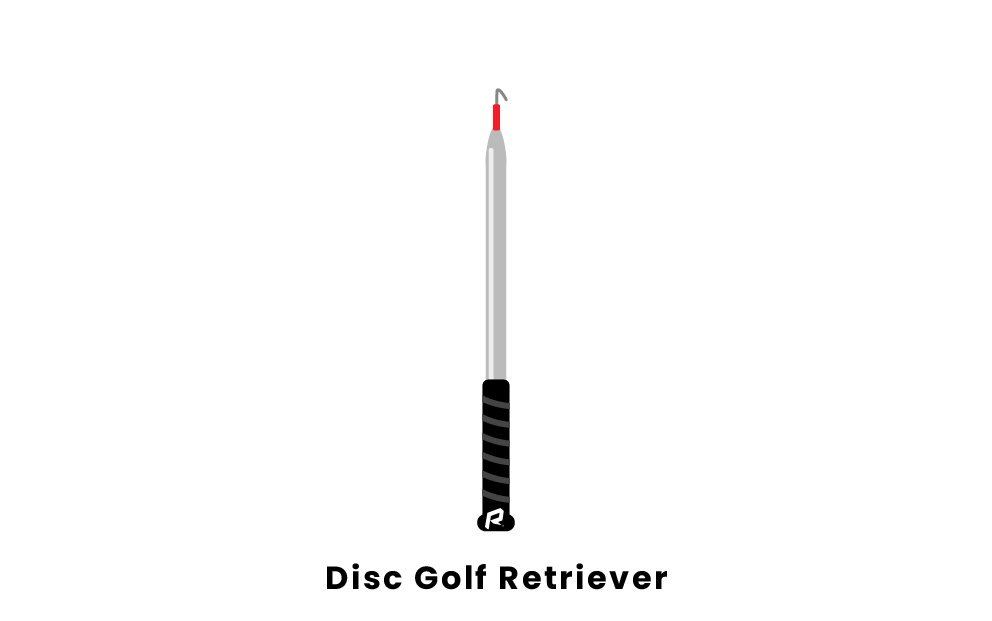 A disc golf retriever is a helpful piece of equipment, especially for courses that have a body of water that discs may land in. Even after a rainstorm, flooding can cause problems for players. Having a disc golf retriever on hand allows players to get their discs out of the water without getting wet. This saves players the hassle of losing discs and having to buy new ones afterwards. 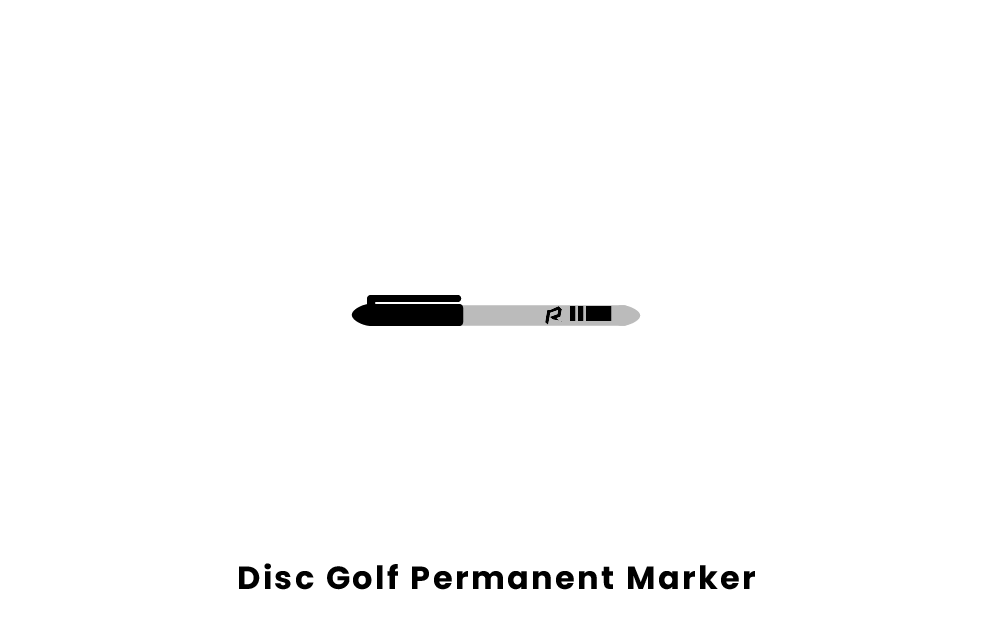 A permanent marker can be helpful when playing disc golf and can have several uses. When playing with others, a player can use a sharpie to mark discs to keep them separate from the discs of other competitors. A marker can also be used to mark on a disc when a player scores an ace or a hole-in-one. Finally, a permanent marker can be used to draw the flight path on the bottom of each disc to assist players when practicing. 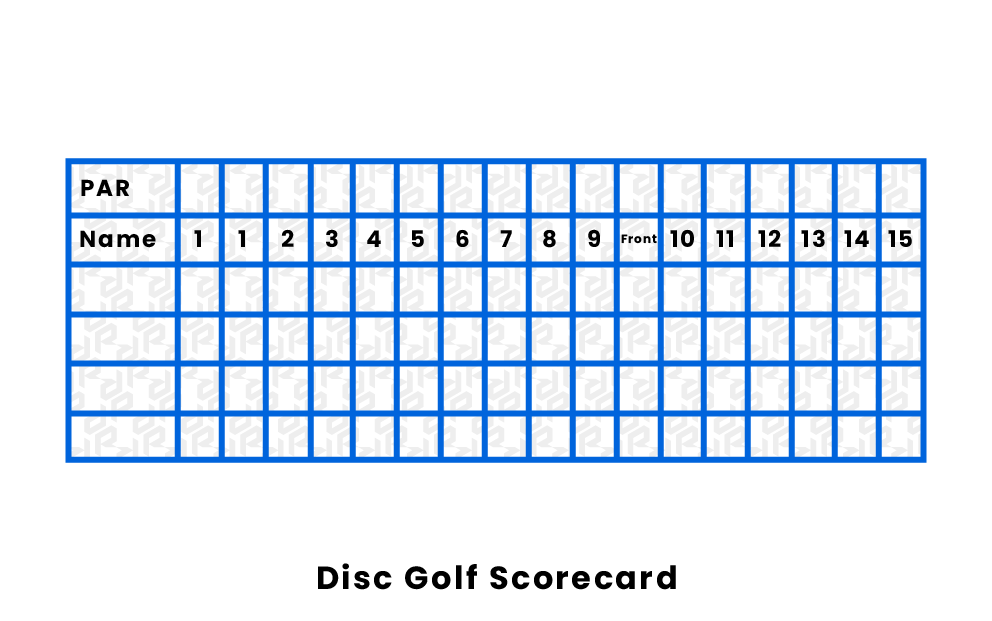 When playing disc golf competitively, it is good to keep a scorecard on hand. This allows players to easily keep track of their score along with the scores of other players in an organized manner. Additionally, scorecards can help players track their progress from round to round so that they can set goals for themselves. 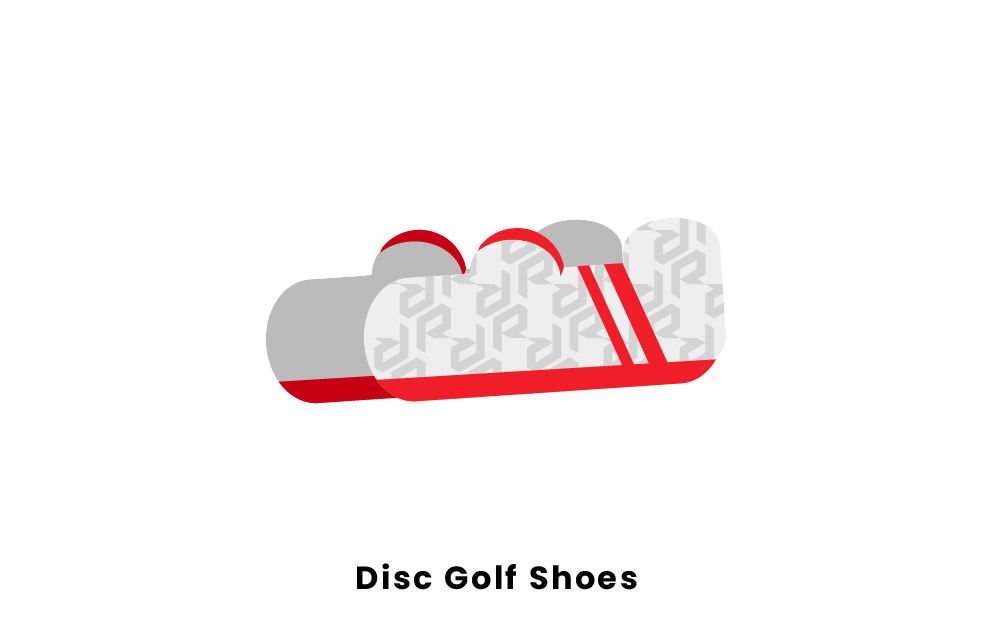 Although they may not be considered the most important piece of equipment, a good pair of shoes can help increase a disc golf player’s performance. Since the game is played outdoors, it’s important that players wear shoes that are durable and can withstand various elements, including rain, snow, and mud. In addition, players create leverage by planting their feet on the ground and pushing off when making throws. Therefore, it is important that the footwear has sufficient traction to give players adequate footing when throwing. Furthermore, the shoes should be comfortable and lightweight as players need to walk around the course throughout the duration of the competition. A few of the most popular footwear brands worn by disc golf professionals include Adidas, KEEN, Merrell, and Salomon. The price of disc golf footwear varies based on the brand and design but is comparable to other athletic and hiking sneakers. 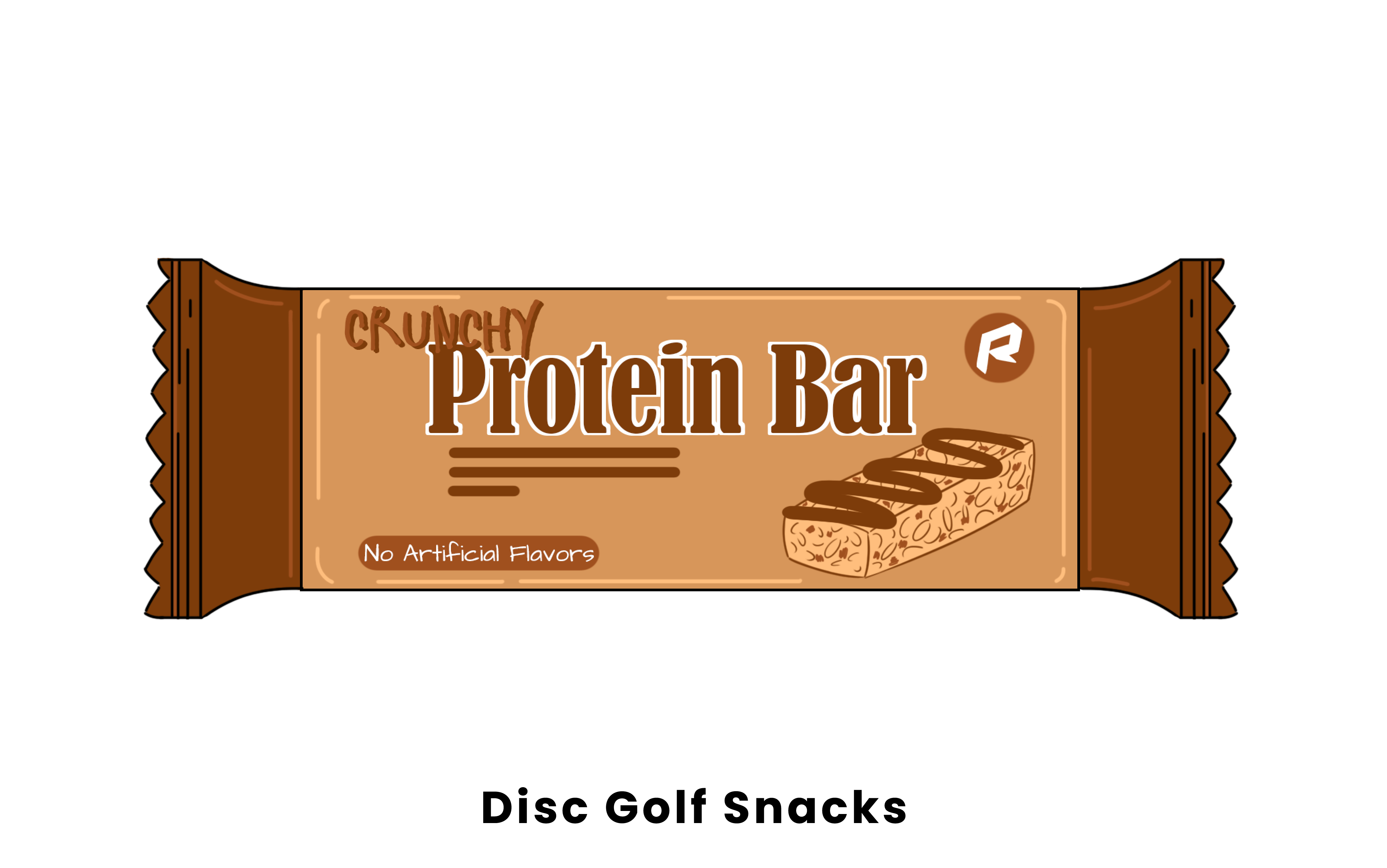 To keep energized on the course, disc golf players should carry snacks in their bags. Generally, it is best to keep non-perishable snacks in the bag that will not go bad throughout the day. Some easy snacks that players often bring include trail mix, granola bars, beef jerky, and sunflower seeds. 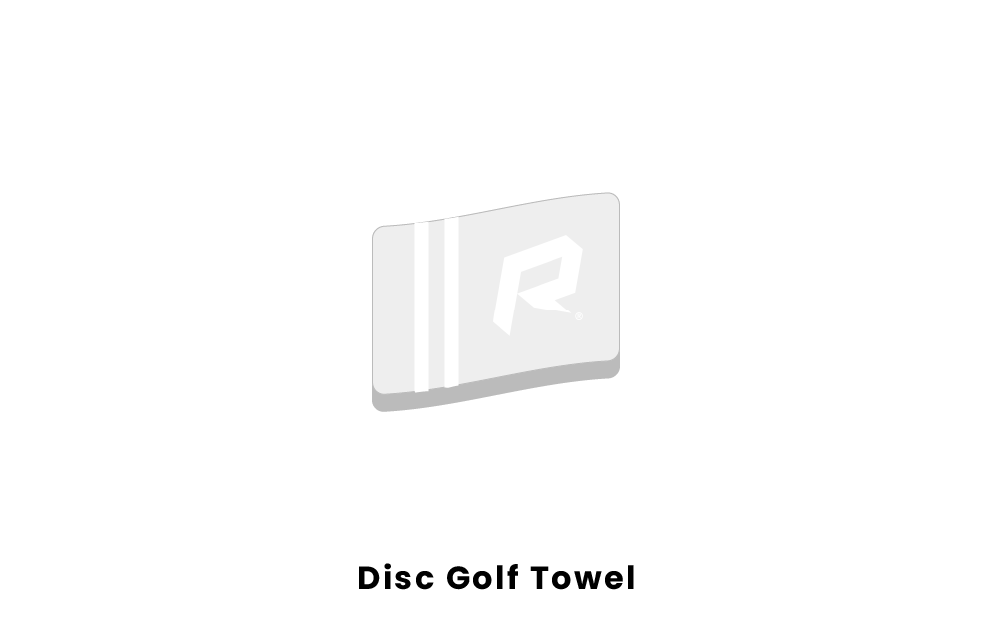 A towel is another helpful piece of equipment to carry when playing disc golf. Depending on the type of terrain and weather conditions, discs can become wet and muddy. Additionally, players often get their hands wet or dirty when playing, which can affect their performance. Therefore, a towel can be used to wipe off discs and hands to keep the player clean, dry, and keeping weather elements from affecting performance. 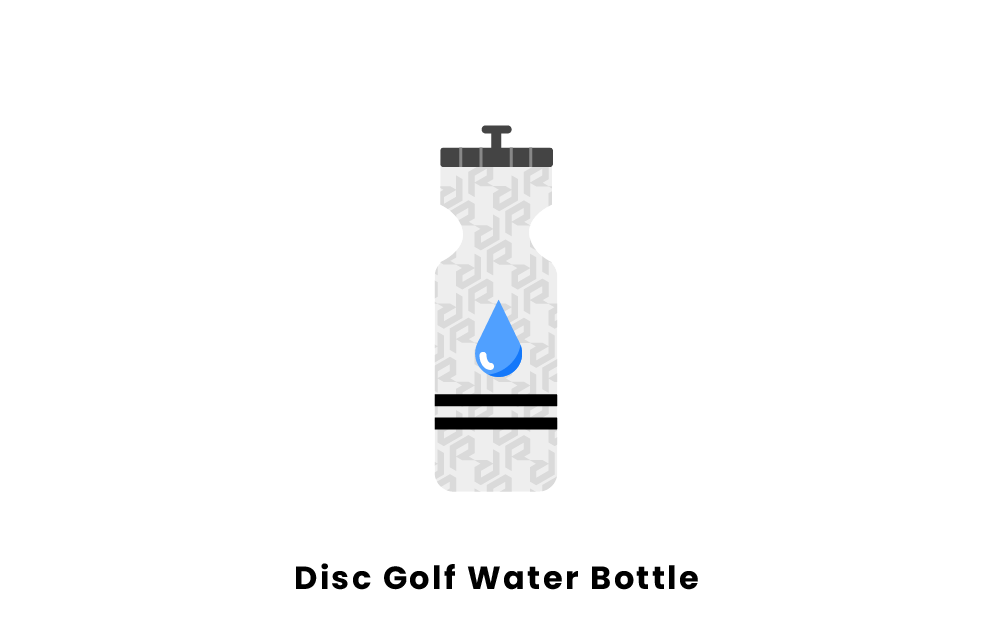 Like many other sports, having a water bottle is helpful to have when playing disc golf. As players compete and walk through the course, it is important that they remain hydrated so that they can perform to the best of their abilities. While the type of water bottle is not as important, it can be helpful for players to have insulated bottles that will keep their water cold throughout the duration of a competition.