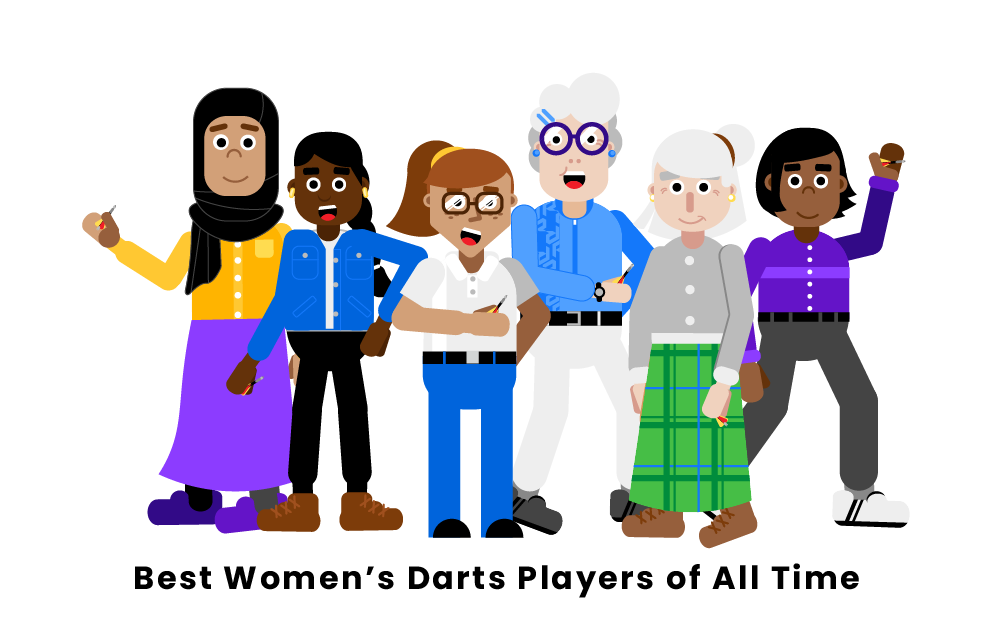 For most people, darts is just a fun game to play at the bar or the pub. It’s not taken too seriously, and many players don’t even know exactly how scoring works other than trying to hit a bullseye. However, the world of professional darts is a whole different story. Competitions are held year-round in countries across the world, and it’s a tough battle to come out on top. There are two main darts leagues: the British Darts Organization (BDO) and the World Darts Federation (WDF). To learn more about the top six best women’s darts players of all time, keep reading below.

Who are the best women’s darts players of all time?

Fallon Sherrock is the best women’s darts player of her generation, and she is the best women’s dart player of all time. She has won two of the four BDO Majors, capturing the Finders Masters in 2015 and the World Darts Trophy in 2018. She has won over 40 titles in her career, but her most legendary accomplishment did not earn her a trophy. In 2019, Sherrock made history as the first woman to ever win a match at the Professional Darts Corporation (PDC) Championships, also going on to win her second match. She lost her third match and was knocked out of the tournament, but since then, she has had tremendous success in the various PDC Majors, advancing all the way to the quarter-finals of the Grand Slam in 2021.

When looking at career accomplishments, there are few women’s darts players more decorated than Lisa Ashton. She has won 12 BDO Majors, including multiple titles in each of the four events, a total that is second all-time in the sport. In addition, Ashton won 60 different darts titles over the course of her career, and she has been exceptionally successful in PDC Women’s competitions. Ashton won two PDC Women’s Series in 2020, then returned to win five in 2021. 2022 has been a monster year for her, as she already owns seven Women’s Series titles.

Mikuru Suzuki has had by far the most interesting career of any woman on this list. She began playing darts in her home country of Japan in her early twenties, competing in numerous soft-tip tournaments. Suzuki was elite, and for many years she won various competitions across Asia. In 2016 at the age of 33, she finally joined the BDO, and she has had immediate success. She won her first BDO World Championship in 2019, and she came back the following year to repeat as champion. Since then, Suzuki has also won three international titles, winning the Dutch Open in 2019, a PDC Women’s Series title in 2021, and the West Japan Cup in 2022.

When it comes to career titles, the absolute queen of the women’s darts world is Deta Hedman. With 115 wins to her name, Hedman is the second-most winningest women’s darts player ever. She has had an up and down career that has featured top rankings as well as periods of absence. She took the world’s number one ranking in 1994 and was women’s darts best player until 1997 when she had to retire to focus on other work. However, Hedman returned in 2002, and in 2005 she became the first woman ever to defeat a man in a televised PDC event. She has won four BDO Majors in her career and also won the Women’s PDC Desert Classic in 2002.

Competing from 1993-2020, Trina Gulliver is one of the most accomplished women’s darts players ever. She has won 18 BDO Majors, the most of any woman ever, and has 119 career tournament titles, also a women’s record. From 2001-2007 she won seven straight BDO World Championships and won five of the six BDO World Masters from 2000-2005. In the Women’s PDC, Gulliver captured first place in the Desert Classic twice, repeating as the top player in 2004 and 2005.

The final woman on this list, Anastasia Dobromyslova, is one of the world’s greats in women’s darts. She has won eight BDO Majors, the third-most of any woman ever, and was also one of the first women to compete with men in the PDC regularly. Dobromyslova has 34 career titles, winning her first event in 2005. Dobromyslova nearly completed the darts Grand Slam in 2014 when she won three of the four majors, but in a cruel twist of fate, the one major she failed to win was the World Championships, which she had won in each of the prior two years.

Who is the greatest women’s darts player of all time?

The greatest women’s darts player of all time is Fallon Sherrock. With two BDO Majors and 47 career titles, there’s no question Sherrock is one of the most talented women ever to pick up a dart. She is most famous for becoming the first woman ever to win a match at the PDC World Championships when she did so in 2019. Sherrock also won her second-round match before getting eliminated in her third match, but her accomplishment resonates as one of the most impressive ever, nonetheless.

Who was the first woman to win a World Darts Championship Match?

Fallon Sherrock was the first woman to win a World Darts Championship Match. In 2019, Sherrock qualified for the PDC World Championships, entering the tournament alongside the most elite men’s darts players worldwide. She took on Ted Evetts in her first matchup and won 3-2. In the second round, Sherrock defeated Mensur Suljovic to advance to the third round. There, she was taken down 2-4 by Chris Dobey, but it remains a historic run.

Who was the first woman to ever qualify for the PDC?

The first woman to qualify for the PDC was Lisa Ashton in 2020. Though various other women have appeared in PDC events, Ashton became the first woman ever to earn a PDC Tour Card, allowing her to compete in all the same events as the men. Ashton is one of the greatest women’s darts players of all time but has also held her own in the men’s league, becoming the first woman to win a match at the UK Open since 2005 when she defeated Aaron Beeney in 2021.