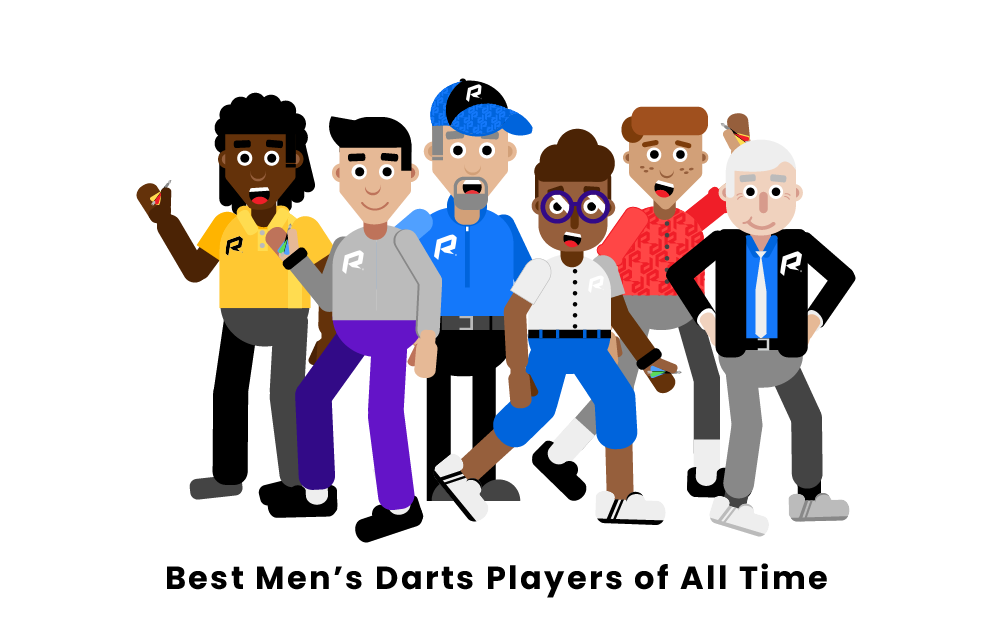 The game of darts requires focus, precision, and great hand-eye coordination. Many people view it just as something you play casually in your basement or at a local pub. However, those who excel at darts have the opportunity to play the sport at its highest level on televised tournaments. Here is a list of the top six best men’s darts players of all time.

Who are the best men’s darts players of all time?

Phil Taylor is recognized as the best men’s darts player of all time. He was born on August 13, 1960, in Stoke-on-Trent, England. Taylor’s professional darts career lasted 31 years, in which he played for two organizations. He first started in 1987 with the British Darts Organisation (BDO). Taylor’s career started off slowly, but he finally broke through in 1990, winning both the World Championship and World Masters tournaments. During his seven-year tenure with the BDO, he won a total of four major tournaments. In 1993, Taylor decided to shift his career and join the newly formed Professional Darts Corporation (PDC). His dominance in the PDC was unmatched. Taylor went on to win a record 14 PDC World Championships and dozens of more major darts titles. Throughout his career, he hit a total of 11 nine-dart finishes. Taylor is the only player in the history of men’s darts to hit two nine-dart finishes in the same match, which he did during the 2010 PDC Premier League Final. He decided to retire after 2017 as the most decorated professional men’s dart player of all time. After spending four years in retirement, Taylor has decided to continue his professional career in the 2022 World Seniors Darts Championship, for ages 50 and older.

Michael van Gerwen was born on April 25, 1989, in Boxtel, Netherlands. He is widely considered one of the best professional men’s darts players of all time. Van Gerwen joined the BDO in 2005 and stayed for three years. At the age of 17, he won the 2006 BDO World Masters tournament, making him the youngest player ever to win a major darts title. During the 2007 BDO Masters of Darts, van Gerwen became the youngest player ever to record a televised nine-dart finish. In 2008, van Gerwen switched from the BDO to the PDC, where he still plays. His run in the PDC has been more than impressive and includes 41 major darts titles. Van Gerwen’s most prominent accomplishments are three PDC World Championship wins and six PDC Player of the Year awards. He is tied with Phil Taylor for most Player of the Year awards ever won by a single player. Once he decides to retire, van Gerwen is guaranteed a spot in the PDC Hall of Fame.

John Lowe is viewed as one of the legends in professional men’s darts history and regarded as one of the key players who developed the sport’s popularity. He was born on July 21, 1945, in Derbyshire, England. Lowe competed professionally for 31 years between the BDO and PDC. Over his career, he won five major darts titles, including three BDO World Championship tournaments (1979, 1987, 1993). From 1986 to 1993, Lowe was the captain of England’s WDF team and went unbeaten during that stretch. Possibly Lowe’s most distinct achievement came in 1984 when he recorded the first-ever televised nine-dart finish. The fierce competition between John Lowe and Eric Bristow during the 1980s is what helped popularize the sport of darts at the professional level. It was only appropriate that in 2005 the formal rivals became the first two players inducted into the PDC Hall of Fame. Now retired, Lowe still competes on an exhibition circuit alongside other former professionals.

Eric Bristow is another legend of professional men’s darts who helped develop the sport professionally. He played during the same time period as John Lowe, and the two had a competitive rivalry. Bristow was born on April 25, 1957, in London, England. Bristow played 31 years professionally, spending time with both the BDO and PDC. He was most dominant when playing for the BDO from 1976 to 1993. Bristow was nearly unbeatable for a stretch, winning five BDO World Championship tournaments over the course of seven years (1980-1986). He was also known for having a charismatic personality, which resulted in him taking on a role as an expert pundit for Sky Sports coverage of PDC tournaments. Bristow’s biggest contribution to professional men’s darts may have not even come from his playing career. He took a young Phil Taylor under his wing and mentored him to be the best men’s darts player of all time. Bristow’s career achievements and impact on professional men’s darts were acknowledged when he was inducted into the PDC Hall of Fame’s first class in 2005.

Raymond “Barney” van Barneveld is one of the most successful darts players currently competing in the sport. He was born on April 20, 1967, in The Hague, Netherlands. Barneveld went pro in 1987, playing with the BDO. During his 20-year tenure, he won seventeen BDO majors, including four World Championship tournaments. Barneveld would later switch to the PDC in 2006, where he currently plays. His talent was immediately proven as he won the 2006 PDC UK Open and was awarded the 2006 PDC Best Newcomer. Barneveld has since added another World Championship win to his resume and a total of six major darts titles. He has impressively hit five nine-dart finishes, including the first ever nine-dart finish in a PDC World Championship during the 2009 tournament. Barneveld chose to retire from professional darts in 2019. His retirement was short-lived, as he decided to rejoin the PDC in December of 2021.

Gary Anderson is currently one of the top talents in professional men’s darts. He was born on December 22, 1970, in Musselburgh, Scotland. He went professional in 2000, joining the BDO. Anderson struggled at the start of his career but broke through by winning four BDO major darts titles in 2007 and 2008. In 2009 he decided to switch from the BDO to the PDC. This was a wise decision, as Anderson has since won two PDC World Championship tournaments and a total of eight major darts titles since joining. He has defined himself as a standout player in the PDC, winning the organization's 2015 Player of the Year award. Throughout his career, Anderson has completed three televised nine-dart finishes.

Who is the greatest men’s darts player of all time?

Phil Taylor is considered to be the best men’s darts player of all time. He has set himself apart from the pack by playing so consistently dominant throughout his career. Taylor was such a dominant player that the PDC inducted him into the Hall of Fame in 2011, long before his career was even over. His 16 World Championship tournaments and dozens of televised major darts title wins have solidified him as the best to ever compete.

What men’s darts player has the most 9 dart finishes?

Michael van Gerwen has the most nine-dart finishes in men’s darts history. He has successfully completed this difficult task 24 times throughout his career. In 2020, van Gerwen surpassed legend Phil Taylor’s record of 21. The level of concentration and precision required to complete a nine-dart finish is immense, with many pros going their entire career without completing it once. Van Gerwen accomplishing this feat 24 times at men’s darts’ highest level is astounding.

Who has the most World Darts Championship titles?

Phil Taylor has won the most World Darts Championship titles, with 16 across the BDO and PDC. He won his first two with the BDO, then the final fourteen with the PDC. Taylor’s first world championship came in 1990, and he won his final title in 2013. Winning the highest stakes tournament across three decades attests to how consistent he was able to remain throughout his career. Taylor’s 16 World Darts Championship titles far surpass the 2nd highest mark, which is a tie at five between Raymond van Barneveld and Eric Bristow.