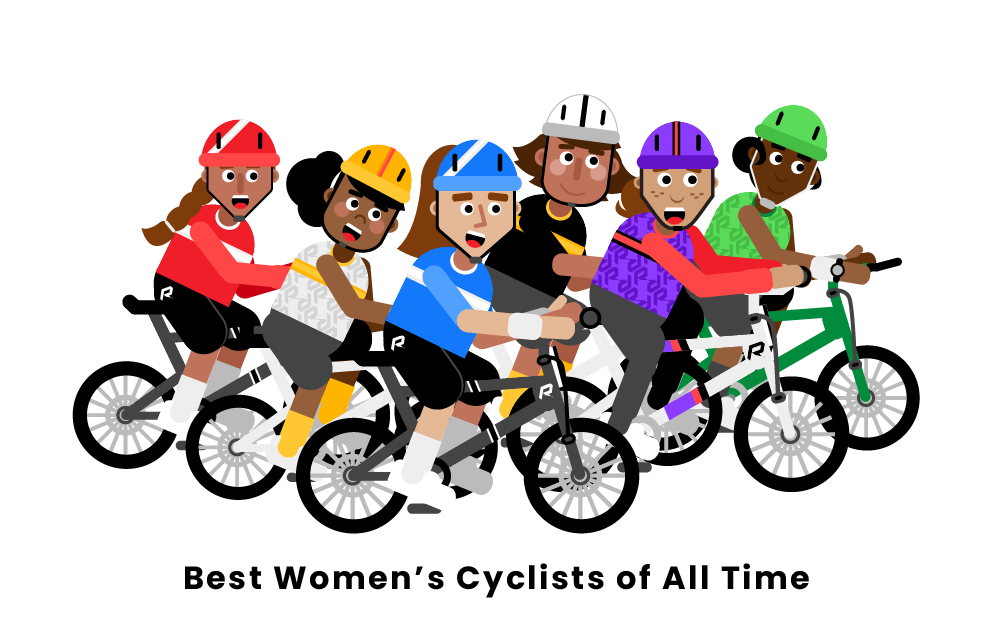 Women’s cyclists are some of the most dedicated and committed athletes on earth. Driven by determination and love of the sport, they push on, racing for glory. Here is a list of the top six best women’s cyclists of all time.

Who are the best women’s cyclists of all time?

Italian cyclist Fabiana Luperini is the only rider to win the Giro d’Italia Femminile five times. One of the best cyclists of the modern era, she was known for her abilities as a climber and her strong competitive spirit. The daughter of an amateur racer also known for climbing, she grew up in the hills of Tuscany and started road cycling at age seven. Luperini won her first race in the Giovanissimi category, then notched several more junior wins before going pro at 19. The next year she won her first major title at the Trofeo Alfredo Binda – Comune di Cittiglio. Starting at age 21, Luperini won four consecutive Giro Rosas, taking home three consecutive Grandes Boucles Féminines during the same period, a performance which has not been matched.

The best all-around road cyclist of her era, Anna van der Breggen excelled at both stage races and one-day classics. A competitive juggernaut in the late 2010s, she won the Giro d’Italia Femminile four times and La Flèche Wallonne an incredible seven times straight. Van der Breggen grew up in a cycling family in Zwolle, Netherlands. She started racing at age seven and was competitive in the juniors category. At 22, she turned pro, winning the Tour de Bretagne Féminin and being selected for the 2012 World Championship team in her first season. After recovering from a crash in 2014, van der Breggen went on a championship run, bringing home a road racing Olympic gold in addition to her Giro Rosa and Flèche Wallonne titles.

A British cycling hero, Nicole Cooke was the youngest ever winner of the Giro d’Italia Femminile and the first British woman to win an Olympic gold medal in cycling. She was also the first British woman to win a UCI World Cup and be ranked #1 in the world. Cooke grew up in a small town in Wales and started cycling at 11. She won the British National Road Race Championship at 16; the next year, she took the title at the British National Cyclo-cross Championships, becoming the youngest rider to win either title. Cooke went on to a brilliant international career, winning three Flèches Wallonnes, two Grandes Boucles Féminines, and an Olympic gold medal in road racing.

Known as the boss of women’s cycling, Ina Teutenberg has followed a prolific racing career with a prominent post in cycling management, serving as head sports director for Trek-Segafredo. She has over 200 wins to her name, including the 2009 Tour of Flanders and 11 Giro Rosa stage victories. Teutenberg was also a member of the 2012 World Team Time Trial Championship team. She was born in Düsseldorf, West Germany, and started racing at age six alongside her two brothers. At 16, she won the Junior World Championships in road and track. Teutenberg raced professionally for 13 years, excelling at sprints and prologues and proving to be an indispensable teammate and leader.

A pioneer of modern women’s cycling, Petra Rossner had a long and successful career racing in both track and road disciplines before becoming a cycling coach. She grew up in Leipzig, Germany, where she played track and field, not taking up cycling until age 19. One year later, in 1987, she competed in the Road World Championships. That same year she won the International Thuringia Tour of Women, which was the second women’s stage race ever. Rossner had her biggest successes in track racing, winning a World Cup Championship in the 3km pursuit in 1991 and Olympic gold in the same event in 1992. She raced until 2004 when she retired and moved to management, coaching teams like Team Nürnberger and Canyon/SRAM.

Who is the greatest women’s cyclist of all time?

Marianne Vos is the greatest women’s cyclist of all time. The longevity of her career and the level of dominance and accomplishment achieved in every discipline of competitive cycling is unmatched. Over a career spanning more than 20 years, she has won championships in road racing, track cycling, cyclo-cross, and mountain biking. Vos has Olympic gold medals in both track and road events, three Giro Rosa wins, as well as a record of eight World Cyclo-cross titles.

Who has the most Tour de France Femmes wins?

Jeannie Longo, Fabiana Luperini, and Joane Somarriba are tied for the most Tour de France Femmes wins, at three titles apiece. Jeannie Longo won her Tours consecutively, starting in 1987. Fabiana Luperini also earned consecutive victories, starting in 1995. Joane Somarriba won her first two Tours in 2000 and 2001, then returned in 2003 for her third title. During its history, the Tour de France Femmes has also been called the Women’s EEC Tour and the Grande Boucle Féminine.

British cyclist Joscelin Lowden holds the women’s cycling hour record, at 48.405km. She set the record on September 30, 2021, at the Velodrome Suisse in Grenchen, Switzerland. Lowden made her official run after putting down a record-breaking training distance of 48.160km the preceding February. The previous record-holder was Italian Vittoria Bussi, who recorded a distance of 48.007km in 2018. Lowden’s run also broke an absolute record set by Jeannie Longo in 1996 using a now-banned aerodynamic position.

Pages Related to Top 6 Best Women's Cyclists of All Time