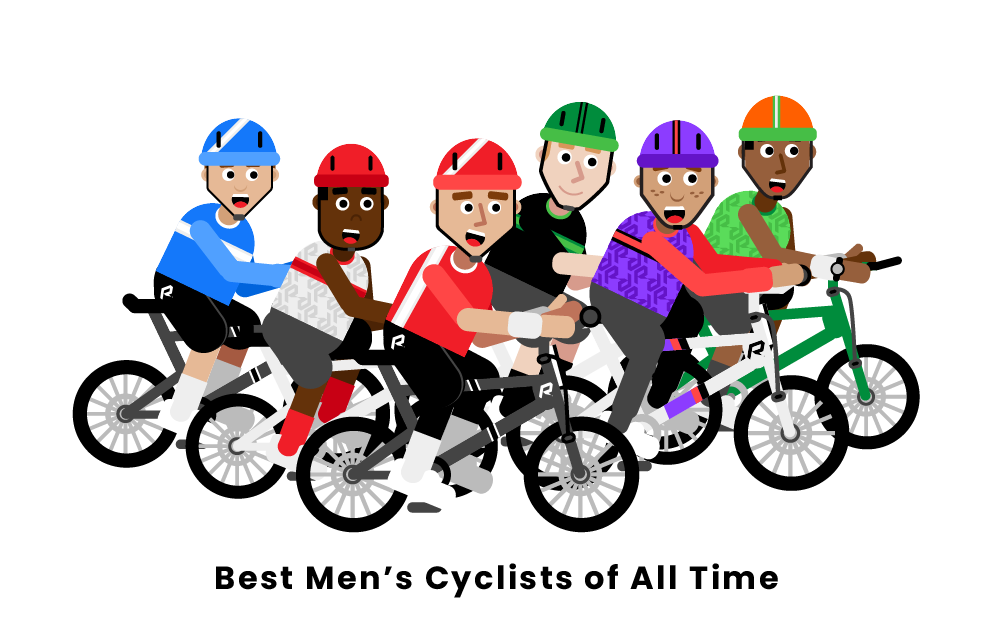 Cycling is one of the most athletically challenging sports in the world, requiring extreme endurance, speed, balance, and motivation. Being considered one of the best of all time is no easy feat. These six men have earned the title of one of the greatest cyclists of all time due to their accomplishments in the sport and consistency throughout their careers.

Who are the best men’s cyclists of all time?

Eddy Merckx is a Belgian cyclist born on June 17th, 1945, in Meensel-Kiezegem, Belgium. During his highly decorated career from 1965 to 1978, Merckx won races in all of the biggest competitions throughout the world, including five victories in the Tour de France. By his retirement, Merckx had accomplished an astounding 445 victories in 1885 races, making him arguably the greatest men’s cyclist of all time and earning him the nickname “The Cannibal.” Merckx also broke many world records during his career, including the record for most distance covered in a one-hour ride.

Lance Armstrong is an American cyclist born on September 18th, 1971, in Plano, Texas. Armstrong is arguably the most popular and well-known cyclist of all time during his whirlwind of a career which began in 1992 and lasted until 2011. Lance Armstrong collected the most Tour de France victories of all time (seven consecutive from 1999 to 2005). All of these victories came after Armstrong’s biggest battle and victory, where he beat cancer in 1998. Sadly, Armstrong was stripped of all his Tour de France victories in 2012 for an ongoing PED investigation and scandal.

Sean Kelly is an Irish cyclist born on May 24th, 1956, in Carrick-on-Suir, Ireland. During his highly accomplished career from 1977 to 1994, Kelly secured victories in almost every main cycling competition, including seven Paris-Nice first place finishes and a total of 188 victories. Kelly also held the world No. 1 ranking for six years before becoming the inaugural winner of the UCI Road World Cup in 1989. The only piece missing from Kelly’s resume is a victory in the Tour de France due to his struggles in the high mountains.

Miguel Induráin is a Spanish cyclist born on July 16th, 1964, in Villava, Navarra. During his highly decorated career from 1984 to 1996, Induráin achieved five victories in the Tour de France, two victories in the Giro d’Italia, and over 20 major cycling victories. In 1993, Induráin was 19 seconds off a first-place finish in the World Championship, a victory that would have made him just the third ever to win cycling’s triple crown. His five Tour de France victories are tied for the most all-time, and he is the only athlete to ever win them in consecutive years (not including Armstrong’s seven stripped victories).

Chris Froome was born on May 20th, 1985, in Nairobi, Kenya, before moving to South Africa when he was 14 years old. He began his professional cycling career in 2007 at the age of 22 and remains an active professional cyclist today. Froome’s career took off a few years when he won the Tour de France in 2013 and then again in three consecutive years from 2015 to 2017. In 2019, Froome suffered a serious training crash that resulted in multiple bone fractures, including his femur and pelvis. Froome is continuing his road to recovery as he looks to return to the top of the cycling world soon.

Fausto Coppi is an Italian cyclist and one of the earliest all-time greats in the sport. He was born on September 15th, 1919, in Castellania, Italy. In 1940, Coppi started his career with his first Giro d’Italia victory, making him the youngest ever to win the race at the age of 20. His early career was then put on pause for the second World War, and he would return to racing in 1946. Coppi found most of his career’s success after the war, which included four additional Giro d’Italia victories and two victories in the Tour de France.

Who is the greatest men’s cyclist of all time?

Most supporters of cycling agree that Eddy Merckx is undoubtedly the greatest cyclist of all time. He has the most professional victories and is tied for the most official Tour de France and Giro d’Italia victories, with five in each race (not including Armstrong’s seven stripped Tour de France wins). Merckx’s sheer ability to win earned him the nickname “The Cannibal” and is one of two cyclists ever to win cycling's triple crown.

What men’s cyclist has the most Tour de France wins?

Lance Armstrong achieved seven consecutive Tour de France victories from 1999 to 2005, making him the all-time leader in Tour de France wins. However, all of these victories were stripped from his record in 2012 after an ongoing investigation into Armstrong’s usage of PEDs. Not including Armstrong’s stripped victories, there is a four-way tie for the most Tour de France wins between Eddy Merckx, Miguel Induráin, and French cyclists Jacques Anquetil and Benard Hinault, all with five wins.

Which men’s cyclist has won the most UCI Road World Championships?

There is a five-way tie for the most UCI Road World Championships wins between Eddy Merckx, Alfredo Binda, Rik Van Steenbergen, Óscar Freire, and Peter Sagan, all with three gold medals in the competition.

Pages Related to Top 6 Best Men's Cyclists of All Time