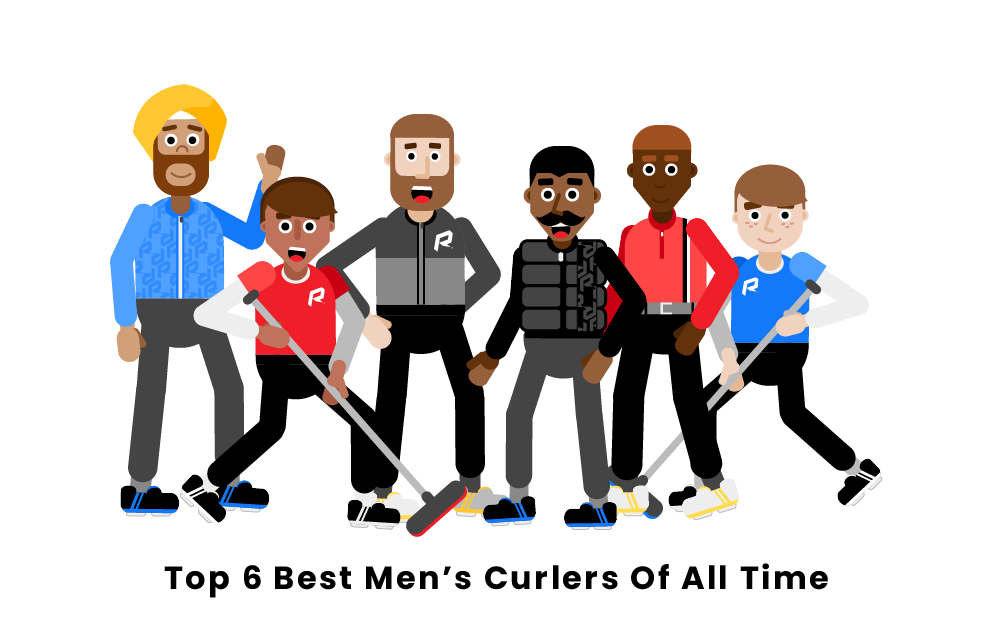 Curling is a team sport played on ice, in which two teams take turns sliding granite stones towards a target, better known as the house. While one player slides the stone, their teammates use broomsticks to sweep the ice surface. This warms the ice and allows the stone to travel further. The sport originated in Scotland during the 16th century and became part of the Winter Olympics in 1924.

Who are the best men’s curling athletes of all time?

At the Vancouver Olympics in 2010, Kevin Martin led team Canada to an undefeated record to capture the gold medal. Martin’s squad was the first to accomplish that feat in 86 years. Martin also won four championships at the Brier, Canada’s annual men’s curling championship, including back-to-back victories in 2008 and 2009. His Olympic resume is equally impressive, with a gold and silver medal to his name, as well as the distinction of holding the record for the most Olympic wins by a skip. Known as “The Old Bear” or “K-Mart,” he is widely regarded as Canada’s greatest male curler.

Nobody dominated the sport of curling for a moment in time quite like “The King.” Ernie Richardson played alongside his brother Garnet Richardson and cousins Wes and Arnold Richardson for most of his career. He was the skip of one of the greatest men’s curling teams ever, winning the world championship in 1959, 1960, and 1962. However, in 1963, Wes had back problems, leaving him unable to compete in that year’s championship. Ernie persevered and still won with Mel Perry as the replacement for his cousin. Ernie unfortunately never got to compete in the Olympics because the sport was not included during his career. However, he was presented with the Order of Canada in 1978 for his contributions to curling.

Almost every great player needs a strong sidekick. For Kevin Martin, it was Mark Kennedy. Kennedy was Martin’s number-two when the squad captured consecutive Canadian Brier’s in 2008-2009 and won gold in the 2010 Winter Olympics. He is truly a great player in his own right. Kennedy can play the draw, the big-weight hit, and is also regarded as a very good sweeper. He has competed in three Olympic Games and is an alternate for Team Gushue in February 2022 at the Beijing Games.

John Shuster has represented Team USA at the Olympics four times over his illustrious career. In his first three tries, he only reached the podium one time, receiving a bronze medal in 2006. However, in 2018 Shuster finally captured the gold medal as he led his team to a 10-7 victory over number-one ranked Sweden. “Shoostie” was a curling prodigy in his home state of Minnesota. He won the State High School Curling Championships in 1999, followed by two 1st-place finishes at the State Junior Championships in 2002 and 2004.

John Morris was another valuable piece to Kevin Martin’s team during their dominant run in the late 2000s. At the 2008 Canadian Brier, Morris played with a broken finger, yet he still managed to win MVP of the tournament courtesy of his finals performance. He is also the only member of the outstanding 2010 Canadian Olympic team to win multiple gold medals. He accomplished this feat in 2018 when he teamed up with Kaitlyn Lawes to win the Mixed Doubles gold at PyeongChang.

Glenn Howard began his career playing behind his brother, Russ Howard. The two won the 1987 and 1993 Briers and captured the inaugural Players’ Championship in 1993. Glenn finally formed his own team in 2000 and has never looked back. Alongside Brent Laing (second) and Craig Savill (lead), Howard won four straight Masters from 2006-2009, the 2008 Players’ Championship, and the 2009 Canadian Open as the team’s leader. In 2007, the team also won the World Championship. Impressively, Howard has won gold in all his World Championship appearances. Despite being the active leader in Grand Slams, he has never appeared in the Winter Olympics.

Russ Howard is a professional curler who, along with his brother Glenn, won multiple World Championships and major international tournaments. Howard won the Brier Championship two times in 1987 and 1993, and appeared in more Briers (14) and Brier matches (174) than any other player before him. He won two World Championships in his career, also in 1987 and 1993. On top of this impressive record, he won a gold medal with Canada at the 2006 Turin Winter Olympic Games.

Oskar Eriksson is a Swedish Olympic curler best known for his extensive Olympic track record. Most notably amongst his accolades is his status as the curler with the most overall medals in Olympic history with a total of four. His Olympic medals consist of a gold team medal in 2022, a silver team medal in 2018, and a bronze team medal in 2014, as well as a bronze mixed doubles medal in 2022. Along with his Olympic success, Eriksson is also a six-time World Curling Championships winner and a seven-time European Curling Championships winner. The fact of the matter is that, in the realm of curling, Oskar Eriksson is a certified winner in every regard.

Rasmus Wranå is a decorated professional curler from Sweden. He has enjoyed much success on the international level, winning four gold medals at the World Curling Championships and three gold medals at the European Championships. He also is accomplished at the Winter Olympic Games, capturing gold at Beijing in 2022 and silver at the Pyeongchang Games in 2018. Wranå also has won three Grand Slam events, winning the Masters and Tour Challenge in 2016 and the Players in 2017.

Who is the greatest men’s curler of all time?

Kevin Martin was the skip of one of the greatest Olympic teams in curling history, and is widely considered the greatest men’s curler of all time. In 2010, he led his team to an undefeated tournament en route to a 6-3 victory over Norway in the gold medal match. Martin currently holds the records in both Grand Slams (18) and wins by a skip in the Olympics (20). Since retirement, Martin has conducted various development camps for the sport and is a broadcast analyst for NBC.

What men’s curler has the most World Curling Championships gold medals?

Who is the oldest men’s curler to win an Olympic gold medal?

Pages Related to Top 6 Best Men's Curlers Of All Time