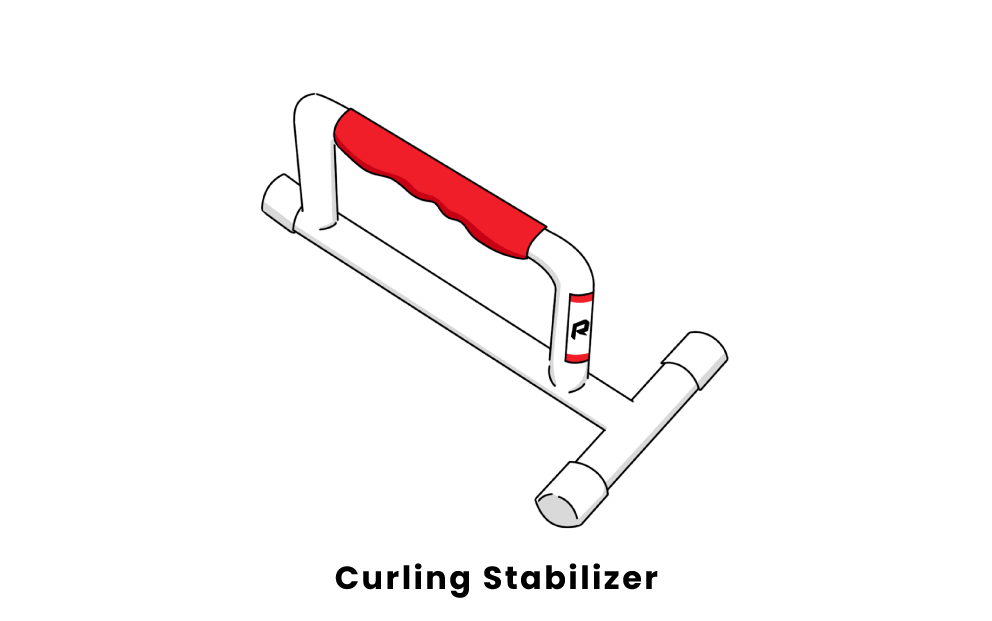 A stabilizer is used by curlers when they are delivering the stone so that they remain balanced while gliding on the ice. Stabilizers are usually made of some plastic or PVC material. There is a small horizontal piece on the front of the stabilizer.

What are stabilizers used for in curling?

The stabilizer in curling aims to improve a player’s delivery during a game. Also known as a curling crutch, the stabilizer helps to balance a player before they launch their rock. It keeps shoulders leveled and squared, so that a player may have a consistent curling delivery. In curling you’re playing on a sheet of ice, and “throwing” your rock from your end of the ice to the other.

“Throwing” a rock, is essentially pushing it along the ice proving to be a difficult task when it comes to consistency. Stabilizers provide a support of balance, making throwing a more manageable task. Stabilizers seek to improve players “throwing” form, and players rock transport.

Along with enhancing game play, stabilizers also take pressure off the player’s joints. In the long run, players will be grateful that a stabilizer not only aids in gameplay but aims to protect a players body.

Most curlers use their brooms to stabilize themselves when they deliver a stone. However, there is an alternative to the broom called the stabilizer. A stabilizer is a tool for all curlers to use.

Regardless of experience, stabilizers are used at all levels of the game. A stabilizer looks like a "T" on the bottom, with a rectangular handle on the long side of the "T". On the underside of the "T", there are small teflon strips or dots that allow the stabilizer to glide along the ice with the thrower.

When you are using a stabilizer, always make sure the short side of the "T" is in the front of the stabilizer. If it is in the back, your sliding foot may hit it, and you can slip during your delivery.

What are the best curling stabilizers?

The Goldline Scepter is a curling stabilizer. It is used by curlers to balance themselves as an alternative to a broom when throwing a stone. The Goldline Scepter is designed to be the exact same height as a curling stone. This allows the thrower to square their shoulders and make a more accurate throw. The Scepter is unique because it comes with collapsable parts—which make for easier travel or storage—and a foam hand grip, as well as a quality price of less than $60 USD. While other curling stabilizers are often made with a curved structure or are adjustable, the Scepter is always at the same height, keeping the hand bar parallel to the ice. The Scepter is the closest mainstream commercial model to a classic homemade stabilizer, which are usually made of plastic PVC piping. Finally, the Scepter’s lightweight frame makes it even easier to use and store conveniently.

The Arrow Curling Crutch (also known as the Arrow Curling Stabilizer) is a premium curling accessory used to maintain the stone thrower’s balance better than a traditional broom. This item is for serious or recreational curlers, but especially those with balancing problems. This product is useful for helping alleviate knee pain, but is also commonly used by those who just need a little extra balance. The Arrow Curling Crutch comes with a collapsible frame, a cushioned grip on the handle, and a slightly slanted build. This slant allows for a more natural hand position than a handle parallel with the ice. The Arrow Curling Crutch is also adjustable; this allows the thrower to change their preferences and tweak the angle of the stabilizer to fit their exact specifications. Different people are built differently, and different throwers have different needs, so it only makes sense to have a stabilizer that will adapt to yours!