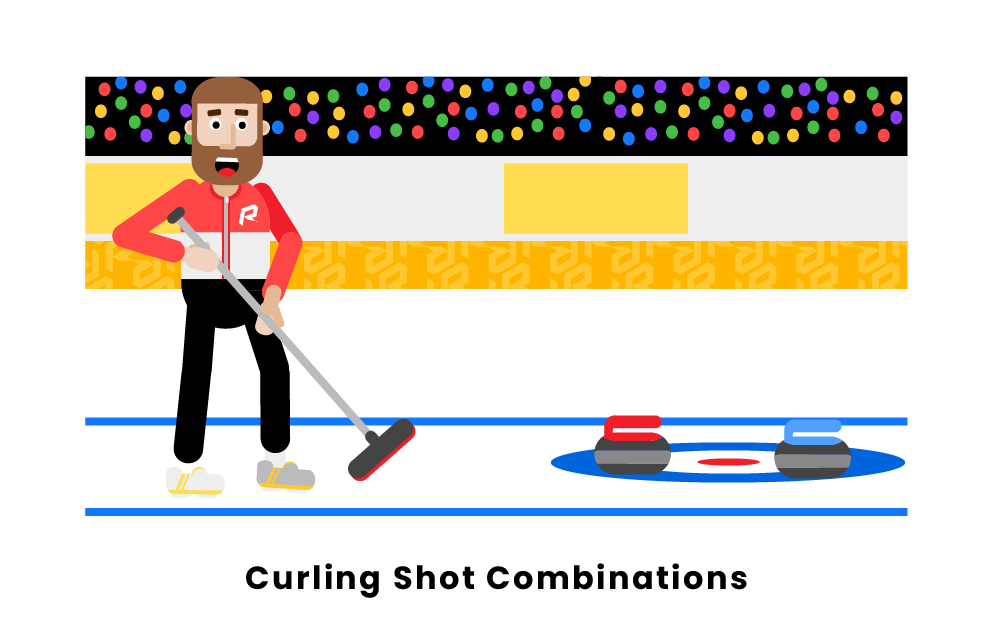 Now that we have learned about all of the different basic shots that can be executed in a game of curling, we can begin to expand our horizons and learn some more creative shot combinations. Usually, the above shots will provide enough opportunities for your team to score 2 or more points with the hammer, and force your opponent to 1 point when they have the hammer. However, there may be a scenario in which a more difficult shot must be made.

Since you already have learned about split times for the basic shots, we are confident that you will be able to apply them to the shots we will be learning about. This will also allow us to discuss the shot-making process a little more in depth.

Before we begin to learn about curling shot combinations, it is important that we understand the importance of angles when making shots.

If you are trying to hit a stone for a raise, takeout, peel, etc., it is important that you know where to hit the stone sitting on the other side of the sheet. In addition to the nose and corners of the stone, we will also use three more terms:

Based on the shots we previously learned about, there are some obvious combinations that can help your team score 2 points with the hammer or force your opponent to 1 point. We will walk you through a few of these combinations to give you an idea of some curling shot combinations.

For a Raised Takeout, you will be combining the shot of a raise and a takeout, specifically in that order. Raised Takeouts are useful if your team has a guard out in front of the house, or a stone in the front half of the 12 Foot. Let's take a look at the house below.

In order to execute this shot, it is best if we use our broom as a tool to determine where we need to hit each stone. We need the stone to leave the house at about a 30 degree angle with respect to the tee line, or about one-third of the stone. This means that we will hit the yellow stone rather thin. To ensure that the red stone hits the yellow stone, we need to hit about one-third of it. Now, we have a plan of action to execute the shot. If we look think back to our house now, we essentially made "invisible lines" between the stones that need to be hit.

If you are able to hit these stones on the correct angles, you will have successfully executed the raised takeout. Below, we included one more example of a Raised Takeout with the "invisible lines" for you to review on your own. 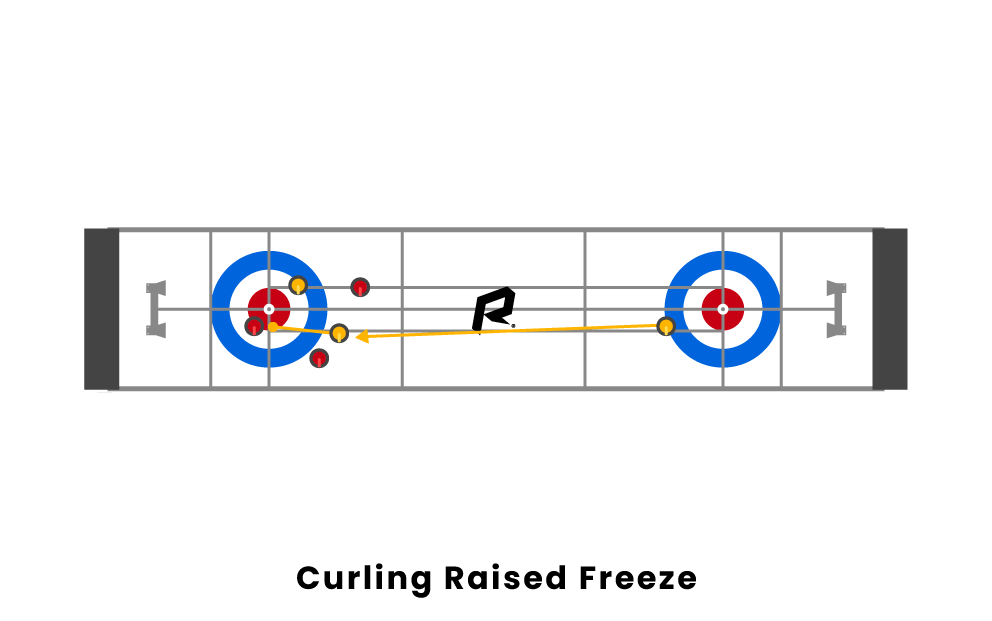 For a Raised Freeze, you will be combining the shot of a raise and a freeze, specifically in that order. Raised Freezes are useful if your team has a guard in front of the house, or a stone in the 12 Foot or 8 Foot that can be used to freeze on to an opponent's stone. Let's take a look at the house below.

If you are able to hit the red stone in the Top 8 Foot on the correct angle, along with the correct weight (about Back 4 Foot weight for this shot), you will be able to execute the Raised Freeze. Below, we included one more example of a Raised Freeze with the "invisible lines" for you to review on your own.

While we learned about two of the most common curling shot combinations, there are plenty others that have been performed before. Some of them include: