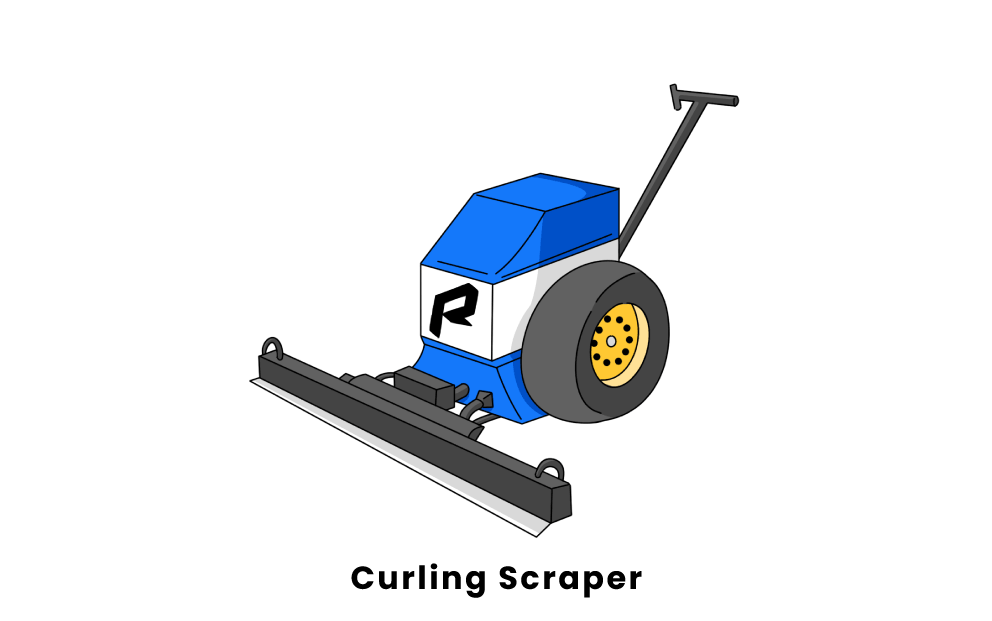 Before pebbling the ice, it is important to start off with a clean, flat surface. Some curling clubs decide to use a scraper. Other clubs may not do so. If you happen to play on arena ice, the zamboni driver may scrape the ice for you.

What is a scraper used for in curling?

A curling scraper is a tool used to ensure that the ice is level and suitable for play. Scrapers are key components in maintaining the ice and are used to remove excess ice fragments that tend to build up throughout the course of a curling event.

Parts of a Scraper

A scraper is a tool used to cut, or scrape, a flat and level ice surface. You will see scrapers used only on dedicated ice. Scrapers consist of three parts. They are the:

You will notice that the body on the scraper looks similar to that of the hood of a car. This is because there is a motor inside. The motor is connected to the wheels, which rotate at a speed defined by the user. Nowadays, most motors run on battery power. Previously, the motors would utilize pressurized hydraulic fluid.

At the end of the handle sticking out from the body of the scraper is a controller. This controller is usually located along the bar where the user will push the scraper. Here, the user can raise and lower the blade, rotate the blade left or right, and move the scraper forward or backward.

Most curling scrapers come with a number of accessories to increase the longevity of the tool. The most common accessory is a blade guard, which is placed over the blade whenever it is not being used in order to prevent the blade from becoming dull or rusting over.

Typically, the only people using scrapers at a curling club will be ice technicians. Therefore, it would be a waste of time to detail how to use a scraper. However, we will give you a basic idea of how to scrape.

First, test the blade just like you would with the nipper. Since the scraper collects the snow in front of the blade, check that there are equal amounts of snow across the blade. If so, the blade is level, and scraping can continue.

There are many different techniques and shaving patterns used to remove ice with a curling scraper. The most effective tactic is known as the “Holland Pattern” and involves pushing the blade diagonally across various spots within the playing area before running the machine several times over the midline. The midline step is particularly important and requires precision accuracy, as the midline is a reference point for players when guiding the curling stone. Failure to perform effective techniques such as the Holland Pattern results in high spots on the ice, which means certain portions of the playing area have more ice build-up than others. This prevents the ice from being level and may cause the curling stone to glide along the ice in unorthodox ways.

While there are smaller, hand-held scrapers that can be used to remove stubborn ice build-up along the boards of a curling rink, most curling scrapers are push-carts that rest on two wheels.

Attached to the cart is a handle for the operator to easily maneuver the scraping device, as well as a sharp blade encased by a metal frame. The blade is the most important part of the scraper and is designed specifically for ice removal, scraping ice off the playing surface without creating any significant scratches or cracks on the rink.