After an end is complete, the vices from each team will work together to agree upon the score. There are three general rules to know about scoring in curling:

As the vices work to score the end, they follow these two rules to determine the score:

It's okay if these rules seem vague now. We will work through an example so you can better understand how to apply these rules while watching or playing curling.

Consider the house below, with three yellow stones and one red stone.

If we consider the second rule above, we see that four stones are touching some part of the house. Therefore, those stones are the only ones that can earn their respective teams any points. If we consider the third rule above, the yellow team will have the potential to score up to three points, as they have three stones in the house. Similarly, the red team will have the potential to score up to one point, as they have one stone in the house. Before even beginning to start scoring the end, we have already narrowed down the maximum points that each team will be able to score. We will now walk through the steps required to score an end.

Step 1: Determine Which Stone is Closest to the Button

In curling, the stone that is closest to the button is called the "shot rock" or "shot stone." In the house below, the yellow stone in the four foot is the "shot rock". If we apply the fourth rule from above, we see that the yellow team will win the end and score a minimum of one point. 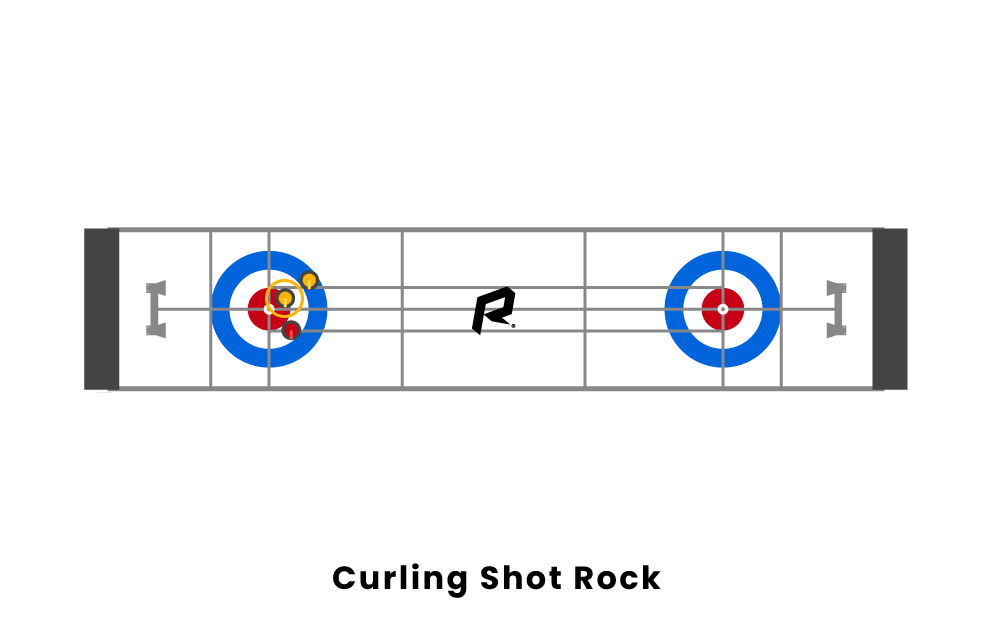 When determining if additional stones score, we find the stone that is second closest to the button or the "second shot" rock. In this case, it is the red stone, as shown below. If we apply the fifth rule from above, the red stone 'cuts off' any other yellow stones from scoring. Therefore, the yellow team will only earn one point for this end.

Step 3: Use Measuring Devices if Necessary

In some cases, it may be difficult to tell which of two stones is closest to the button. In this case, there is a measuring device for the vices to use, known as the micrometer. On the micrometer, a pressure gage measures which stone produces the higher reading (and is closer to the button). After measuring, the closer stone gets moved to the button, and the stone that is farther gets removed from the house.

Another measuring device available is a biter bar, which measures a stone that may be biting the 12 foot. The biter bar is six feet long - precisely the radius of the 12 foot circle in the house. If the edge of the biter bar makes contact with the stone, then it is in the house. By applying the second rule from above, a biter can be considered for scoring because it is touching some portion of the house. All scoring rules apply to a biter, just like all other stones in the house.