In curling, timing is one of the most crucial aspects of the game. Depending on the level of curling you participate in, the time of the game will be kept differently. There are two main ways to keep track of time in a game called:

Utilizing the thinking time method is the typical timing for any national or international curling event. Therefore, the thinking time method is used during ten end games for Men's and Women's teams, and during eight end games for Mixed Doubles teams. Before the game, a clock will be set for each team. At the Olympic level, this time is 38 minutes per team for Men's and Women's games, and 22 minutes per team for Mixed Doubles games. Notice that for eight end games, the thinking time is reduced by about 40 percent.

During the game, the clock for each team will begin to countdown once their opponent's stone comes to a stop. The team will then strategize, select their shot and begin to deliver it. As soon as the thrower pushes out of the hack, the clock will stop. Therefore, the time that the stone travels down the ice is not accounted for in any clock.

Note that time to set up in the hack is accounted for in the thinking time format. We now see the importance of the lead setting up the stone in the hack for the skip. In this timing method, every second matters.

The Importance of Thinking Time

If a team were to have no thinking time remaining on the clock, they would have to push out of the hack the instant that the opponent's stone stops. Achieving this is impossible because it takes time to complete the delivery portion before pushing out of the hack. Therefore, the team can no longer deliver anymore stones. Thus, the opposing team will be able to deliver the remainder of their stones and defeat the team that ran out of thinking time. 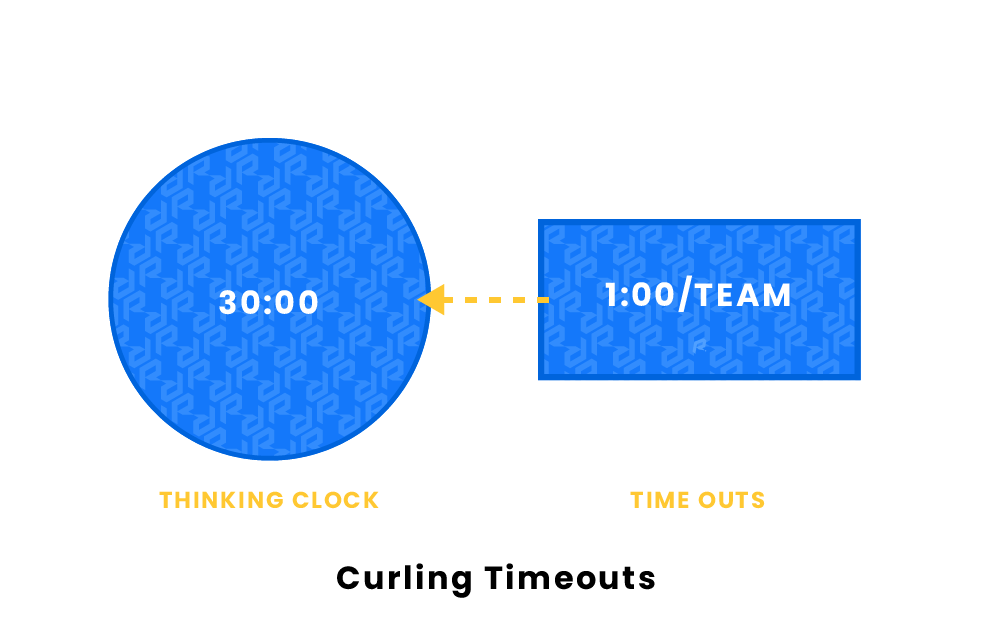 In this format, one timeout is allotted for each team to use at any point they desire during the game. Typically, the timeout is reserved for the later parts of the game, usually during the eighth, ninth, or tenth ends for a ten end game. In an eight end game, the timeout is usually used in the sixth, seventh, or eighth ends.

An advantage of the thinking time method is that each team is allotted an equal amount of time to think about their shots.

In the predetermined timing method, teams may disproportionately utilize time for thinking about their strategy.

The thinking time method also allows teams to use the time however they want. For example, most teams can strategize fairly quickly in the first part of the game, but want to take more thinking time in the later ends. If you run out of thinking time, you have to forfeit the match.