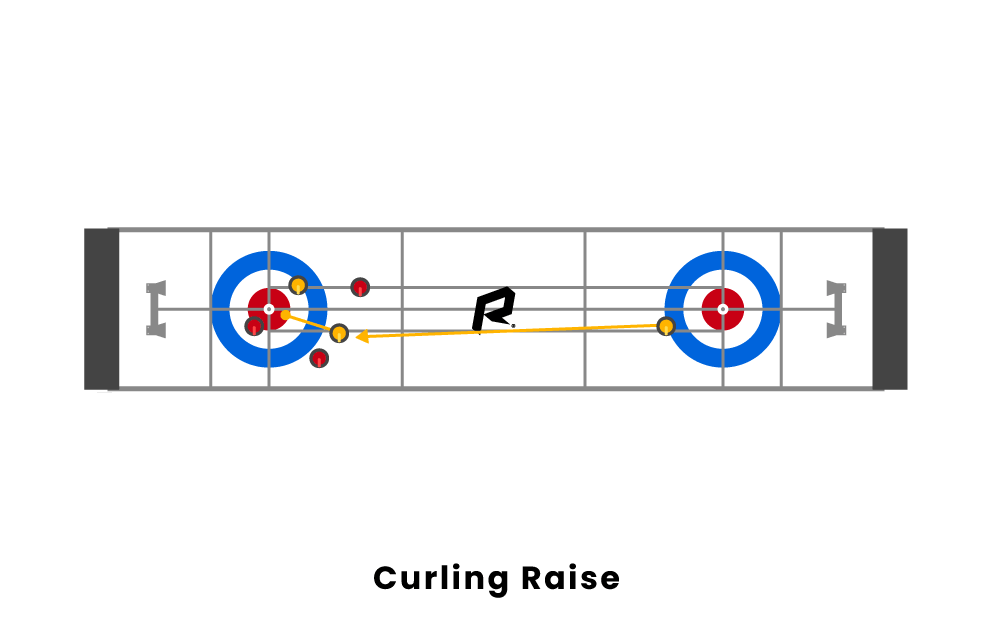 Now that we have learned about most of the upweight shots you may throw in a game of curling, we will now focus on one that can be considered both an upweight shot and a lighter weight shot. It is called a raise. A raise is exactly what it sounds like. A stone that is currently in-play gets raised to another position on the sheet, usually into the house, or closer to the button if it was already in the house.

Raise shots are used to promote a team's own stone to a better place on the sheet - usually into the house or closer to the button. The raise is a versatile shot because it can be used to:

Here's a scenario: your team has the hammer, and there's a corner guard or two in-play. You have one stone in the 4 Foot and 12 Foot, but an opponent's stone is in the 8 Foot and you cannot throw a takeout. The raise shot helps you make an attempt to score your two points.

Here's another scenario: your team has a center guard near the 12 Foot, and your opponent has a stone in the back button area. By raising your stone to the button, you are significantly reducing your opponent's chances of scoring 2 points with the hammer. If you execute the shot perfectly, your team may be able to steal the end.

Based on these scenarios, we can observe that the raise shot is quite versatile. It can be used for offensive or defensive purposes in one end!

An extension of the raise shot is a double raise shot. A double raise will involve a thrown stone raising one stone on to another stone. This newly raised stone will then move towards the house, and is the second raise of the shot.

This type of shot can be extended to a triple raise, or any number of raises desired. However, the more raises that are included in the shot will make it more difficult, as the angles required to successfully execute the shot leave a smaller room for error. You will also need more weight to make the shot a success.