How To Pebble The Ice In Curling 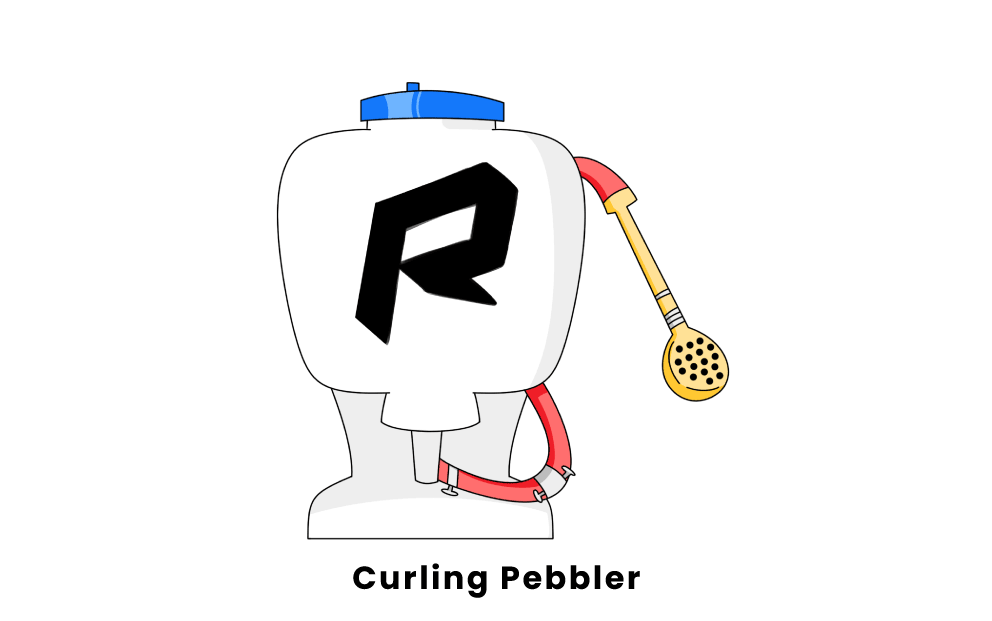 If curlers were to slide curling stones on smooth ice, a curling stone would travel no more than 20 feet. By texturing - or pebbling - the ice, the stone can travel farther.

To pebble the ice, a pebbler is used. A pebbler is essentially a backpack that carries hot water with a hose that comes out the bottom.

After the pebbler is filled with hot water, a person will begin to pebble the ice. This is achieved by moving the pebblehead in a horizontal arc while walking backwards (as you do not want to step on the pebble that was just created). This process is repeated until three or four coats of pebble are on the ice.

If you have watched curling before, you have most likely seen it be played on dedicated ice. There are two types of curling ice called Dedicated ice and Arena ice.

Dedicated ice is considered to be ice that only curlers will use. There will never be any ice hockey players or figure skaters using the same ice surface. On dedicated ice, you will see all of the curling lines and houses painted under the ice. Additionally, the hacks are already frozen into the ice, and are not removed.

Since curling ice is best kept between 22-24 degrees Fahrenheit, dedicated ice is able to be maintained at this temperature. The colder the ice is, the better playing surface you will have for your games. Typically, curlers will wear a pair of shoes that they only wear on the ice. This helps keep any dust or other debris off the ice, and keep the playing surface clean and consistent.

Arena ice is considered to be ice at an ice arena that is transformed into a curling surface. This means that ice hockey players and figure skaters may use the ice during other times of the day.

On arena ice, the ice rink may paint all of the curling lines and houses under the ice. Otherwise, the houses are scribed into the ice during setup, and the hacks are frozen into the ice. Usually, arena ice will not have the sidelines painted, which means your curling club will use some other marker on the ice (like cones) to indicate where the sidelines are located. Since other people utilize the same ice, it is not kept as cool and clean as dedicated ice.

Do not let arena ice discourage you from playing! There are many curling clubs across the United States that only use arena ice. Curling clubs will work with the people at the ice arena to help get a clean, level playing surface for your games.

Now, we will learn how to use a pebbler. Follow these steps, and you will be pebbling the ice at your curling club in no time!

Before you begin to pebble, you will need to fill your pebbler. Make sure that you twist the cap off, keep the filter in, and double check that your water is at least 120 degrees Fahrenheit. On each pebbler, there is a small line at the top of the water tank that tells you how high to fill the pebbler. Stop adding water when the water level reaches this line, and twist the cap back on.

On some pebblers, there is a valve that needs to be turned to start the flow of water, while others do not. Make sure that you keep holding the hose upright so that water doesn't spray all over you and your fellow curlers.

It should take you about 45 seconds to pebble one sheet (going from one hack to another). Each sheet should receive three to four coats of pebble before each game of curling.

Make sure that you pebble behind the hacks as well. Wherever a curler could be standing on the ice must be pebbled. It doesn't have to have as many coats as you did on the rest of the sheet, but should be well pebbled.

If you run out of water while pebbling, go back and refill your pebbler. Repeat the process until you have finished pebbling.

After pebbling, it is important to cut the top part of the pebble off. This is because each pebble looks like a peak, and can have different heights. By nipping the top of the pebble, a uniform, level playing surface is created.

This is where the nipper comes in to play. A nipper contains a large metal blade, about six feet wide, that is pushed along the ice to cut, or nip, the top of the pebble. Around the blade is a guard so that nobody will harm themselves from the blade of the nipper. Lastly, a mop follows the blade to collect all of the nipped pebble peaks (ice shavings).

Other Preparations for Arena Ice

If you are using arena ice, your curling club's hacks will also need to be frozen into the ice. This is done by pouring hot water on to the bottom side of the hacks. Then, the hacks are placed into position (given by some reference point or marker on the ice), and stood on for five to ten minutes. This ensures that the water has time to freeze around the hack, thus creating a tight seal so the hack stays in place for the entire game.

Pages Related to How To Pebble The Ice In Curling