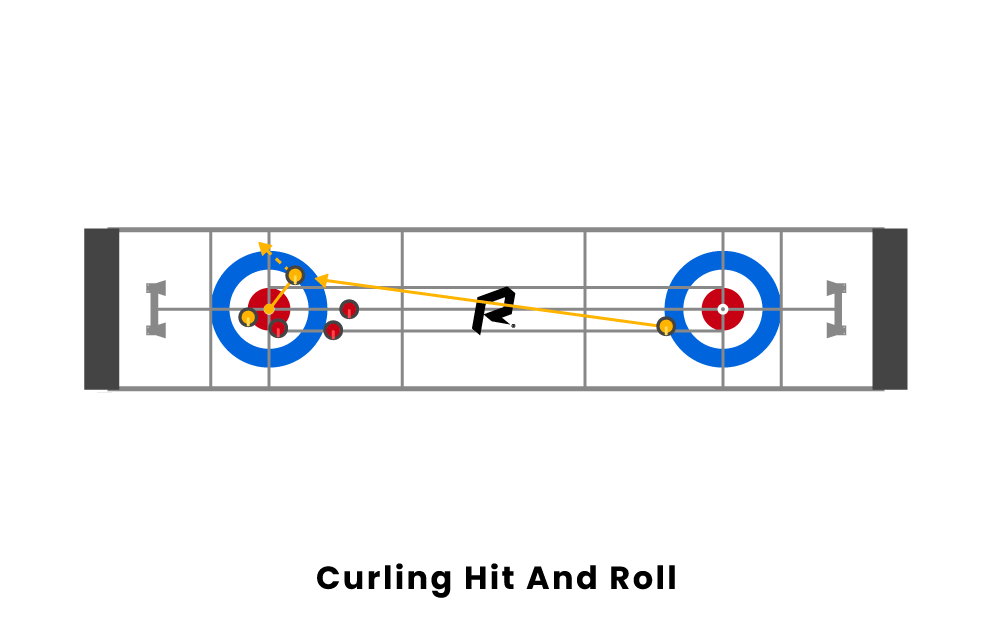 Now that we learned about takeouts, we can learn about another upweight shot, called a hit and roll. A hit and roll is exactly what it sounds like - a stone is thrown, hits another stone, and rolls to its desired location. While it may seem easy to explain, hit and roll shots are some of the most precise shots thrown in a game of curling. Together, we will learn about hit and rolls, how they relate to takeouts, and the split times required for a hit and roll.

Purpose of Hit and Rolls

Hit and rolls are commonly used to reach the Button or Top 4 Foot area without drawing to the house. Sometimes, the guard zone may be cluttered with a couple center guards, and it is pointless to try and remove the guards. Thus, a hit and roll allows your team to still try and throw a rock that can be considered for scoring. Hit and roll shots are usually played in the later parts of an end, but there are some instances in which a hit and roll will be played earlier in an end.

When throwing a hit and roll, teams will throw their stone:

Important: With hit and roll shots, the team throwing the rock most likely wants it to become shot rock, or block their opponent's path to the button. Since these shots are played later in an end, there is a chance that the rocks in the 8 Foot and 12 Foot may not count for scoring. Thus, it is okay if you hit your own stone and roll in. Hitting your opponent's stones work just as well.

There are a few special hit and roll shots that we will explore now. They are:

Around the Horn Shots

Hit and Roll Behind a Guard

In some curling games, there may be a time where a team is trying to blank an end. In this case, the team will want to keep the house free of any stones. Thus, the opponent will try to hit the stone in the house and roll behind their center guard. This forces the team trying to blank the end to make a difficult takeout on the stone behind the guard.